Faculty of the Arts, Social Sciences and Humanities, Project Air, School of Psychology 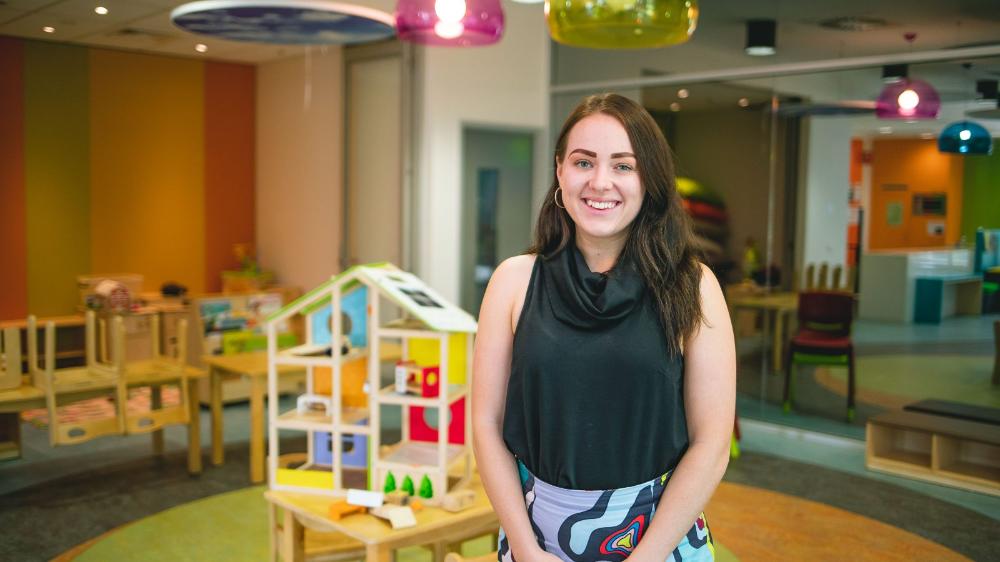 Kayla Steele has proven she has the right pitch when it comes to showing her efforts to stem the tide of personality disorders occurring across families. Her research has been convincing enough to win the annual Universities Australia award in the Pitch it Clever competition held recently at Parliament House in Canberra.

Kayla is in UOW’s Project Air team and conducts research on parenting with Borderline Personality Disorder.

UOW has developed a brief intervention for parents with complex mental health issues such as personality disorder. Kayla’s PhD research investigates the impact of this intervention on the lives of at-risk parents and their children.

Kayla says it’s possible to work together to break this inter-generational cycle of complex mental health issues such as personality disorder.

She says it’s hard enough being a parent but extremely challenging for those with personality disorder.

Kayla’s supervisor is Senior Professor Brin Grenyer who is Director of the Project Air Strategy for Personality Disorders, an initiative of the NSW Ministry of Health to improve pathways of care and researching new approaches to treatment. The Strategy is now being implemented across many States and Territories in Australia. Project Air has worked with more than 6,000 mental health clinical staff engaging in consultation, training and research on personality disorder treatment.

"The work we are doing is to help not only parents struggling with managing mental health challenges and their parenting, but also changing the family environment so their children understand what is going on and remain feeling secure and connected to their parent," Professor Grenyer said.

"Kayla Steele's PhD program takes this work to the next level in that she now has the opportunity to scientifically validate the Project Air approach we have developed and tested with clinicians in practice over the past five years."

Kayla’s co-supervisor and Senior Research Fellow from the School of Psychology, Dr Michelle Townsend, described the PhD candidate as an outstanding student who really wants to make a difference within the community.

“She is very applied in her approach and one can sense the passion she possesses within her course of research.”

Dr Townsend said Kayla was a very good communicator and it did not surprise her that she was able to explain in such a short pitch time to the Universities Australia judges what is a very complex topic.

Kayla herself acknowledged the support of her supervisors and colleagues at Project Air Strategy for Personality Disorders and the School of Psychology along with Alex Pike and Bec Sandridge who contributed their artistic talent for her competition bid.

“But above all, I would like to acknowledge anyone living and parenting with a complex mental health issue, such as Borderline Personality Disorder, as this research would not be possible without their courage.”

Kayla eventually hopes to have a balanced working life through assisting at-risk people in the community and also gaining a position in academia.

Pitch it Clever is an annual competition from Universities Australia challenging early career researchers to communicate their research and why it matters to non-specialist audiences via video. The students’ challenge is to create a 1- to 2- minute video that clearly unpacks their research and how it can be applied.

The video needed to capture the attention of not only university leaders, but industry, government, potential donors and the public. On the night of the awards, Kayla was called on stage to answer a question about her research and she gave an impromptu speech.