UOW academics are regularly rewarded and acknowledged for their research outcomes and impact with external awards and prizes. 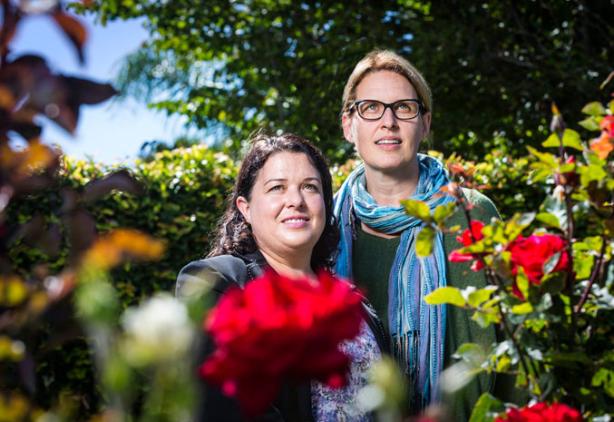 The Australian Synchrotron Research Award for early career researchers has been awarded to Dr Wei Kong Pang from the University of Wollongong. Dr Pang is an ARC Future Fellow and Senior Research Fellow at the Institute for Superconducting and Electronic Materials (ISEM).

Two University of Wollongong (UOW) academics have been named as recipients of New South Wales Premier's Prizes for Science and Engineering in recognition of their pioneering research work.

UOW’s ARC Future Fellow Dr Wei Kong Pang is the recipient of the Australian Synchrotron Research Award for his contribution in the popularization of synchrotron diffraction techniques. Dr Pang’s research (based at the ISEM), focuses on understanding and developing rechargeable metal-ion battery technologies, including the atomic-scale characterisation of electrode materials, where he has made significant advances in understanding their structure and chemistry, using a variety of neutron and X-ray scattering methods. As part of the award Dr Pang will present the plenary address at the Australian Synchrotron User Meeting 2020.

Professor Danielle Skropeta has been awarded the Royal Australian Chemical Institute’s Margaret Sheil Leadership Award for 2020. The award recognises Danielle as an outstanding female leader working in the chemical sciences, and who has helped to inspire and mentor junior female chemists and/or help to provide a more equitable work place.

Distinguished Professor David J. Adams, CEO and Executive Director of Illawarra Health and Medical Research Institute (IHMRI) has been selected as Fellow of the Australian Academy of Health & Medical Sciences, recognising his outstanding contributions to the health and medical research landscape in Australia.

Dr Voltaire A. Velazco together with his team from UOW’s School of Earth, Atmospheric and Life Sciences, are co-recipients of the NASA Group Achievement Award for outstanding contributions to the Agency's mission. The award, which was recently conferred on CAMP2Ex (Clouds, Aerosols, Monsoonal Processes - Philippines Experiment), is based on Dr. Velazco leading the CAMP2Ex-HABAGAT team and supporting NASA’s airborne measurements aimed to better understand water vapor, aerosols and gas-phase chemistry at the Total Carbon Column Observing Network (TCCON) Philippines site. https://youtu.be/QwO9jmaQ_cs

Two podcasts co-produced by the University of Wollongong’s Associate Professor Siobhan McHugh have received top honours in the New York Festival Radio Awards,  which has bestowed honours on the best audio storytelling from around the world since 1982. Professor McHugh, a journalism lecturer in the School of the Arts, English and Media, was part of the team behind The Last Voyage of The Pong Su and Gertie’s Law, which each took out a Gold medal in their respective categories. Read More.

PhD candidate Samantha Wade was awarded the Dr Margaret Gardiner scholarship for medical research this International Women's Day. "The awards encourage women n our community who might not otherwise have the opportunity, to expand their knowledge, skill and experience in a field of their interest or in which they have shown great potential" Says committee chair Vicki Tiegs. Read more

UOW PhD candidate Kayla Steele is the winner of the Pitch It Clever Universities Australia Award for her video ‘Parenting with borderline personality disorder’.

Pitch it Clever is an annual competition from Universities Australia challenging early career researchers to communicate their research and why it matters to non-specialist audiences via a 1-2 minute video. Watch her winning video here.

Kayla is supervisored by Professor Brin Grenyer and Dr. Michelle Townsend. The award involves a $1,000 cash prize, and return flights, accommodation and entry to the Universities Australia Higher Education Conference.

Engineering student Meg Cummins is the recipient of the Jacobs Engineering Consulting Award at the Top100 Future Leaders Awards. The awards are recognised as one of Australia’s top future graduate talents.  Students are put through their paces and given a taste of a full graduate recruitment process – appearing in front of Australia’s top employers for interviews. Read more.

Three lecturers at the University of Wollongong (UOW) have received national recognition of their dedication, leadership, and support of student learning.

Dr Hironori (Nori) Onuki, from the Faculty of Law, Humanities and the Arts, Associate Professor Montserrat Ros, and Dr Sasha Nikolic, both from the Faculty of Engineering and Information Sciences, were all recipients of the Citations for Outstanding Contributions to Student Learning during the 2019 Australian Awards for University Teaching. Read more.

Professor Allen Nutman from School of Earth, Atmospheric and Life Sciences, has been awarded 2020 Mawson Medal from the Australian Academy of Science.

He has made some fundamental discoveries concerning the evolution of early Earth, through numerous field campaigns in arduous conditions. He has revolutionised our understanding of Greenland geology by applying necessary, detailed geological mapping and applying necessary geochronological dating obtained through state-of-the-art geochronological techniques which he personally obtained.

He is considered to be one of the leaders in the understanding of early history of Earth. Professor Nutman also made significant contributions to ancient rocks through successful international collaboration.

Director of the Legal Intersections Research Centre at UOW’s School of Law, Professor Nan Seuffert has been named the 2019 Legal Academic of the Year at the NSW Women Lawyers Achievement Awards - recognised for excellence in research, her advocacy and support for the legal rights of all women, and for advancing women within the legal profession. Read more

The Australian Academy of Science has named UOW PhD student Ms Allison Broad as one of the recipients of the 2020 Max Day Environmental Science Fellowship Award. Ms Broad, an Early Career Researcher in Marine Science in the School of Earth, Atmospheric and Life Sciences, will study the impacts of anchor scour on the seafloor near Port Kembla. Read more

IHMRI CEO Distinguished Professor David J Adams was awarded the position of Fellow of The Physiological Society. He is only the fourth person in Australia to be offered a fellowship. The rank of Fellow is an elite member status reserved to honor distinguished leaders who have demonstrated excellence in science, have made significant contributions to physiological sciences and related disciplines.

UOW’s Senior Professor Paul Cooper was awarded the prestigious James Harrison Medal at the recent Australian Institute of Refrigeration, Air conditioning and Heating industry awards in Sydney.  The Sustainable Buildings Research Centre Director was awarded the institute’s highest honour for his focus on developing the most efficient and effective engineering solutions to improve the quality of living and working environments for all.

New fellows to Academy of Social Sciences:  Professor Gordon Waitt, Professor Mark McLelland and Professor Terry Walter were appointed as Fellows of the Academy of the Social Sciences in Australia - an honour conferred for scholarly distinction in research and the advancement of social sciences.

For Gordon Waitt (Faculty of Social Sciences) - his qualitative research methods bring to the fore the importance everyday experiences to address key global challenges such as household sustainability, energy poverty and urban liveability.

For Mark McLelland (Faculty of Law Humanities and the Arts) - his historical work on the globalisation of western discourses of sexology, particularly in Japan, has provided previously unexamined data for scholars working on the history of sexuality and on minority sexual histories and cultures in both western and East Asian contexts. Congratulations to both from the UOW research community.

For Terry Walter (Faculty of Business) – his applied empirical research in finance theory as it relates to the behaviour of capital markets; models of earnings management, takeovers and mergers and initial public offers, behavioural finance, executive remuneration and corporate governance, among other topics.

The ARC Centre of Excellence for Electromaterials Science (ACES) has taken out the coveted Frontiers Research Award at the 2019 Research Australia Health and Medical Research Awards.The project team led by ACES Chief Investigator Associate Professor Jeremy Crook, ACES Director Professor Gordon Wallace and ACES Research Fellow Dr Eva Tomaskovic-Crook from the University of Wollongong, were acknowledged for their work in creating novel ways to use human stem cells to assist in regenerative tissue engineering research for the treatment of diseases. The group is investigating the use of electrical stimulation to influence cell behaviour as a way to treat traumatic brain injuries and neurological disorders such as epilepsy and Parkinson’s disease.

Dr Sharon Crozier-De Rosa, Senior Lecturer in History from University of Wollongong, has been awarded a 2020 National Library of Australia (NLA) Fellowship for her project: ‘Memory-Keepers: Women activists’ strategies to document their history and preserve their own memory’ Only 10 of these distinguished fellowships are awarded yearly. They support top researchers – from within and outside of Australia – to make intensive use of the NLA’s rich and varied collections through residencies of three months.

Professor Frank Deane is the 2019 winner of the AACBT Distinguished Career Award - for outstanding contributions to Cognitive or Behavioural research.

Associate Professor Martina Sanderson-Smith: The Australian Society for Microbiology (ASM) has awarded the ASM Frank Fenner Award to A/Prof. Martina Sanderson Smith from the School of Chemistry and Molecular Bioscience, for her distinguished research contributions in Australia in the field of microbiology. She receives a plaque, $1000 prize money and the opportunity to present her work at the Fenner Lectures at the ASM Annual Scientific Meeting.

Dr Dominique Tanner: Geologist Dr Dominique Tanner, who is researching how precious metals are concentrated in undersea volcanoes, is one of the ABC’s Top 5 Scientists for 2019. The Top 5 program is an annual quest to find five of the brightest science communicators in Australia, to help them share their ideas with the country. ABC broadcaster Robyn Williams, presenter of RN’s The Science Show, was one of the adjudicators of the Top 5 Scientist applicants. Dom will be based at ABC studios throughout July working with ABC journalists and broadcasters to spread the word about science and her research.

Professor Liz Halcomb: Professor Liz Halcomb in the School of Nursing was awarded the prestigious Bridges Web Medal from the Australasian Association for Academic Primary Care. The medal recognises those who have made internationally significant teaching and/or research contributions to academic primary care. Notable, as the first nurse to win a medal, historically won by GP’s and Research Psychologists.

Dr Natalie Matosin: Dr Natalie Matosin's research provide critical steps towards new medications to improve quality of life for people who suffer from mental illness. For her research she was a recipient of the 2019 New South Wales Tall Poppy Science Award. The prestigious NSW Young Tall Poppy Science Awards from the Australian Institute of Policy & Science (AIPS) attract nominations from young researchers across a diverse range of fields and many universities.

Associate Professor Xiaoqi Feng: Founding Co-Director of PowerLab at School of Health and Society, has been awarded the Research Award for NSW/ACT Parks and Leisure Australia Awards of Excellence. The award is for Dr Feng’s research using longitudinal data to understand how much green space is needed to maximise health in children and mums in communities across Australia.

(02) 4221 3386 research-services@uow.edu.au
Looking for someone in particular? Meet the research services team
Close