Justice, equality for women the focus of Nan Seuffert’s research

A University of Wollongong (UOW) Professor has been named the Legal Academic of the Year at the NSW Women Lawyers Achievement Awards in Sydney.

On Friday 23 August, Director of the Legal Intersections Research Centre at UOW’s School of Law Professor Nan Seuffert was recognised for excellence in research, her advocacy and support for the legal rights of all women, and for advancing women within the legal profession.

The NSW Women Lawyers Achievement Awards recognise and celebrate the achievements of outstanding female lawyers, mentors and firms that have achieved excellence in their area of practice and helped create opportunities for women in law.

“I’m thrilled to be honoured by the WLANSW, and all of the amazing women there,” Professor Seuffert said.

“Work on gender and law across so many areas is still crucial, and I hope to continue to contribute to social justice in through a number of planned projects on domestic violence and the law and in other areas.” 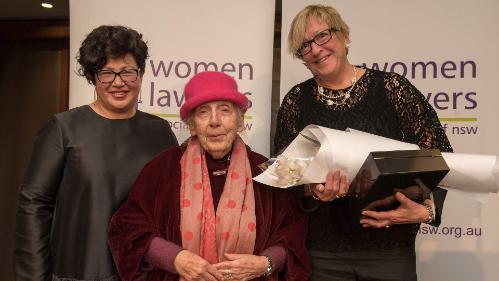 Professor Seuffert teaches and researches in law, society and culture with a focus on gender and sexuality.

She forged a reputation as a leading scholar on feminism and the law through her early work on lawyering for female survivors of domestic violence. Her research was used to educate lawyers in the US, Canada, Australia and New Zealand.

In legal practice, she established a pro bono program to represent female survivors of domestic violence at a large law firm in Boston, which became a United States-wide model for other law firms.

Professor Seuffert’s current research projects all have a focus on access to justice and equality for women.

With UOW Associate Professor Trish Mundy, she recently completed an evaluation of the YWCA Domestic Violence Intervention Service in Nowra, funded by a National Australia Bank Community Impact Grant, and a pilot project on the advancement of women in law firms in partnership with the Women Lawyers Association of New South Wales.

Her work is recognised internationally; for example, her book, Jurisprudence of National Identity, provided the theme for the US Association for the Study of Law, Culture and the Humanities Conference.

In her nomination, a number of colleagues and young academics at UOW provided glowing endorsements of Professor Seuffert’s contribution to UOW since taking on the director’s role in 2012. She has generously shared an abundance of knowledge and skills and developed innovative mentoring programs for women, contributing to the advancement of women into careers in legal academia.

Professor Mundy, a finalist in two categories, was also in attendance among 450 people at the awards night.

“Nan won a very competitive category, it was such a well-deserved win,” Professor Mundy said.

“There was a decent sized legal contingent from Wollongong there and pretty much all of them were UOW graduates.  I had such great feedback about our UOW graduates, too, from Sydney lawyers.

“I met several UOW alumni, lawyers who have had our students on placement and spoke so glowingly of their skills and capabilities.”

UOW School of Law Dean Colin Picker said the school and the larger law school family was proud of the honour bestowed upon Professor Seuffert.

“I was thrilled to hear of the honour bestowed upon Nan,” Professor Picker said.

“There is no doubt that her great work within and without the University, engaging with stakeholders and relevant communities, is the model of an academic.

“Striving to develop her field, even as she works for social justice in our communities, and teaches our students to be leaders in the future.”

Women’s police stations in Australia: would they work for ‘all’ women? Committed to social justice, 30 years on Frydenberg’s directions to ASIC throw the banking royal commission under a bus
Close