Since 2012, thanks to a URC Research Infrastructure Block Grant, WIGL manages an automated gas sorption analyser. This instrument provides a measure of surface area, pore size and volume distribution, using the principle of physisorption.

Physisorption, or physical adsorption, is the process by which gas and vapor atoms and molecules are adsorbed onto the surface of a solid and which relies on weak attractive forces, usually measured at cryogenic temperatures. It is also the experimental means by which one can quantify the surface area of a solid, its pore size and pore volume distribution.

The instrument is a Quantachrome Autosorb-iQ MP. It allows surface and pore size/volume distribution to be determined with high precision, even in the micropore range (<2 nm). Two samples can be prepared and analysed simultaneously. Several gases are available for performing analysis (nitrogen or carbon dioxide).

See below for a list of projects undertaken on this instrument. 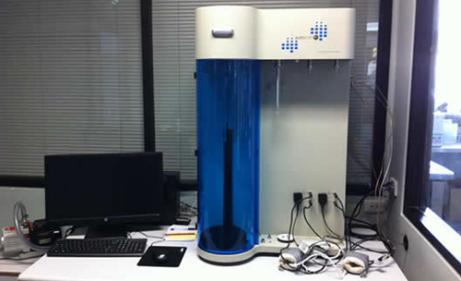 Magnetic resonance imaging (MRI) has become one of the extensively used noninvasive tool in patient healthcare, due to its high spatial resolution, penetration depth for soft tissues and real-time monitoring features. T1 -weighted MRI (T1 -MRI) provides a bright signal compared with the dark background, resulting in enhanced detection accuracy. Paramagnetic compounds including Gd3+, Mn2+, and Fe3+ have large numbers of unpaired electrons, thus they can be used as T1 contrast agents.

It has been proven that the accessibility of water molecules to the paramagnetic centers is the key factor for enhancing the resolution and signal-to-noise of T1-MRI. Many material systems such as organic, inorganic and organic/inorganic hybrid nanoparticulate systems have been introduced in the nanotheranostics to improve the efficacy of T1-MRI, among which biocompatible mesoporous silica nanoparticles(MSNs) have been considered as an excellent theranostic vehicle to address the complex requirements in cancer therapy due to their well-defined nanoporous structures, tunable pore sizes, large surface area and abundant surface chemistry.

Lithium/sulfur battery is one of the most promising cathode candidates due to its highest theoretical specific capacity of 1675 mAh g-1 and very high energy specific density of 2600 Wh kg-1among all the solid cathode lithium battery system. In addition, sulfur is abundant in nature, low cost and non-toxic. However, poor electrical conductivity of sulfur, dissolution of long chain polysulfides into electrolyte and change of volume during sulfur to sulfides transformation is the main drawback. By manipulating crystallite size and morphology of sulfur particle, it is possible to increase the performance of Li-S battery. In this work, we will focus to fabricate porous and high surfaced area sulfur with very fine grain size by applying simple heat treatment of sulfur to achieve high performance Li-S battery.

Water-rock interactions are important in controlling the fractionation of U-Th series nuclides in sediments and waters, useful in estimating sediment residence times and groundwater ages. In particular, mineral weathering can result in radioactive disequilibrium between 234U and 238U; however, the extent of fractionation is not well understood. In this study, we measure the amount of uranium and changes in the 234U/238U activity ratio that are leached from biotite, under well-controlled conditions in continuous flow-through experiments. In order to quantify the rates of biotite dissolution, uranium leaching and changes 234U/238U activity ratio in our experiments, we measure the surface area of the initial and final biotite samples.

Magnesium oxide (MgO) has shown great potential as a base catalyst and as a catalyst support for metal nanoparticles. The preparation of MgO can be straightforward; typically from heating the hydroxide or carbonate. The morphology of magnesium hydroxide can be greatly influenced by the synthesis conditions; such as solvent choice, surfactants or precipitating agent. The morphology of this hydroxide pre-cursor can be maintained during this transition and as such selectively controlling the growth of the pre-cursor is attractive with respect to catalytic activity. In this project, the preparation of magnesium oxides will be investigated in order to corroborate base catalytic site density to different morphologies.

Metal-organic framework materials consist of metal nodes linked by organic bridging ligands which typically form crystalline structures; with potential applications in gas-storage, chemical sensing, drug-delivery and catalysis. The versatility of MOFs lies in their ability to incorporate into the structure useful substituents such as basic amino groups, or tether points for other reactive molecules. Certain classes of MOF materials possess extremely high surface areas and much greater pore dimensions when compared to more traditional heterogeneous catalysts such as other structured materials like zeolites. These examples make MOFs very desirable as potential catalysts; as a result we intend to investigate methods to tether high activity homogeneous catalysts onto robust, high surface area MOF materials.

Flexible electrochemical supercapacitors, shown to be promising modern energy storage systems, have given rise to wide interests for their potential applications in portable electronic devices, hybrid electric vehicles, and medical devices. Although carbon materials, transition metal oxides and conducting polymers have been widely studied as the electrode material for supercapacitors, only several carbon materials, including carbon nanotubes (CNTs), carbon fibers and graphene, have displayed favourable flexibility and show promising application for freestanding and flexible supercapacitor. In this project, we will focus on the flexible electrode material including CNTs, carbon fibres and graphene, and study their applications of supercapacitor.

Molybdenum oxides (MoO2) are attractive host materials for lithium storage because of their low electrical resistivity, high electrochemical activity toward lithium, and affordable cost. In particular, molybdenum dioxide (MoO2) with a rutile structure possesses a high theoretical capacity of 838 mAhlg. However, the specific capacity decays dramatically due to the significant volume change during the lithiation and delithiation processes. Carbon can offer a higher interfacial area for transportation of both lithium ions and electrons; moreover, it provides the space to buffer the volume changes. Among various carbon materials, carbon spheres (MCS) have been reported to show good performances because of their high thermal stability, large surface area, uniform pore diameter, high pore volume and interconnected pore structure. In this work, a MoO2/C spheres composite material is prepared by hydrothermal method followed by calcination process.

Our knowledge of past climatic variability has greatly improved over the past few decades; however, our understanding of how soil erosion and sediment transport regimes respond to climate change is limited. To address this issue, the sediment residence time, which represents the time spent by sediments in weathering profiles and fluvial systems (including temporary alluvial storage), is an important parameter. Recently, the uranium isotope composition of sediments stored in fluvial deposits has offered a way to quantify past variations in the sediment residence time. For instance, a recent study of the Murrumbidgee River basin, in south-eastern Australia, showed that catchment erosion is predominantly controlled by vegetation cover and surprisingly, runoff playing only a secondary role. In this project, we use the surface area of sediments deposits in the Gulf of Carpentaria combined with their uranium isotope composition, to re-construct past variations in sediment transport in tropical north-eastern Australia. These results will be compared to the Murrumbidgee to examine the differences and similarities between the fluvial response to climate change in tropical and temperate Australia.