An exhibition showing a sample of the more than 90 contemporary artworks donated to the University of Wollongong (UOW) Art Collection by Mr. John F. Morrissey is currently on display at the Wollongong campus.

Mr Morrissey’s prolific and generous contribution to UOW’s Art Collection is celebrated in The Morrissey Donations, which is on display at UOW Gallery in the Jillian Broadbent Building.

The Morrissey Donations acknowledges and celebrates the generous and on-going patronage of Mr Morrissey to UOW and explores, in part, the relationship that exists between the UOW Art Collection and one of its most significant donors.

Professor Davidson was thrilled to tour the exhibition and praised Mr Morrissey for his unwavering dedication to adding to the cultural fabric of the University.

“The University of Wollongong is immensely grateful to John F. Morrissey for his contribution to the cultural life of the University,” Professor Davidson said.

“The thoughtfulness of Mr Morrissey’s donations and the consideration he has given to how his donations might directly benefit the University community and indeed the nation is remarkable.

“Students, staff and the wider community have the opportunity to see outstanding works by eminent and emerging artists across the campus thanks to Mr Morrissey’s generous donations from his private collection.” 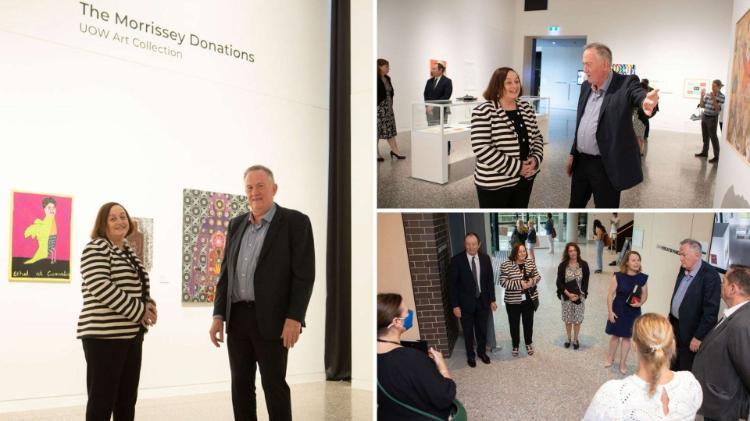 Mr Morrissey has carefully curated his artwork donations, selecting artworks that are “vital, alive and challenging”.

“I'm quite interested in the work of New-Zealand born Australian artist Nancy Borlase. Nancy is the most underrated artist in Australia,” Mr Morrissey said.

The artworks by Nancy Borlase were initially offered to UOW due to the artist’s links with the NSW Trades and Labour Council. Mr Morrissey instantly recognised her work as having social and historical interest to students, researchers and the wider Wollongong community.

“UOW now has the greatest repository of Borlase's. They are, in the Sydney art scene at the time, the only record of people who were involved in socialist causes in Sydney in the 1950s and 60s and early 70s,” Mr Morrissey said.

This exhibition represents just a small selection of the artworks that John Morrissey has donated to UOW. Selected works are rotated on display at several locations across campus including the UOW Library and are regularly loaned into exhibitions at galleries around the country.

The Morrissey Donations will run until 30 March 2022 in the UOW Gallery in the Jillian Broadbent Building (Building 29) on the UOW Wollongong campus. It is open Monday to Wednesday, from 10am to 4pm.