How creativity and courage propelled arts powerhouse to the top

Lisa Havilah has always lived at the intersection of creativity and pragmatism.

These dualling concepts defined her childhood, as the daughter of a ceramicist and an agronomist, and framed her experience at university, where she undertook a double degree in creative arts and law.

It is this blend of creativity and pragmatism, of arts and analytical thinking, that has propelled her to the forefront of Australia’s cultural scene.

Now Chief Executive of Sydney’s Powerhouse Museum, Lisa said being able to access both the analytical and the creative has helped her to carve out her role as one of the most innovative and forward-thinkers in the arts. It is essential to be able to conceive of the grand idea, and then have the tools to put it into practice.

“My mum was a ceramicist, and she had a studio at our home,” Lisa says of her childhood spent on a farm in Berry, on the NSW South Coast. “She was a very creative person and always encouraged that in all of us children. My dad was an agricultural scientist, so we always had that combination at home.

“So much of my work and my projects involve a combination of creativity and strategic thinking.”

Today (Thursday, 3 November), Lisa received a Doctor of Letters (honoris causa) from the University of Wollongong (UOW). The award was conferred during the graduation ceremony for the Faculty of the Arts, Social Sciences and Humanities.

Lisa said she was thrilled to receive the honorary degree, which continues her long association with UOW. She undertook her own degree at UOW, beginning in 1991, a Bachelor of Creative Arts combined with a Bachelor of Laws.

“My relationship with UOW has stretched right across my life. My dad was part of the class who took the first computer engineering degree, so I spent a lot of time on campus when I was a kid. We would play at the Duck Pond or hang around the library while my dad studied,” she says.

“I had such an amazing experience at UOW and I gained so much from my education. Art schools are becoming much rarer these days and the retention and expansion of the art school at UOW is critically important for Australia’s arts ecology.”

A self-described “disengaged student” while in high school, Lisa failed her HSC and went on to study at West Wollongong TAFE, where she completed an Associate Diploma in Fine Arts and Painting. From there, she was enrolled at UOW, in the Bachelor of Creative Arts, majoring in painting and creative writing.

After a year or two of studying, Lisa decided to add law to her degree.

“At the time, they didn’t have a double degree in creative arts and law, so I went to the then Dean of Law in the School of Law, Professor Jack Goldring, and asked him if I could also study law.

“Professor Goldring said I could do that if I studied Law 101, an introductory course, over the summer. He said ‘if you pass, I’ll see about that degree’.

“I never wanted to study law, I just wanted to make my Dad happy. But when I started doing it, I loved it. It gave me a level of discipline that has continued to be really important to me.”

Lisa was able to combine her degrees, but life, as it so often does, had other plans. Alongside her husband Glenn Barkley, a ceramicist and writer whom she met at University, Lisa established Project Contemporary Artspace in Wollongong. It was the only artist-run space in the city, and since it was established in 1995, has provided countless opportunities for artists to exhibit and perform their work. 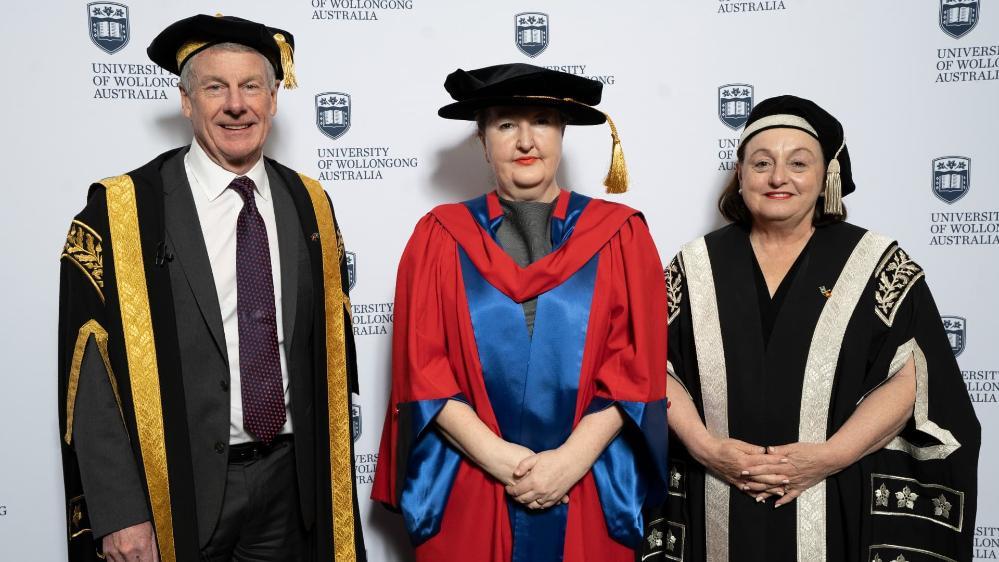 Something had to give and for Lisa, that was her time at UOW. However, her fearlessness and passion helped to establish Project Contemporary Artspace as one of Wollongong’s foremost art galleries and cemented Lisa as one of the most creative talents in the art world.

From Project Contemporary Artspace, Lisa took over the role of Associate Director of Casula Powerhouse Arts Centre in Western Sydney, where she became known for her daring pursuit of brave, big ideas. In 2004 she was appointed Chair of the NSW Minister for the Arts’ Western Sydney Arts Program, followed the next year by Director of Campbelltown Arts Centre.

“For the first part of my career, at Casula and Campbelltown, I loved working very closely with communities. We produced large-scale arts projects and I enjoyed the collaboration and being able to support artists in different ways. It really showed the possibility of what museums and art galleries can be for their communities.”

Seven years later, Lisa became the Director of Carriageworks, in Sydney, which she transformed into a vibrant, multi-creative urban arts precinct. Now, she is the Chief Executive of the Museum of Applied Arts and Sciences, more commonly known as the Powerhouse Museum.

As she tackles the challenges that come with a high-powered role at the centre of the national art scene and overseeing institutions that are beloved by all members of the community, Lisa draws on her strengths in communication, collaboration, and creativity.

Lisa says she loves being able to bring art to life in new and unexpected ways, and to create projects that both reflect and rejuvenate society. It is a modern approach to culture; accessible, authentic and in service of artists and their communities.

“I love connecting people with new ideas and new ways to think about things. I see how institutions like the Powerhouse can impact and add value to someone’s life.”