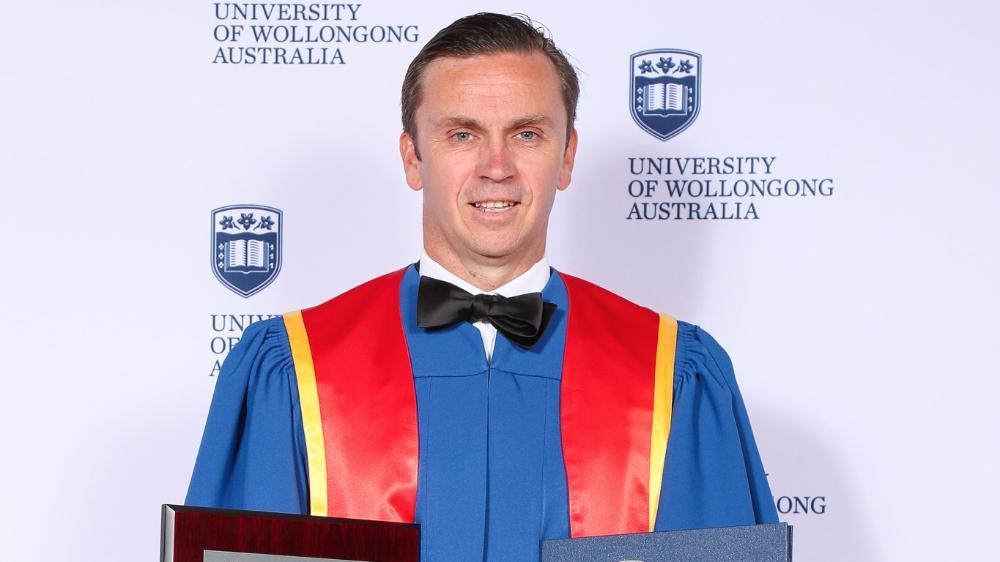 Fellow of the University

Chancellor, I present to you Timothy Berry.

Tim Berry has played a leading role in advancing the knowledge economy in the Illawarra and beyond, and in inspiring the next generation to see the infinite potential in advanced mathematical studies.

Tim is co-founder of Tibra Capital, a global securities firm specialising in high-frequency equities trading, arbitrage, market making and algorithmic trading. Established in 2007 with Tim as Global Managing Director, he navigated a steep learning curve to lead rapid and phenomenal growth, peaking at over 250 employees across the globe. The company trades more than $1 billion in equity volume monthly and manages up to 20,000 transactions each day.

Though it has been streamlined to around 120 staff in offices in Australia, Hong Kong, London and Dubai, Tibra remains a leading player in the international derivatives trading market and is one of the most successful companies to have been built by a UOW alumnus. Although Tibra’s headquarters are located in Sydney, it still retains its founding office in Austinmer.

A mathematics and finance graduate, Tim also developed Tibra’s trading strategies and systems. He is deeply passionate about the crucial importance of mathematical skills and has been instrumental in enhancing and promoting the offerings of UOW’s School of Mathematics and Applied Statistics. He has served on the school’s advisory committee and significantly influenced the design and development of teaching and learning programs, in particular the Master of Financial Mathematics and the undergraduate Quantitative and Computational Trading major.

Though Tim retired from operational work in 2016, his contribution has not waned. He sits on the boards of Tibra Capital and the Tibra Capital Foundation, through which the company has given more than $5 million to deserving charitable causes, and also the Illawarra Health and Medical Research Institute. He remains active in local business networks, including the Wollongong CEO Network of which he is a co-founder. Tim has also been a strong supporter of and investor in UOW’s iAccelerate initiative from its inception, and is an indefatigable force in cultivating our region’s entrepreneurial ecosystem.

Chancellor, Tim Berry has maintained a genuine connection with UOW and commits a great deal of his time, energy and resources to advance our educational leadership in mathematics. Beyond this, his contribution to the entrepreneurial evolution of the Illawarra is vast and enduring.

Chancellor, it is a privilege and a pleasure to present Timothy Berry for admission as a Fellow of the University of Wollongong.