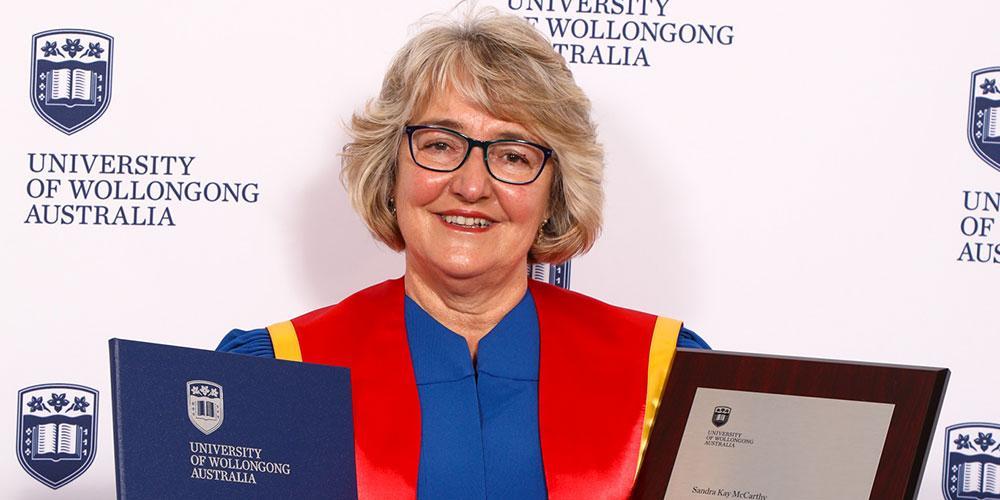 Fellow of University of Wollongong

Sandra served as Mayor of Kiama Municipal Council (KMC) between 2000 and 2012, following a five-year term as Deputy Mayor. Combining vast expertise in community planning, governance and partnership-building, she leveraged her position to drive substantial improvements in community health planning. In particular, she was policy leader and principal contributor to the innovative KMC Health Plan (2000-2017), a long-term collaborative framework for developing a healthy, sustainable and vibrant community. The acclaimed program earned World Health Organization (WHO) recognition and provided an inspirational example to other regions.

The Kiama Town Centre Charrette Urban Design Master Plan, the NBN Pilot Program in Kiama and the KMC Biodiversity Policy – a first of its kind in Australian local government – are among Sandra’s many other achievements as Mayor. She also offered regional leadership as Chair of the Southern Councils Group, guiding councils across the Bega Valley, Kiama, Shellharbour, Shoalhaven, Wingecarribee and Wollongong to collaboratively promote and foster sustainable development and build on the region’s unique economic, natural and cultural heritage.

Sandra remains Kiama’s longest serving Mayor, bestowed the honorary title of Emeritus Mayor in 2012 in recognition of her enormous contribution and impact. She was also named NSW Local Government Kiama Woman of the Year in 2012.

Though Kiama and its residents have benefited greatly from Sandra’s dedication, her impact extends far beyond the region. As Chair of the Australian Chapter of the WHO Alliance for Healthy Cities (AFHC) – an international network charged with protecting and enhancing city-dwellers’ health – she successfully merged the policy efforts of local government and communities and mentored and advised cities globally in best practice health planning. She led numerous flagship projects including Healthy Food for Sustainable Communities: Building Partnership, a joint initiative between KMC and the University of New South Wales Healthy Built Environments Program.

In 2012, Sandra was officially recognised by the AFHC as a Leading Pioneer Expert for her work in helping create healthy cities around the world. She made history in 2016 when she was awarded the first ever individual membership of the AFCH at its global conference.

In 2014, she was one of just 30 high-performing rural women to receive a new scholarship offered by the Australian Institute of Company Directors with the aim of lifting female representation on boards. She shares her expertise as a board member of Healthy Cities Illawarra, Community Options Illawarra and Blue Haven Aged Care Facility in Kiama.

Sandra is deeply engaged with the University and driven to strengthen its connections with community to improve public health. An Honorary Senior Fellow with the UOW Centre for Health Initiatives (CHI), she undertakes collaborative research in social marketing and dementia friendly initiatives. She has tutored and presented guest lectures at UOW for Public Health, Social Sciences, The Sydney Business School at the University of Wollongong and CHI, and served as a member of the University of Wollongong Council from 1998 until 2001.

She holds a UOW Master of Public Health and Post Graduate Diploma in Educational Studies Administration, and is a BOSTES accredited teacher with more than 25 years teaching experience at secondary and adult education level. Sandra is a vocal advocate for the importance and benefits of lifelong learning, and is sought after as a speaker at conferences both in Australia and abroad.

Sandra was appointed Research Lead and Collaborations Officer at Grand Pacific Health, now Coordinare, in 2013, where she continues to shape regional health policy.

Chancellor, Sandra McCarthy has dedicated a distinguished public sector career to positively influencing community health outcomes by enhancing everyday quality of life and harnessing the power of strong communities and partnerships. Her outstanding commitment and efforts will continue to deliver significant and lasting global impact into the future.

It is a privilege to present Sandra McCarthy for admission as a Fellow of the University of Wollongong.