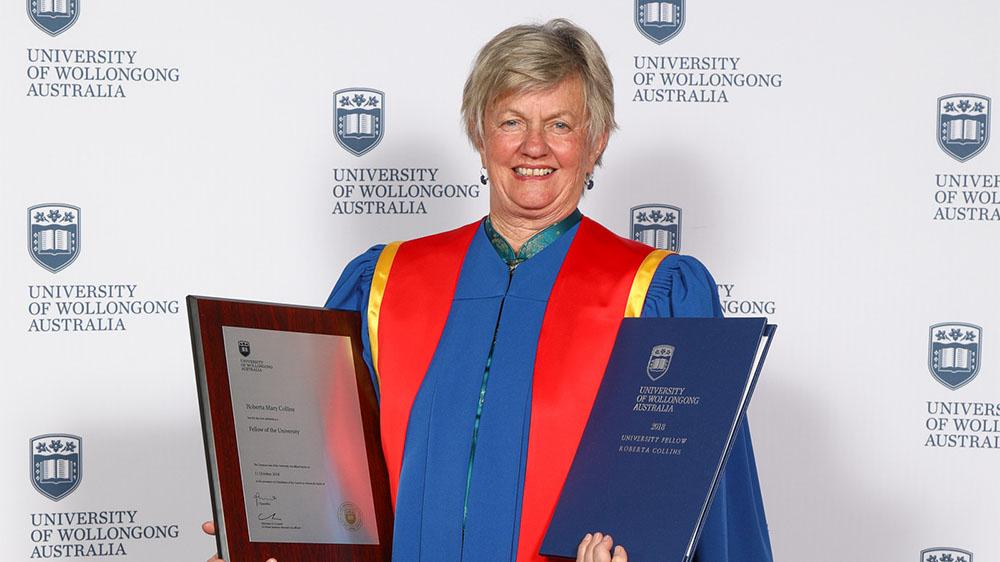 Chancellor, I present to you Robbie Collins.

At the University of Wollongong, Associate Professor Robbie Collins is synonymous with the Shoalhaven campus and with its outstanding success. As Head of UOW’s Shoalhaven campus from 2002 up until her retirement last year, Robbie has been indispensable in nurturing it from its beginnings a ‘remote’ or ‘satellite’ campus of the University into today’s vibrant regional partner. The campus proudly showcases UOW’s world-ranked teaching and learning expertise, and flourishes as a constantly evolving example of both Robbie’s and the University’s rich engagement with local community.

Before joining UOW’s academic staff in 1986, Robbie spent her early career as a high school teacher and careers educator in the NSW Department of Education, having graduated from UOW with her teaching degree in 1976. Her passion as an educator has shone through all of her work here at UOW. Despite the heavy demands of her role as Head, Robbie has been a ubiquitous and generous presence around the Shoalhaven campus, offering students advice at open days and careers expos, and one-on-one support throughout their degrees. Scores of students and now, alumni, who would otherwise have believed that university was not within their reach credit Robbie with having given them the confidence that they could succeed at tertiary study.

For someone who has been so deeply invested in the needs and dreams of others, there can perhaps be no more compelling sign of Robbie’s own success than these success stories, and there are many. They make up so much of the substance of the reputation at this university and within the wider community that Robbie has so thoroughly earned.

Born in Kalgoorlie, Western Australia, Robbie’s affinity for nurturing meaningful and trusting relationships with the community, and her drive to make regional and remote locations feel less so, was established early. In roles at UOW during her forty-five year career with us, variously as an undergraduate, then postgraduate student, alumni, tutor and leader, Robbie has connected with students and the broader community, working with both to advance the region. Duly, in 2013, Robbie was recognised by UOW with the Vice-Chancellor’s Award for Community Engagement. In concert with her leadership roles, Robbie has been active as an academic researcher, publishing influential journal papers on the possibilities and achievements of university–community collaboration.

She supported the establishment of a Shoalhaven Alumni Chapter, and was a driving force behind initiatives like the Koori school graduation ceremonies and Shoalhaven Careers Expo, which link local school students with the campus – many of whom will be the first-in-family to attend university. Robbie has also been involved in a variety of community activities that include the Jervis Bay SeeChange Festival, the Shoalhaven Professional Business Association, Disability Expo, equestrian coaching, Relay for Life, the National Football Championship, Noah’s Challenge, SKYDS young driver training, PCYC, and the Shoalhaven Education Fund.

Robbie’s focus on strengthening connections with community has been recognised externally through the Shoalhaven Business Association’s Stars of Shoalhaven Award for the Careers Expo in 2005, the PCYC’s Time for Kids Award in 2016, and a Shoalhaven International Women’s Day Award in 2013. In 2017, her community leadership was recognised when she was a keynote speaker at the Shoalhaven Women in Leadership conference. Attesting to the magnitude of her impact, Robbie’s outstanding work for UOW and the Shoalhaven was publicly recognised by both state and federal members of parliament upon announcement of her retirement.

Robbie has said that she wanted to “create real possibilities” for all who engage with the campus, and “wanted the community to come on[to] campus as much as possible”. As a creator of opportunities, Robbie is renowned for being tireless. A regional force under Robbie’s incomparable direction, the Shoalhaven campus has come into its own. There, Robbie has created a living legacy that she can be proud of; certainly, the University is.

It is a privilege and a pleasure to present Robbie Collins for admission as a Fellow of the University of Wollongong.