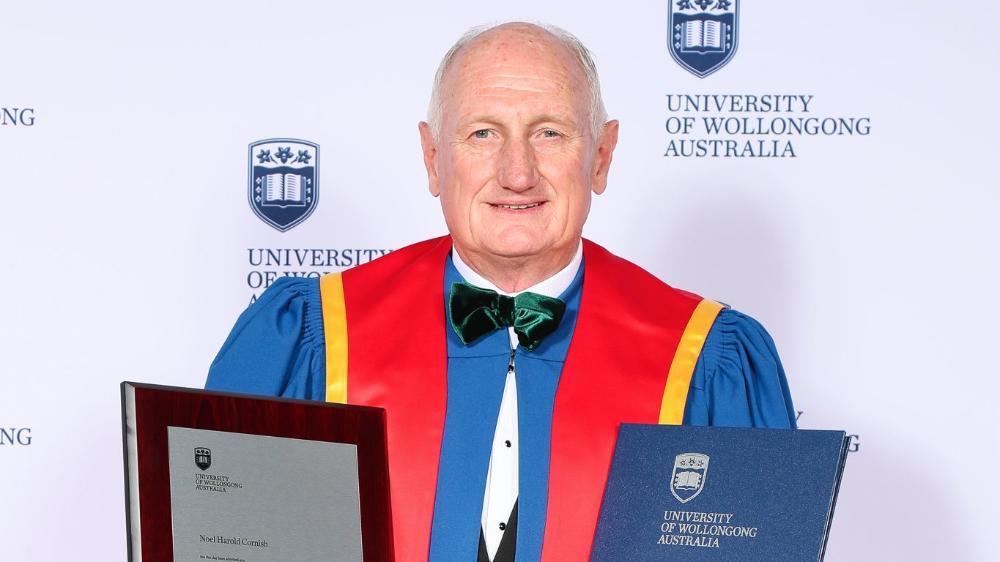 Chancellor, I present to you Noel Cornish AM.

Noel Cornish has demonstrated a lifetime of integrity, dedication and achievement in the service of regional development, workplace safety, higher education and community.

Since joining the University Council in 2006, Noel has brought unwavering dedication and exceptional wisdom, expertise and leadership to advancing UOW. His considerable influence can be seen in a diversity of areas, from business improvement, accountability, management efficiency and strategic review to a renewed focus on producing high-calibre graduates.

Noel served as the University’s Deputy Chancellor with great distinction from June 2015 until December 2017 and chaired both the UOW Finance and Resources Committee and the Accommodation Expansion Oversight Committee. He was also Chair if the Innovation Campus Health and Wellbeing Subcommittee and steered the University through until commercial close was reached with Lend Lease for that development.  Noel has served on other key University committees such as University Council Nominations, Risk, Audit and Compliance, and Innovation Campus Oversight. Through his diligence and high ethical standards, Noel has ensured compliance with governance frameworks that contributed to UOW being ranked among the world’s top two per cent of universities and named an employer of choice.

He has also served on the Board of Directors for UOW Enterprises since 2011, including as a member of their Audit and Risk Committee, the UOW Dubai External Advisory Council, and both the UOW College Hong Kong Board of Governors and College Council. Most recently, Noel has been the lead UOWGE Board Director for the acquisition of the KDU Colleges in Malaysia and continues as Chair of the UOW Malaysia Board.

Noel’s exceptional contribution extends far beyond our walls, particularly in the arena of economic development in the manufacturing and mining sectors. His distinguished 42-year career with BlueScope Steel started with a cadetship in 1969 and culminated in his role as Chief Executive of its Australian and New Zealand steel manufacturing businesses. He also variously served as President of NorthStar BHP Steel in Ohio in the United States, Group General Manager of South Australia’s Whyalla Steelworks, and Vice President of the Packaging Council of Australia.

Among Noel’s extensive achievements with BlueScope, his steadfast commitment to employee safety has been a defining feature. He led the creation of a continuous improvement culture in workplace health and safety that saw Port Kembla Steelworks achieve an international best-practice safety record of 14.9 million working hours without time lost to injury.

Driven by a core belief in social responsibility, Noel has provided genuine leadership and hands-on community involvement through long-term association with organisations such as Lifeline South Coast and the Salvation Army.

Although he retired in 2011, Noel remains an active contributor to regional and national economic development, serving as a Director of Snowy Hydro Limited, the Forestry Corporation of NSW and IMB Limited, and as National President of peak industry association Ai Group.

Chancellor, Noel Cornish’s service to the University of Wollongong and the Illawarra region is exemplary and the effects of his achievements are both widespread and enduring. Modest and unassuming, he has quietly but profoundly impacted the future of industry in our region and the lives of many.

Chancellor, it is a privilege and a pleasure to present Noel Cornish AM for admission as a Fellow of the University of Wollongong.