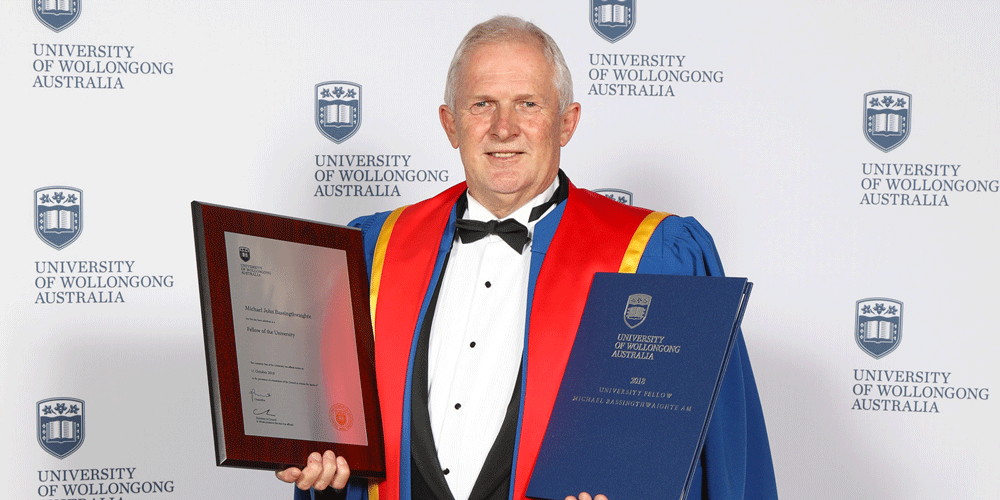 Chancellor, I present to you Michael Bassingthwaighte.

As the recently retired and much-loved CEO of Peoplecare, Michael Bassingthwaighte has made an indelible mark on regional health policy and the Illawarra business community. His career may have followed a vastly difference course, had Michael’s number come up in the last ballot for National Service. Luckily for the people of the Illawarra, and the general populace who have benefited from his outstanding contributions to the health insurance industry, a career in the military was not to be Michael’s destiny.

Born and raised in Crookwell, Michael’s parents greatly encouraged him in all his endeavours, instilling in him a strong work ethic, and it was perhaps his rural upbringing that led him to devote the bulk of his career to contributing to the improvement of regional health outcomes. Michael has held many director and leadership roles within the health insurance industry and has served as a health sector representative on the National Health Data Committee and also held a ministerial appointment with Australia’s private health insurance industry regulator body.

Known for his ethos of “work hard, play fair”, Michael spent thirty-six years fostering the unique organisational culture at the not-for-profit health fund, Peoplecare, embedding empathy and collaboration at the heart of its operations – qualities which have organically attracted large growth in its membership since his appointment as CEO in 1982. Under Michael’s leadership, Peoplecare has grown to become a national health fund that employs more than 175 full-time staff with 36,000 members.

As further testament to Michael’s outstanding leadership qualities, in 2008 he was voted Illawarra Business Person of the Year, and in 2009, Illawarra Boss of the Year. On the national stage, his “significant service to the private health insurance industry and the community of the Illawarra region” was recognised in 2013with the award of a Member of the Order of Australia.

Peoplecare was also voted Best Employer in Australia & New Zealand for staff engagement in 2017 and 2018. Michael is justifiably proud of this accomplishment which he lists a one of his major career achievements.

Michael’s generosity and community spirit led him however beyond the scope of his CEO role. Becoming involved with UOW on many levels, the University and its students have enjoyed the benefit of his expertise and experience for many years. As well as serving on the board of directors of the Illawarra Health and Medical Research Institute and also the Australian Health Services Research Institute, he also provided internship opportunities, funding and mentoring to The Sydney Business School at the University of Wollongong, and to Science, Medicine and Health research students through the Capital Markets Cooperative Research Centre. He shared his wealth of business and health service sector knowledge, guest lecturing for several UOW programs in joint initiatives with the Illawarra Business Chamber. He has also nurtured local entrepreneurial talent as the CEO of Youth Insearch, and mentors through affiliations such as the Junior Chamber Illawarra, the Regional Development Illawarra / Illawarra Connection Leadership program, and the UOW facilitated Pitch @ the Palace program. An inspiring and influential business leader, Michael was called upon to deliver the Occasional Address at the first graduation for UOW’s Shoalhaven Campus in 2011.

Michael is enjoying a very active retirement; his ongoing roles on numerous not-for-profit health boards, and his ongoing collaborations with UOW allow him to continue to help harness the collective talents of communities and partnerships to tackle regional health challenges.

Chancellor, it is a privilege and a pleasure to present Michael Bassingthwaighte for admission as a Fellow of the University of Wollongong.