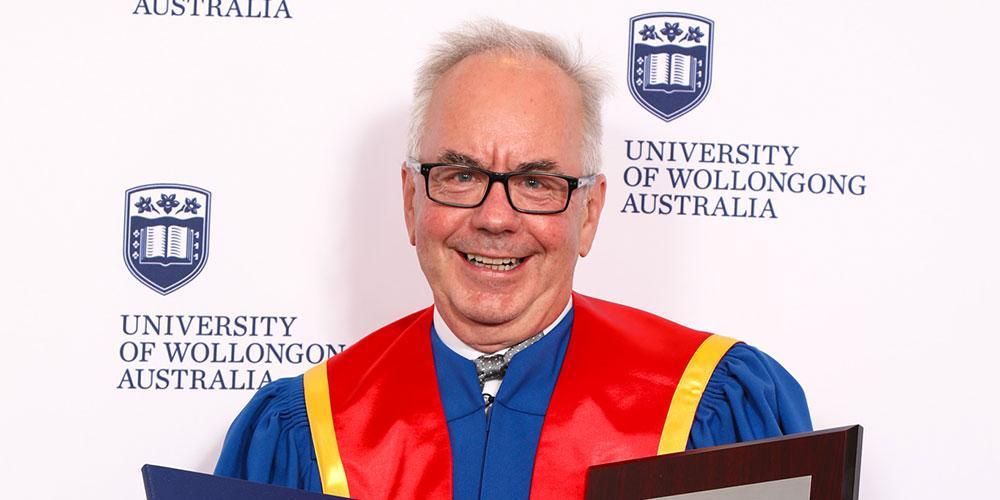 In a distinguished career at the forefront of education, Ian Brown has demonstrated a gift for innovation and leadership, and a depth of understanding and commitment to teacher education in Australia that has transformed the sector.

Prior to his retirement in January 2017, Ian’s contributions as an educator and academic spanned almost 40 years, and his sustained efforts to achieve his life goal of making education equitable for all have been exemplary. He has made a sustained and outstanding contribution to teacher education in Australia, and was instrumental in the UOW School of Education achieving Australia’s top ranking for teacher education in 2015 and 2016 in the QILT (Quality Indicators for Learning and Teaching) program. He has been an active and committed contributor to numerous UOW committees and working groups.

Ian has forged effective partnerships for the advancement of teacher education, particularly between UOW and the NSW Department of Education and public schools. He secured the University’s Professional Experience Agreement to ensure consistent quality of professional placements, and helped establish the inaugural Professional Experience Hub Schools at Woonona High School and Flinders Public School.

He has worked to shape education policy at state and national level, and led the establishment of the NSW Council of Deans of Education Initial Teacher Education Working Party to enhance program quality, develop policy and promote effective partnerships. He has served as Chair of the International Presence Committee for the International Visual Literacy Association (IVLA) and on the advisory and editorial boards of leading international publications, among numerous other avenues of service.

Ian is deeply committed to the internationalisation of education and student mobility. He developed key relationships for the University, particularly with Thailand, that have delivered hundreds of professional experiences and immersion activities for UOW students; as well as exchange programs and policy advocacy opportunities from which academic staff have benefited.

As a researcher, Ian has made an enduring contribution – particularly in the field of visual literacy, in which he is widely published and globally respected. Profoundly passionate about the arts and their place in the total education of children, he has led and contributed to many powerful visual literacy projects. His collaborative Voices of Children: Exploring Childhood and Culture through Visual Literacy initiative encouraged children from different cultures to explore their lives through image and text.

He has collaborated on projects to develop inspiring new models of education, including a $1.2 million national program to encourage greater high school student participation in maths and science. The research team drew on UOW’s expertise in a range of transdisciplinary areas – from sustainable housing to robotics, human health and nanotechnology – to develop innovative teaching and learning models and address the critical shortfall in the number of science and mathematics teachers.

A foundation member of the team responsible for the design of UOW’s $44 million Early Start initiative, Ian has been integral to its success. The most sophisticated initiative of its kind undertaken in Australia, Early Start combines community outreach, education and research with the aim of helping children flourish and realise their potential. He has also transformed UOW’s outreach through involvement in countless visual and performing arts education programs, both in and beyond the region.

Ian has received numerous awards in recognition of his impact, among them the Vice-Chancellor’s Award for Community Engagement and the Australian College of Educators Award for Outstanding Achievement in Education. He was also co-recipient of the International Visual Literary Association’s Braden & Beauchamp Visual Literacy Award in 2007.

Chancellor, Ian Brown is an outstanding scholar and an inspiring teacher and leader. His contribution to teacher education and the development of innovative education approaches to engage and stimulate children, students and teachers is exemplary, and he has worked to advance the education sector both nationally and globally.

It is a pleasure and a privilege to present Ian Brown for admission as a Fellow of the University of Wollongong.