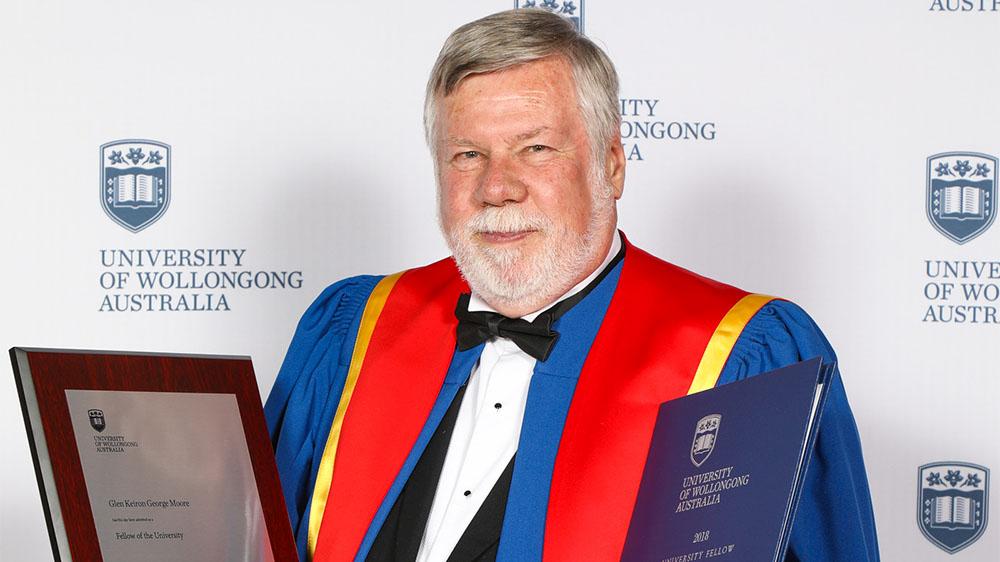 Chancellor, I present to you Glen Moore.

It is unlikely you could find a single person here tonight who is not familiar with Glen’s life work, for he is the founder and was, until 2014, the Director of the University of Wollongong’s Science Centre and Planetarium. Over a remarkable 48 year career spent at UOW, Glen has shared his vast love of the cosmos and has gifted the Illawarra region with one of the country’s most sophisticated and innovative science spaces.

After a stint as a physicist at BHP, Glen began as a ‘lone voice’ at UOW in the early 1970s as the first senior lecturer in physics and astronomy. So accessible and captivating was his lecturing style on subjects otherwise inordinately complex, that Glen drew great interest from students outside his faculty. Indeed, his teaching talents earnt him formal recognition through the award of the Australian College of Education Medal in 1991. With his teaching at UOW, TAFE and the local WEA college came the realisation that astronomy lent itself perfectly to practical demonstrations and exhibits, with the potential to foster a broader, popular understanding of our world and the galaxies beyond.

After a series of setbacks, Glen’s nearly two decades-old passion project to build a planetarium at UOW became a reality in 1989. Championing it in response to a public petition organised by Glen were Barry Jones, Minister for Science, and Paul Keating, the then-Treasurer, former UOW Vice-Chancellor, Ken McKinnon and former state MP Colin Markham. Modest in its origins, the first incarnation of the Science Centre was housed in a cluster of drab Nissan huts located in Fairy Meadow.

A product of Glen’s resourcefulness, the Science Centre’s first exhibits were mostly donations, mixed with ingeniously devised ‘string and sealing wax’ models of our solar system. Without the ability to support a paid staff, tours and admin were expertly led by the Planetarium Society (community volunteers and research students of UOW) and Glen’s wife, Elizabeth, with whom he insists he shares every bit of his success.

Following extensive damage caused by the devastating floods of 1998, Glen’s tireless advocacy saw a collective three million dollar commitment come from the NSW Government, industry and the community to rebuild it. It was re-opened in 2000 by the Nobel Laureate for Chemistry, Professor Alan McDermott of the University of Pennsylvania – a reflection of the standing of Glen’s achievements on a global scale. His tenacity rewarded, the Science Centre clocked the milestone of one million visitors in 2012. Recently relaunched as ‘Science Space’ it is the public face of the UOW Innovation Campus, where much of the university’s most exciting and novel research is undertaken.

Capturing the public imagination and fostering a love of learning in people of all ages has been Glen’s lifelong mission. In this pursuit, he is a long-standing Fellow of the Royal Astronomical Society, a foundation member of the CSIRO Public Education Committee, a Founder-Coordinator of the Illawarra Regional Science Hub in 2012, the Chair of Australian Astronomy and Space Exploration Liaison Group since 1986, and as of this year, a foundation member of International Planetarium Society Emerging Communities Committee. In 2013, Glen was also the recipient of the UOW Award for Community Service; in 2014, the City of Wollongong Recognition Award, and in 2016, an Australia Day Innovation Award.

With about one billion trillion observable stars in our galaxy, navigators look to a lodestar to guide them for it is one of the brightest stars in the sky and famous for its constancy, as the heavens pivot around it season to season and year to year. Glen, in his unstinting dedication to the realisation and continuation of his vision for the Science Centre has been, similarly, a guiding light; and his passion and inspirational devotion has ensured a legacy which is a gift to us all. To paraphrase the famous astronomer and scientist, Carl Sagan, “Every one of us is, in the cosmic perspective, precious”… and truly, “in a hundred billion galaxies, you will not find another” the like of him.

Chancellor, it is a privilege and a pleasure to present Glen Moore for admission as a Fellow of the University of Wollongong.