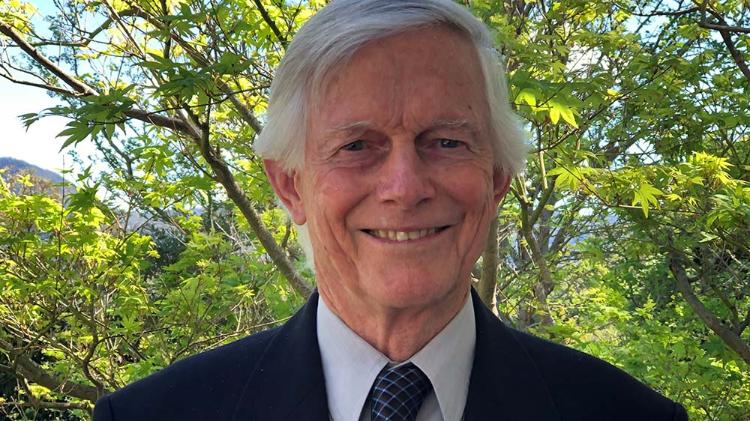 Citation delivered by Doctor David Williams AM, Chair of the Honorary Alumni Chapter at the University of Wollongong on the occassion of the admission of Brian Gordon Jones as a Fellow of the University on 7 October 2021.

Chancellor, I present to you Brian Gordon Jones.

In a distinguished career spanning almost five decades, Associate Professor Brian Jones has made an extraordinary contribution to teaching and learning, curriculum development, research and governance at UOW, and lent his expertise as a scientific advisor in coastal estuary management to the benefit of the Illawarra community.
Commencing in 1974, Brian witnessed the inauguration of the University of Wollongong in 1975 and for almost half a century has demonstrated ongoing personal and professional commitment to the development of our region.

Brian is an internationally respected leader in the fields of environmental geology, sedimentology and stratigraphy, sought out for his unique expertise in identifying fine-grained clastic sedimentary rocks. His research portfolio is diverse and prolific. Author of over 300 scientific articles published in international peer-reviewed journals and co-author of a book on Sustainable Water Resource Development Using Coastal Reservoirs, Brian has profoundly influenced our national and global understanding of the Earth and our place in it.

His research on sedimentary environments and geology, particularly in central Australia, the Sydney Basin and Illawarra coastline, has significantly advanced knowledge of water supply and quality and the sustaining of coastal and marine environments, informing crucial modelling of future environmental scenarios in our region and beyond. He is a founding member of the UOW Coastal Reservoir Research Centre, was instrumental in the development of the Lake Illawarra Coastal Management Program, and has played a decisive role in the Lake Illawarra Estuary Management Committee, the Wollongong City Council Beach Erosion Committee, the Consortium for Ocean Geosciences and more.

Passionately committed to nurturing excellence in research, Brian has directly supervised 52 PhD students, 18 Master of Science theses and research projects and 117 honours students to successful completion and assisted countless others. Many of these graduates now hold senior positions in industry and academia, their combined research output contributing substantially to the environmental health and management of our lands and waterways. He has also conducted numerous international postgraduate short courses on sedimentology, enriching student research and learning experiences, enhancing geological understanding in developing regions, and bolstering UOW’s global reputation as a world-leading institution.

Brian’s contribution to the governance and administration of Earth Sciences at UOW is immense. He has served as Head of the Department of Geology, Sub-Dean of the Faculty of Science and Director of GeoQuEST Research Centre, and was instrumental in establishing the former School of Geosciences.

Brian has continued to research and publish widely since his retirement in February 2019, including progressing a major publication on microfossils from the Lord Howe Island lagoon and shelf that will provide a baseline for evaluation and management of the World Heritage area. He remains an Associate Investigator in the Centre of Excellence for Australian Biodiversity and Heritage, Associate Editor of the Australian Journal of Earth Sciences, and continues to supervise and mentor higher degree research students.
Chancellor, through his exemplary contribution to teaching and learning, curriculum development, and research and governance, Brian Jones has profoundly and positively influenced not only our students and the University’s reputation, but the future of our region and the planet.

It is a privilege to present Brian Gordon Jones to be admitted as a Fellow of the University of Wollongong.