COALA (Characterizing Organics and Aerosol Loading over Australia) is a broad project designed to study the emissions and atmospheric chemistry of Australian biogenic species in pristine conditions and as they interact with anthropogenic pollution. Recent technological developments now make it possible to study in unprecedented detail the reactive carbon budget for isoprene, monoterpenes and sesquiterpenes, including quantifying emissions, transformations and deposition. These new developments will allow us to address specific questions related to a major uncertainty associated with climate forcing: knowing how emissions were processed in a pristine environment representative of pre-industrial conditions. The isolated urban areas of Australia, located close to pristine forests, will also allow us to quantify the impact of isoprene, monoterpenes and sesquiterpenes on urban air quality, and to address questions associated with the emerging science of lower NOx regimes in the mature industrialized world of the Northern Hemisphere. COALA is an international collaboration bringing together resources and facilities from multiple organizations and funding sources. 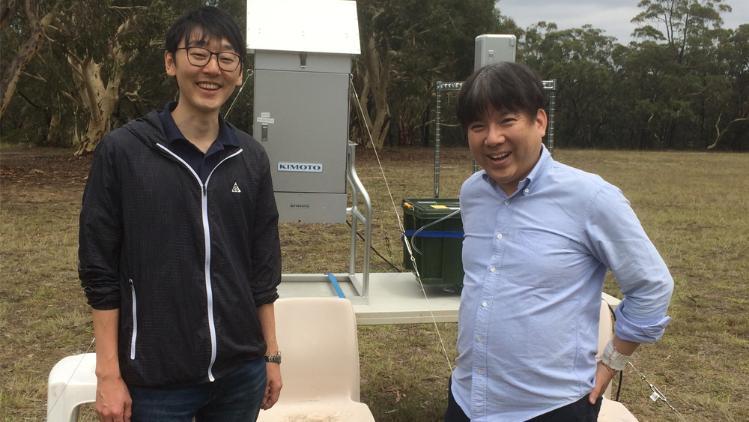 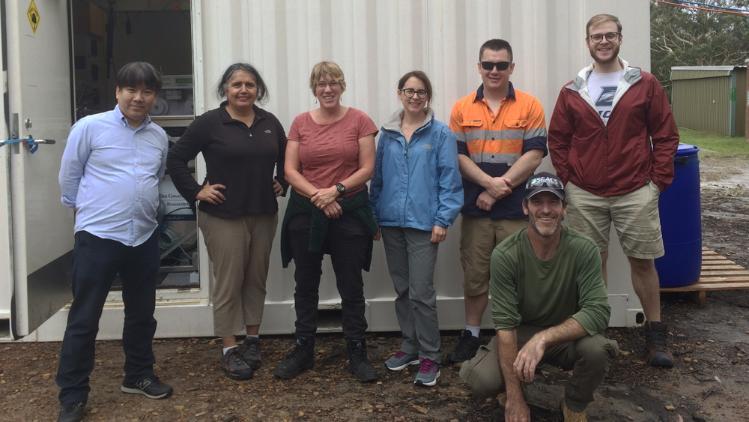 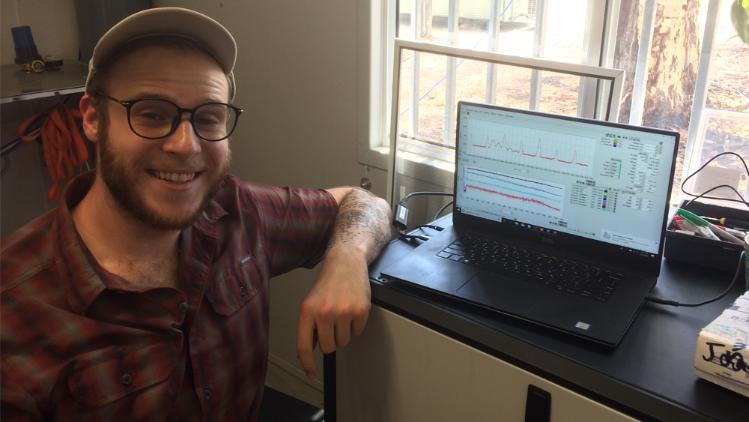 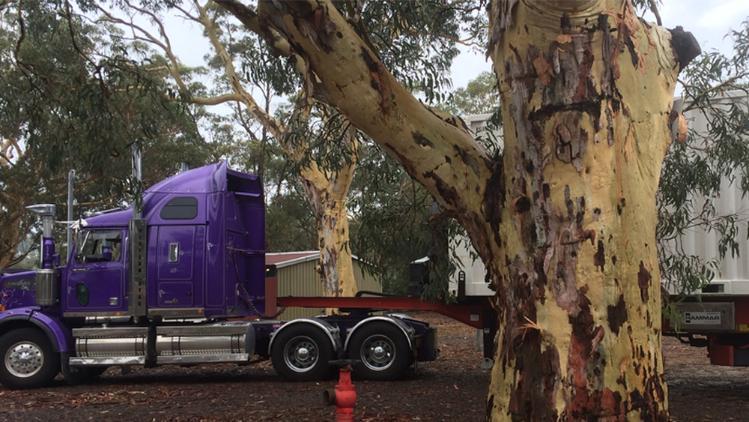 Today AIRBOX arrived at Cataract and was powered up successfully. Travis has started to get the handrails on the roof. Spectronus is powered up but we need to load up with desiccant before we start measuring. Michi and Sho have installed the high vol and low vol samplers in the open clearing in site 10 and the mast has gone up behind the first office with the sonic on top but not yet powered up.

Two mobile offices have arrived – one is powered up and set up as a basic office, the other one needs an extension cord to be powered as we have set it up right next to the large scribbly gum all ready for the PTR-MS-TOF’s arrival. Jhonathan and Jack have removed the flyscreen so we can access the branches and bring the ends into the office if that might make a nice experiment for emissions with the PTR-TOF-MS.

Talking of which, the PTR-TOF-MS has escaped the Manilla volcano, but the hold-up means that it has missed its customs slot and we may not get it here until Tuesday next week.

All the other instruments have been moved from Wollongong to Cataract and are ready for installation in the next day or two.

Despite the good fall of rain earlier in the day we have had almost none since 9am.

It is nearly a full week since the AIRBOX arrived at Cataract.

Tomorrow is predicted to be very hot and we have only a very small team on site that won’t include me – (I won’t know what to do with myself!).

Still to do are various checks and calibrations of the PTR-MS-TOF and getting the VOC sequencer together and running.

Today marks the end of the 4th week of COALA-JOEYS and it has been quite an exciting time for all involved!

We only just have another month or so until the planned end of the campaign but we are still unsure where AIRBOX will go next. Since the first 3-4 weeks of the campaign were smoke impacted, I am already contemplating whether we might look to extend a fraction of the measurements to the end of March.

So we are into the final stretch of the COALA-JOEYS campaign and I am overdue to send another update.

Since I last sent news we have had struggles to get the PRT working well but it now seems to be behaving itself (mostly).

We have started coincident tube measurements (using Alex’s tubes) with the PTR-MS-TOF and sequencer in line so that we can get a handle on the monoterpene speciation. This is running now and has included a very hot day today – so should be plenty to see J.

We still have quite a few experiments to run:

Pack-up for the AIRBOX is planned now to take place on 17th /18th March with last day of ambient measurements being 16th March. We would like to continue PTR measurements (to do things like the Scribbly Gum experiment) until the end of March.

Today marks the original planned date for the end of the COALA-JOEYS campaign and this morning we have begun switching off instruments in AIRBOX.

The ambient measurements are therefore completed but we have a few extra remaining experiments that we are hoping to complete before packing up the PTRMS and tree enclosure and soil sampling work.

We have some good weather forecast Wednesday (mostly sunny Min 12C Max 26 C), Thursday (Sunny Min 13 Max 30), and Friday (Sunny, Min 14 Max 33) and we are hoping to complete the last of the repeat enclosure experiments and the final soil sampling diurnal runs (on Wednesday and Thursday).

On Friday we plan to run the last of the 5 way intercomparison ambient VOC tube measurements and a repeat of the coincident VOC tube sampling at multiple sites.

Assuming that we achieve all of this, then all that remains will be the intense experiment on the Scribbly Gum tree and the final calibrations and inlet tests for the PTRMS inlet.

So today the 3 of us remaining standing finalised the pack-up at Cataract to spell the end of the COALA-JOEYS campaign.

Before I go into some actual news, I would like to extend an invite to all involved in the campaign (or even just interested) to join in a virtual end of campaign party (since sadly a real one is off-limits). I will try to sort some possible times that might work for a beer/coffee and send an invite later.

This last week we have been frantically trying to finish up before the expected lock-down occurs here. We had some great weather that, along with some very long days, helped us achieve all the remaining experiments that I outlined last week.

Today the PTR packing was finalised and it is awaiting pick-up at the distribution centre at the University of Wollongong. AIRBOX is powered down, packed and strapped down also awaiting pick-up (when we know where it’s going next!). The DPIE air quality station is similarly packed and ready for transportation. Malcolm fetch all the University of Sydney gear yesterday and all the UOW gear is back at the lab (some major clear up will be needed when we next can spend serious time there). Sho packed up the Nagoya gear last week.

Meanwhile all the VOC tube samples have gone to their respective groups – Alex has confirmed that his arrived safely in California – not sure if Kirsti’s have reached Lancaster yet. Malcolm has run his already, but ANSTO has shutdown and so we are not yet able to run ours.

So it has been a truly amazing few weeks!

Whilst the world as we know it has been transformed around us, the campaign at Cataract has included:

On top of the COVID19 challenges, we have had problems caused by bushfires, volcanoes and drought …….(and poor plumbing!!).

We have experienced smoke, huge rainfalls and then a fairly typical end of summer, beginning of spring as far as weather is concerned. We have seen some significant new particle formation events and some interesting behaviour with the biogenic VOCs – lots of isoprene and surprisingly little amounts of monoterpenes.

I think we will have some very interesting science out of this all and I thank you all for your contributions and look forward to working together to understand the results.