How a love of the outdoors inspired David Griffith's illustrious career

Emeritus Professor David Griffith has always found his solace in the great outdoors.

An avid bushwalker, cyclist, hiker, and explorer, Professor Griffith says that even now, his favourite place to be is in nature.

So, it makes sense that his long, eminent career has been devoted to the composition of the planets’ atmosphere.

Professor Griffith is an atmospheric chemist and founded the Centre for Atmospheric Chemistry at the University of Wollongong. He joined the University in 1986, and for the past 35 years, has made an immense and unparalleled contribution to atmospheric science and spectroscopy, particularly in its application to a sustainable world.

This week (Wednesday 28 April), Professor Griffith was recognised with an Emeritus Professorship, for his outstanding service to UOW, his vast research output, and his generous leadership of emerging researchers and students.

Professor Griffith, who retired from UOW at the end of 2020, says it was an unexpected delight to be honoured.

“UOW has been a good home to me for 35 years,” he says, “I have grown my academic ‘family’ of students and colleagues here, so I am pleased and gratified to receive the honour of an Emeritus Professorship.”

UOW was not Professor Griffith’s introduction to the academic world. Describing himself as a “public school kid” who did not come from a scientific family, he did well at school and discovered a fascination with and passion for chemistry and physics.

“I had really good teachers. I wasn’t really looking ahead but I did science and chemistry was the stream that really interested me the most,” he says. “I had a natural ability, chemistry really suited my strengths.

“You make your way forward in chemistry and physics through understanding, argument, deduction, proof, more than by remembering facts.”

He is not as passionate about all sciences, he is quick to point out, describing biology as “incomprehensibly complex to me”, with a laugh.

After leaving school, Professor Griffith studied physical chemistry at Monash University, where he completed his undergraduate and PhD. The highlight, however, was not the classes but the Monash Bushwalking Club, where he met many of the friends with whom he remains close to this day.

Following his graduation from Monash, Professor Griffith joined Australian National University for a few years before relocating to the United States as a Visiting Scientist at the National Center for Atmospheric Research in Boulder, Colorado.

It was here that he worked under Paul Crutzen, who won the Nobel Prize for Chemistry in 1995 for his research into the formation and decomposition of ozone in the atmosphere.

“I was part of Paul’s lab, measuring atmospheric gases, in Boulder. He gave me a lot of freedom, and when he moved to Germany to become director of the Max Planck Institute for Chemistry, he asked me to come along with him,” Professor Griffith says.

“Paul passed away earlier this year. He was an extraordinarily creative chemist and scientist, and I owe much of my start in atmospheric science to him.”

In 1980, Professor Griffith and his wife, Lyn, who had relocated with him to Boulder, prepared to move to West Germany, which was then emerging from the geopolitical conflicts of the Cold War.

The couple were excited about a new chapter in Germany and had begun to learn the language in preparation for their move. Yet, the young couple were torn apart by tragedy, when Lyn was killed by an avalanche while climbing Dhaulagiri mountain in the Himalayas.

“I met Lyn in the Monash bushwalking club,” Professor Griffith says. “We were excited about living in a different culture in Germany. It was a fantastic academic opportunity, but I lost my wife in the first week I was there. I thought, am I going to chuck this in and go home or stay in Germany? Having work to focus on allowed me to keep going.”

It was an interesting time to be in Germany, as Professor Griffith watched the country shift from the deep divisions of East and West into the eventual thawing of relations that would come to signal the end of the Cold War.

Yet he never intended to stay forever. In 1986, Professor Griffith, along with his new wife, Renate, decided to relocate back to Australia.

Now a fluent German speaker, Professor Griffith treasures his time in Europe and says it was one of the most influential experiences of his life.

“It was a fascinating time, watching Germany change. I still get a great deal of satisfaction about the fact that I can go back to Europe, feel at home and speak another language,” he says. 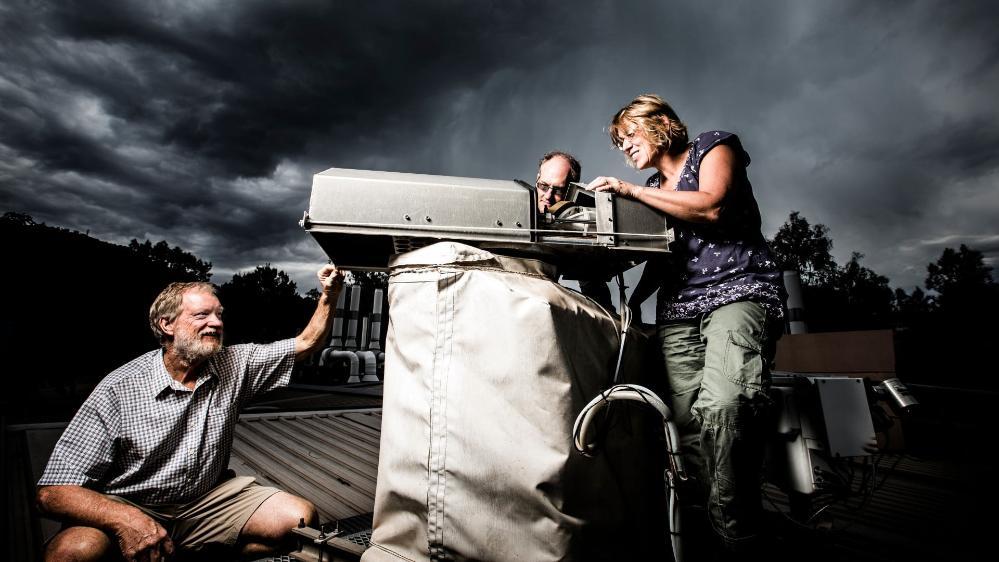 Professor Griffith says when he came to UOW in 1986, it was “a very dynamic place to be”.

Much of his research in the early years was focused on the detection and analysis of trace gas in the atmosphere. He was instrumental in driving the formation of the Centre for Atmospheric Chemistry and in 1996, Professor Griffith established Wollongong as a certified site in the Network for Detection of Atmospheric Composition Change, installing a high-resolution FT spectrometer and building a solar tracker.

For more than 25 years, the spectrometer has been providing an extremely valuable, continuous record of atmospheric composition above Wollongong.

Much of Professor Griffith’s research over the years has also focused on greenhouse gases and climate change.

He established the Total Carbon Column Observing Network foundation stations in Darwin and Wollongong, which measure greenhouse gases with unprecedented accuracy and precision.

Professor Griffith says the international reaction to the hole in the ozone layer was a heartening story for the scientific community.

“We understood that the driving gases for aerosol cans, air conditioning, and foam were dangerous for the ozone layer, so those dangerous gases were phased out.

“The industry came on board to stop making dangerous compounds, and came up with substitutes that weren’t ozone depleting.”

He is not so effusive, however, about the national and international reaction to climate change.

“For the last two decades, we have begun to understand global warming and climate change, but there has been a very different response. It is well-founded in science, there is no lack of consensus in the scientific community about what needs to be done to address climate change.

“The global implications of ignoring climate change are enormous, but it is a more difficult problem than ozone, and fossil fuel companies are making enormous amounts of money so they are going to fight to protect their business.”

Professor Griffith has always been driven by his love of science. Over his decades at UOW, he rose through the ranks but says he has always preferred being in the field over administration and management.

“I’ve never been power hungry. I’m not very diplomatic so those management roles weren’t very appealing to me,” he says with a laugh. “It was always scientific curiosity that drove me. I love being out in the field, measuring the methane emissions from cows, or the impact of bushfire smoke on the atmosphere.”

He has more than 250 publications, including papers in Nature and Science, and more than 8000 citations to his name. Professor Griffith has also been successful in translating his research into commercial opportunities, and collaborating across all sectors.

For now, though, Professor Griffith is enjoying retirement after stepping back from full-time work at the end of last year. He currently splits his time between Wollongong and Hobart, where his grandchildren live.

He still has an active outdoor life, retreating into nature whenever he can to bushwalk or cycle.

“I have always worked hard but I’ve always had an active external life too. I still have many friends from my days in the Monash Bushwalking Club, and I still love being outdoors and taking my children and now grandchildren on adventures when I can.”

Despite retirement, Professor Griffith remains a generous mentor to the emerging researchers in the Centre for Atmospheric Chemistry.

“The Centre has a 25-year record, and I’m the one who started it all. I’ve passed the baton on to the next generation now but I feel a responsibility to help keep it running. I’m happy to still be involved, so I help out when I can. I still love it.”