Celebrating a decade of SMART innovation

The future looks bright for the University of Wollongong’s SMART Infrastructure Facility, which celebrates its 10th anniversary this week.

With an estimated $250 billion to be spent on infrastructure in Australia over the next four years, the coming decade is likely to be even busier for SMART than its first 10 years has been.

It brings together experts in data analytics, economics, system engineering, operation research, transport, modelling and simulation, water and energy and other specialist areas.

SMART Infrastructure Facility Director Senior Professor Pascal Perez said that while the vision had remained constant, the application had changed with the times.

“We still have two pillars – data analytics and advanced modelling of infrastructure systems and services,” he said.

“Essentially, that means gathering data and then using that data to predict outcomes through modelling.

“The success of our vision is shown by the recent announcement of the Telstra-UOW Hub for AIOT Solutions, which will deliver innovative, cost-effective and fit-for-purpose AIOT (Artificial Intelligence of Things) solutions for communities, enterprises and governments.” 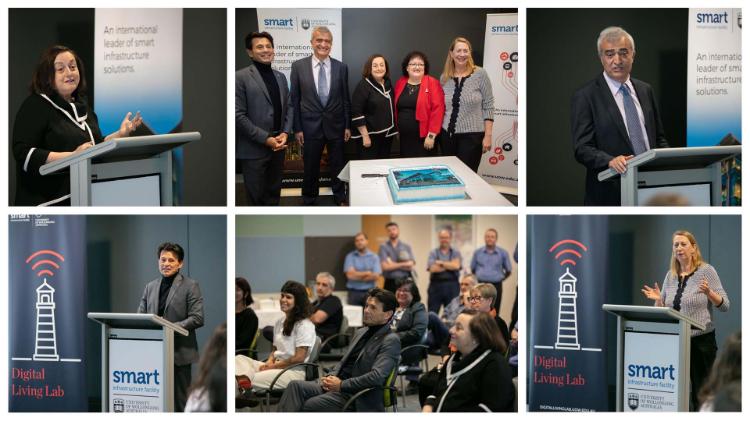 Phil Davies, chair of the SMART Infrastructure Facility Advisory Council said a key to the Facility’s success was the ability to find funding from a wide range of sources.

“Increasingly what I am seeing, is its ability to differentiate its research and get funding direct from government or industry,” he said.

“It’s been very much an applied learn – or translational research approach.

“It’s beyond being academic, it’s a real focus on delivering outcomes for the community.”

“It has successfully walked the fine line between keeping the research fresh and innovative, while at the same time, building on its strengths to offer competitive advantage to businesses, from start-ups through to state government corporations,” Professor Davidson said.

“SMART is a wonderful example of the energy to break new ground and create value where none existed before, that exists throughout the University.

“It will be fascinating to see what the next 10 years will bring. Happy anniversary.”