A report released today by Illawarra First calls for urgent action to address the doubling of commuter traffic and a massive increase of freight movements between the Illawarra and Sydney by 2041.

“I’m proud that the University’s SMART Infrastructure Facility has built a clear case for the development of this much-needed rail link to connect our region’s population to jobs, and importantly, bring those from all over Greater Sydney here for education, recreation and employment as well,” Professor Wellings said.

The report includes new research on the timing, costs and benefits of the proposed rail link, which would extend from Wollongong through to St Marys in Western Sydney.

The $3.2 billion dual freight and passenger line would be a 48-kilometre extension of the partially built Maldon-Dombarton line, and would connect the Illawarra region with Western Sydney Airport at Badgerys Creek, and a planned Western Sydney Freight Terminal at St Marys.

Project leader Senior Professor Pascal Perez said work on the first stage of the line was urgently needed before the existing rail link between Illawarra and Sydney, the South Coast Line, reaches capacity in 2036.

He said the benefits of building a dual-purpose, electrified rail line linking the Illawarra, Wollondilly and Sydney were too significant to ignore.

“There is an urgent need for work to start now on this link in order to increase local employment in the region, reduce commuting times and increase regional freight capacity to unlock the potential of Port Kembla,” Professor Perez said.

“We calculate that these improved rail and road connections would contribute to the creation of 17,500 extra jobs in our regions by 2041.” 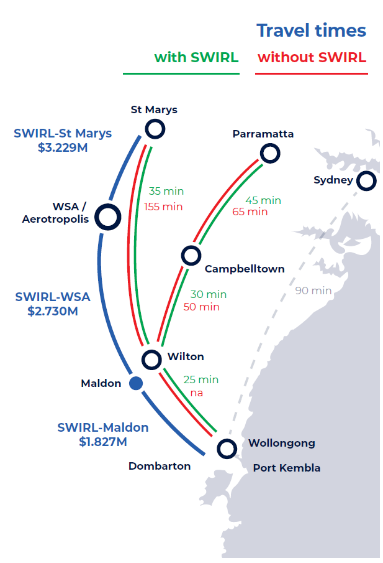 The report notes that the planned container terminal at Port Kembla would generate an extra 1.6 million road trips per year, and 9300 train paths by 2041.

“The report strongly supports the immediate start of planning for the first stage, from Maldon near Dapto to Dombarton near Picton, including a train station at Wilton and connection to the main rail line,” Professor Perez said.

“Considering the population growth and increasing freight demand, we recommend that planning and design work start immediately so the line is operational by 2036, when the South Coast Line is predicted to reach capacity.”

The report, published today, builds on a study completed in 2017, which found the SWIRL to be the most cost-effective rail project to overcome the peak rail congestion timeframe facing the Illawarra, which Transport for NSW believes to be coming as soon as 2036.

New year, new career That reverse mortgage scheme the government is about to re-announce, how does it work? Researchers call for study participants: How do workers in the Illawarra respond to industrial change?
Close