The University of Wollongong (UOW) is contributing to the creation of a vibrant cultural centre in the heart of South Western Sydney, with a large-scale public mural painted in Liverpool over the past two weeks.

Claire Foxton, UOW alumna and renowned artist, captured the strength and determination of Adi Holmes, who is currently studying a Bachelor of International Studies and Laws, majoring in Human Rights, at the South Western Sydney Campus.

The mural began on Thursday 28 February on the building facade at Bigge Street in Liverpool. It took Claire just over a week to complete.

Claire graduated from UOW in 2009 with a Bachelor of Creative Arts. She is a graphic designer, muralist, and artist who has painted more than 30 large-scale murals across Australia, bringing vibrant and engaging public art to local communities and cities.

The subject, Adi, a mother-of-two who moved to Australia from her native Fiji eight years ago, was inspired to become a human rights lawyer after her involvement as an activist in the Free West Papua Movement.

“I realised that if I really wanted to make a difference, I needed more background behind me,” she said. “That’s why I decided to study law, because I am so passionate but advocating for people’s rights alone wasn’t going to hold much weight without having a law degree.”

The mural comes two years after the University opened its South Western Sydney Campus. The artwork brings to life the sense of purpose of UOW’s student cohort and is a vibrant public mural for the community of Liverpool. 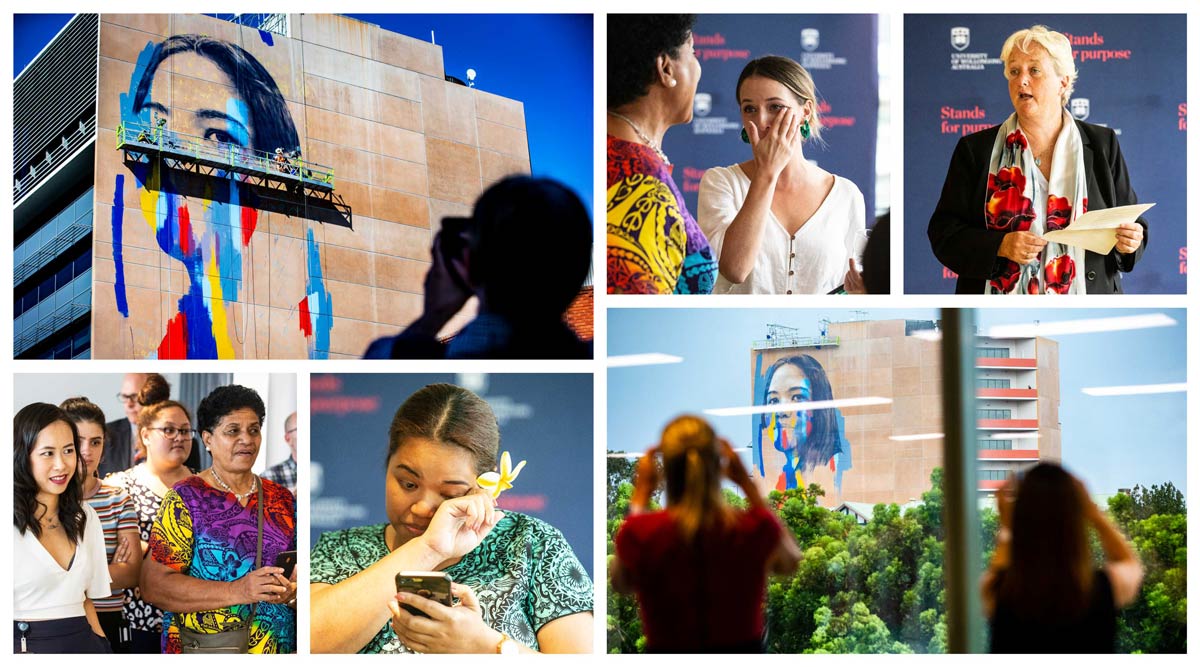 Professor Alison Jones, Deputy Vice-Chancellor (Health and Communities), said Adi was the perfect subject for the artwork, as she personified the values that UOW aimed to instil in its students.

“Adi is a testament to the power of education to change someone’s life,” Professor Jones said. “She is juggling all the responsibilities that come with work, study, and being a mother, but she is still determined to help others and contribute to her community. She is passionate, engaged, and devoted to making the world a better place for everyone. This is what it means to be a UOW student.

“To have that artwork created by Claire, an exceptional artist and graduate, in a community that we care deeply about, is a really proud moment for UOW.

“This vibrant mural will have an incredible positive impact on the city of Liverpool. It will be an artwork for the entire community to enjoy.”

The public mural comes on the back of UOW’s Wollongong Strong campaign, which encourages current and future UOW students to find their purpose and drive the social, cultural and environmental change they wish to see in the world.