Engineer stays on forefront of research throughout career

In his early 30s, University of Wollongong (UOW) PhD graduate Dr Philip Drain is establishing himself as a leader in the workplace.

Dr Drain works for mining and metals company South32, based in Western Australia.

“I’m happy my experience in industry and research has been recognised in my recent promotion to superintendent, leading a team of nine people,” he said.

“I’m getting used to that leadership position, widening my skill set and running bigger projects day-to-day.”

For most of his working life, Dr Drain has also been studying. 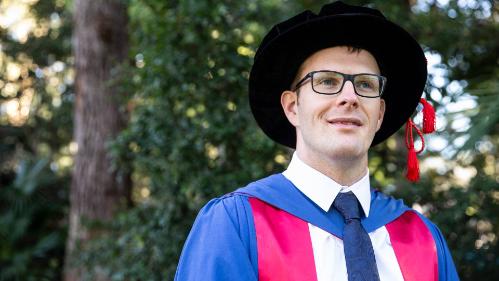 So, what has kept him at University?

For his Masters degree, it was a case of unfinished business. Dr Drain produced more results than he needed in his undergraduate degree, and extended this work into his masters to make a positive contribution to industry.

For his PhD, there were other factors at play. A major project he was working on in WA was wrapping up when he was offered a scholarship at UOW to research phosphorous removal during basic oxygen steelmaking.

“It was a project I was really interested in,” he said.

That girl later became his wife.

Dr Drain worked for BlueScope Steel one day a week during his PhD.

“I was able to apply what I was researching to online systems at work, saving them about $150,000 per year in raw materials consumption,” he said.

He believes that being at the coalface of research has positioned him ahead of the pack in ever-competitive mining and manufacturing sectors.

“It helps, in industry you have to think outside of the box to get a creative, efficient solution,” Dr Drain said.

“With lab skills, you can pick up a lot of problems that other people may not be able to find, and work on solutions.”

As South32 works towards being carbon neutral by 2050, he’s tasked with the rewarding job of helping to reduce their emissions effect.

“I’m looking after big furnaces and energy, there’s a lot of decarbonisation work coming, it’s an exciting space,” he said.