New rail link a game changer for the Illawarra and NSW

A freight and passenger rail link connecting the Illawarra and south-western Sydney would deliver economic benefits that vastly outweigh the costs, a new transport study has found.

The study, ‘Upgrading rail connectivity between Illawarra and Sydney’, commissioned by business advocacy group Illawarra First with research conducted by the University of Wollongong’s SMART Infrastructure Facility, recommended the construction of a new rail link referred to as the South West Illawarra Rail Link (SWIRL), connecting the region to south west Sydney.

The report examined a range of measures to improve speed and reliability of rail connectivity between the Illawarra and Sydney and identifies the importance and benefits of constructing the SWIRL and upgrading the South Coast Line. SWIRL would provide a critical passenger and freight service, creating a vital rail transport connection.

The report proposes an electrified dual-track line between Maldon (near Picton) and the South Coast Line (near Unanderra).

The two major bridges and the 4-kilometre tunnel near Dombarton would be single track.

“It’s time to start building the infrastructure required to accommodate the growing economy and population of the Illawarra.

“The economic impact of completing the SWIRL is estimated to deliver an additional $2.6 billion in Gross Regional Product.

"This is a conservative estimate and doesn’t factor in the enormous potential of linking the Illawarra region to Badgerys Creek airport.” 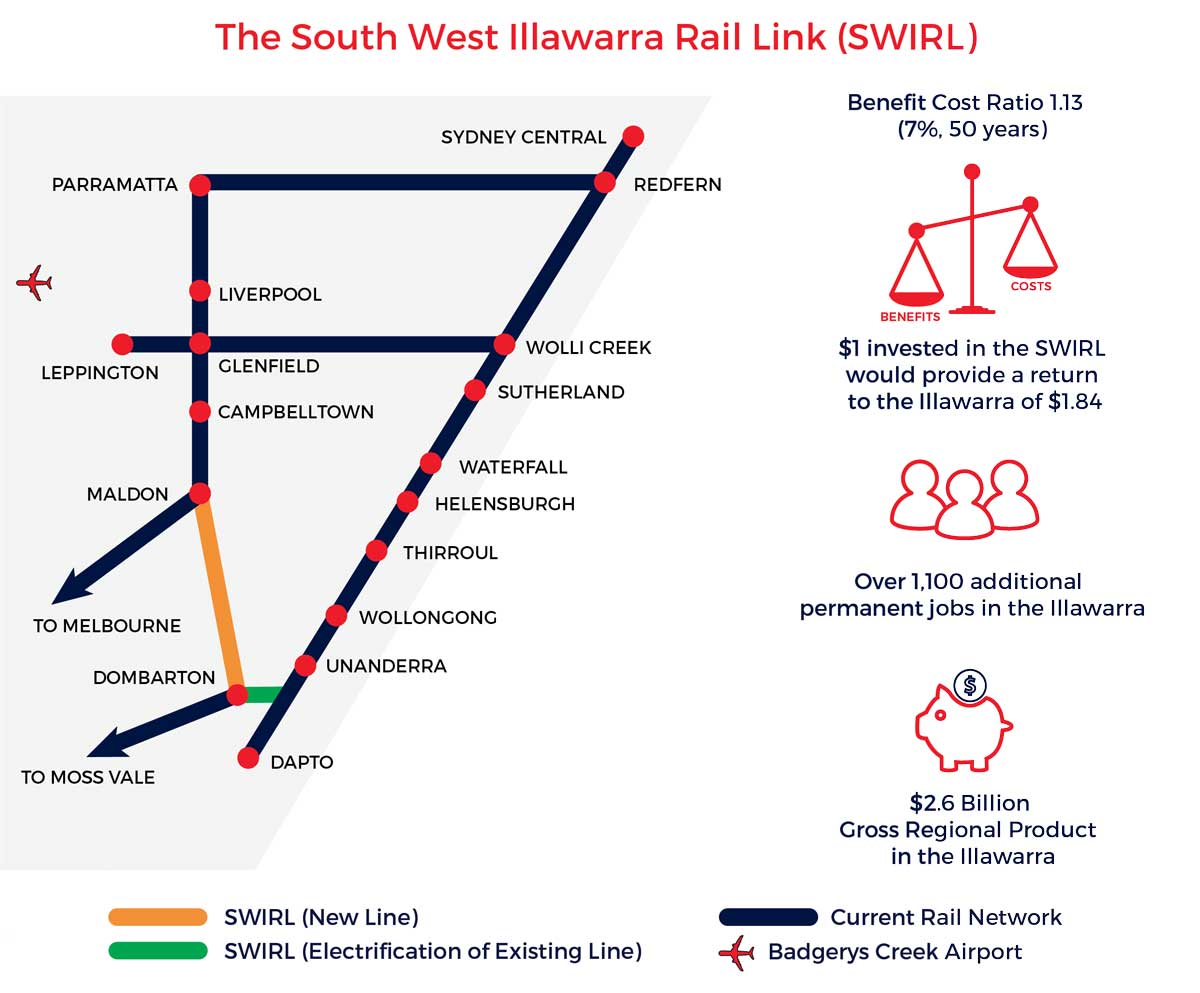 Summary of the key findings of the report, 'Upgrading rail connectivity between Illawarra and Sydney'.

“We need better rail infrastructure that can better service Wollongong, Port Kembla and the Shoalhaven.”

A key recommendation in the report is that the NSW Government submits an application to the Australian Government under the recently announced National Rail Program to develop a business case for the construction of the SWIRL and upgrades to the existing South Coast Line.

“The Australian Government in the $10 billion National Rail Program has identified Sydney to Wollongong as a strategic rail corridor and indicated it is interested in receiving proposals for improvements in rail services between cities and surrounding regional areas,” Mr Lamont said.

Some $20 million is available for the development of up to three business cases under the National Rail Program and we are recommending the NSW Government submit a proposal under this program to progress the construction of the SWIRL and upgrades to the South Coast Line.

“The ageing South Coast Line is an impediment to employment and productivity. Investment in improved rail connectivity is essential for the continued economic development of the Illawarra.”

SMART Chief Operating Officer Tania Brown said: “The value of the Facility is the way we can conduct experts-meets-industry research, which can play an important part in finding infrastructure solutions.

“We have multi-disciplinary teams that we can use on these research challenges.

“We are not just looking at it through an economic lens, we were able to run simulations on the capacity of the rail line, using some of our past experience on the local network.”