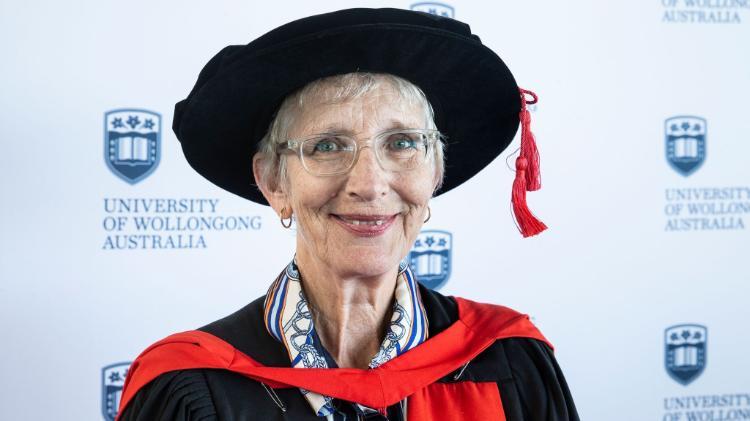 Citation delivered by Professor Glenn Salkeld Executive Dean, the Arts, Social Sciences and Humanities at the University of Wollongong on the occasion of the admission of Jennie Amanda Lawson as an Emeritus Professor of the University on 8 December 2020.

In a distinguished career as a visionary academic and leader, Amanda Lawson has helped shape the University’s future and position the creative arts as central to our national culture, values and identities.

Born and educated in Scotland, Amanda emigrated to Australia in 1982, furthering her earlier tertiary studies with a UOW Bachelor of Arts in Literature (Class I) and a PhD in Australian Literature from the University of Sydney. In her early career she excelled in several key arts sector appointments, including Executive Director of the Crafts Council of NSW, Program Manager at the Australian Council for the Arts, and Manager of Cultural Services and Art Gallery Director for the City of Bathurst.

Amanda’s exceptional leadership and strategic intelligence played a vital role in achieving a smooth transition, moving forward with revised governance and strategic planning frameworks and new professional staffing structures. Her tenure ushered in a culture of collegiality and excellence, notable growth in Higher Degree Research enrolments and Excellence in Research Australia (ERA) rankings, and the appointment of the first Indigenous lecturer to Creative Arts. Amanda also initiated a significant capital works project, which has culminated in a suite of state-of-the art creative industries teaching facilities and exhibition space within the newlylaunched Jillian Broadbent Building.

Alongside this extraordinary impact has been a major contribution as Director of the UOW Art Collection. Under her passionate directorship for well over a decade, the Collection has grown in both value and national significance. Amanda’s strategic acquisition program attracted diverse works from some of Australia’s most eminent artists as well as donations from generous private art collectors. Her drive to integrate the Collection into every aspect of the University’s physical presence has engendered an unprecedented level of accessibility and appreciation.

Stimulating broader engagement with the arts – not only within UOW but regionally, nationally and internationally – has been a hallmark of Amanda’s career.

She established a tri-faculty partnership between UOW and the Bundanon Trust, creating strong links for research, education and community engagement and enhancing the University’s reputation as a supporter and contributor to the arts and culture of the region and beyond.

Amanda has also influenced the national arts conversation through various critical advisory roles and government appointments, including as a Trustee of the Australian Museum and a member of the National Cultural Policy Group, the Australia Council’s Register of Peers, and numerous cultural industry boards and committees.

UOW’s international standing as a leading research-intensive university has significantly benefited from Amanda’s profound commitment to advancing research and research engagement. In recent years she served as Deputy Director and Chief Investigator of the Australian Research Council (ARC) Centre of Excellence for Australian Biodiversity and Heritage (CABAH), working to build Australia’s research capacity while connecting a global community through comprehensive outreach programs.

Deputy Chancellor, Amanda Lawson’s deep commitment to UOW and high-level contribution to the arts, research, learning and teaching, and governance make her a most worthy recipient of this honour.

It is a privilege to present Senior Professor Amanda Lawson to be admitted as an Emeritus Professor of the University of Wollongong.