Top honour for teaching student who gave back

Katana Murphy grew up in Orange, in the Central West of NSW, and was the youngest child of a single mother.

She started her schooling in a tiny, two-class primary school, before studying at Orange High School and later the nearby Blayney High, because it offered courses in chemistry, physics, biology and maths through the state’s virtual selective school, Aurora College.

She chose UOW – like many regional and rural students because it felt more manageable than Sydney and its attractive ocean lifestyle.

Although her mission is to share her passion for maths and science, she chose to enrol in a Bachelor of Primary Education because she wanted more variety in her teaching, and the close primary relationship with the young students.

Today, Katana was named one of the recipients of this year’s Robert Hope Memorial Prize. Her award illustrates both the power of individual achievement and the length to which the University of Wollongong (UOW) will support that.

The prize is UOW’s most prestigious honour for students and celebrates the life and contribution of the University’s founding Chancellor, Robert Hope.

It is awarded to a student who demonstrates exceptional academic performance, outstanding leadership, and a significant contribution to the University and wider community.

It would be fair to say that once Katana arrived at UOW, she threw herself in the life with gusto.

She started by volunteering at a tutoring program at Wollongong PCYC for primary and high school students who couldn't otherwise afford tutoring services.

And, as if this was not enough, she also volunteered for Learning Labs, an enrichment program run by UOW for high achieving school students.

After a positive experience in her first year, she joined another UOW program – Students as Partners in Mentoring - a program which has been collaboratively designed and developed by students for students to provide mentoring support throughout their studies in the School of Education.

“Basically, SAPIM provides support for first year students and answers the questions that they may not feel able to ask academic staff, because they may feel that it’s a bit daunting,” Katana said.

By her third year of study, she was the co-ordinator for the program and faced the significant challenge of moving the support online due to COVID-19.

“People were certainly struggling at that time, and it was a busy time for the program,” Katana said.

“For protection reasons, you couldn’t have one mentor alone with students, so you’d have to ensure that multiple mentors turned up, and then I would have two different laptops open and watch from the back end for both SAPIM and PCYC Tutoring. 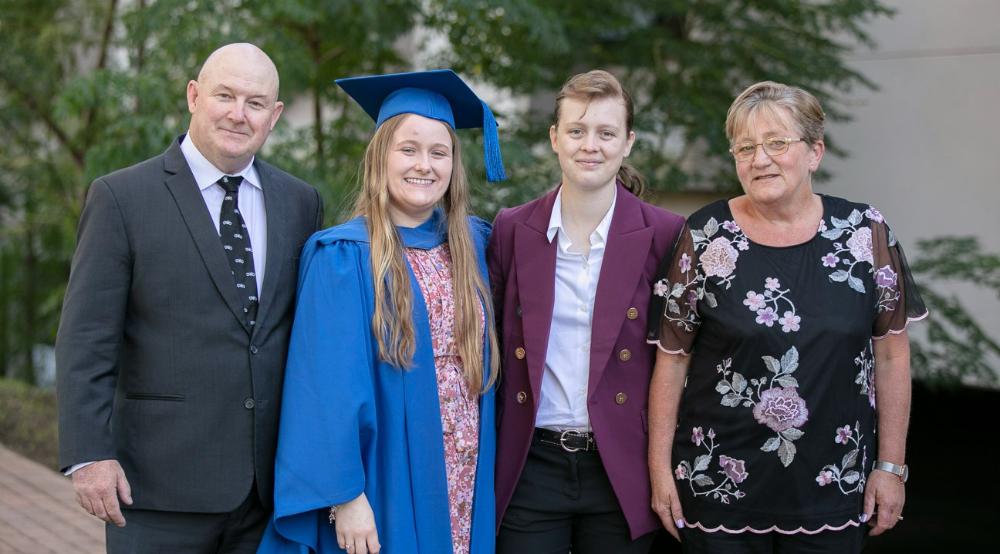 Katana Murphy, pictured with her family on graduation day.

At the height of her contribution, she was spending eight to ten hours a week volunteering, while completing her own studies with a Distinction average.

“I would like to push the idea of volunteering at uni,” she said.

“I really like helping people, but there’s more to it than that.

“When you’re studying, you can get super stressed and there’s so much to worry about with reading, lectures and hitting all those goals.

“For me, volunteering was time out from that.

“I was doing something that was meaningful for other people, but it also helped put things into perspective for me.

“It reminded me that the essay that’s due in on Monday is not the only thing that matters.”

She received significant help from UOW and she felt a debt that she wanted to repay.

“I think Wollongong is a really great place and it’s so welcoming,” she said.

“It was a place that made me want to give back to that community.”

Since she was offered Early Entry to the Bachelor of Primary Education – which she started in 2018 – Katana has accomplished many notable achievements.

Even before starting her studies, she was awarded the Susan and Isaac Wakil Foundation Scholarship through the Public Education Foundation, awarded for her contribution to her local community and determination to complete university while experiencing financial hardship.

Due to her academic and community achievements, she was featured in the Public Education Foundation’s 2020 annual report.

After her first year of study, she was awarded ‘Top Student’ and was listed on the Dean’s Merit List for the Faculty of Social Sciences in both 2018 and 2019.

While hard work, and her passion for teaching helped her achieve academically, support from her peers, scholarships and the university played a key role.

In 2018, she was awarded the Patterson Family Scholarship, due to her rural and financially disadvantaged background and dedication to her studies and teaching.

The following year, she was awarded the Hazel Holmwood Scholarship for Excellence in Leadership and Quality Teaching due to her commitment to making learning meaningful, and her view that all students should be supported equitably to achieve success.

She finished her studies with Distinction and a Weighted Average Mark of above 80.

Perhaps it’s no surprise that she found work immediately after graduation and has just finished her first term of teaching at a public school in Nowra. And the future?

“I definitely want to teach for a while, and to get a feeling for teaching – what works and what doesn’t,” she said.

But her time at UOW may not be over yet.

“There are so many fantastic tutors and lecturers – like Peter Andersen was for me - here who shape who we become,” she said.

“I wouldn’t mind going down that path and seeing if I can share my passion for teaching with other people.

“We constantly need new quality teachers because education impacts so widely in our community and our country.”