Commerce graduate shares his incredible journey from Eritrea to UOW

Teklemariam Mengistu had just one year and one week of high school education in Australia when he began studying for his Higher School Certificate.

He knew he was behind the eight ball regarding his schoolmates, having had to learn English, on top of trying to settle into a new country, but the young Eritrean student wasn’t going to let that stop him from achieving his big dreams.

“After the HSC results were mailed to my address, I realised I ended up with an ATAR of 40,” he said. “It was disappointing but not something I could control because I was learning English from scratch.”

English is Teklemariam’s third language and before he started schooling in Australia in 2013, he’d survived more than most in their lifetime.

His family had fled Eritrea for Sudan in the late 1990s seeking safety during the horrendous war between Eritrea and neighbouring country Ethiopia. From Sudan, Teklemariam and his family returned to their home country (Eritrea), just a month after he was born in Khartoum, only to flee Eritrea again – on foot ­– when the war resumed.

They applied for a humanitarian visa through the United Nations to come to Australia and were finally approved after more than 10 years.

Today (Tuesday 1 November), alongside his sister, brother, and grandfather, Teklemariam celebrated his graduation from the University of Wollongong (UOW), with a Bachelor of Commerce (Dean’s Scholar). But it was a long, and at times difficult, journey to finally make it to that stage.

“The first place I visited on the day of my arrival after Sydney was Wollongong and it is still my favourite place,” Teklemariam said.

After six months of intensive English training, Teklemariam enrolled in high school for one week of Year 9 before the Christmas break. But he was determined to honour all the people from his community who put faith in his ability to achieve his academic potential.

In his final year of high school, just before sitting his HSC exams, Teklemariam attended a UOW College information session. It was a decision that would change his life.

“The English as an Additional Language and Dialect (EALD) teachers at school encouraged me to consider enrolling into one of the College’s courses if I was unable to achieve my desired ATAR grade because [they knew] after arriving in Australia my main goal was to pursue a higher education degree” he said.

“The College had a pathway program into an undergraduate degree at the University of Wollongong which suited my ability and personal circumstances at the time.”

Teklemariam, pictured with his grandfather, sister, and brother on his graduation day at UOW.

Teklemariam said it was challenging to start a new educational program once again, but he was determined to make his dream turn into reality whilst making his family and Eritrean community proud.

“At first, it was challenging to learn in a new environment but there were other students in the same situation as myself,” he said.

“And the teachers at the College were extremely supportive during every step of my course.

“The skills I gained and the support from the teachers played a vital role in my higher education studies.”

And after successfully completing the tertiary preparation course within six months, Teklemariam was on the road to achieving his goal, starting his Bachelor of Business.

“By the second year of university I was much more confident than I was during my first year at UOW, and by the third and fourth year I achieved some of the highest marks from the entire cohort. I felt extremely honoured and proud to reach such milestones because most students within my cohort were born and raised here in Australia and English was their first language,” he said.

“The students were also more familiar with the Australian curriculum than me as most of them were recent high school graduates. Such achievements make me realise that dedication, hard work and consistency can enable anyone to achieve anything in life.

“I am a living proof that you can achieve everything that you dream of if you persevere through your challenges whilst being determined to succeed.

“UOW College had equipped me with the skills that made my dreams turn into a reality.”

Not only did Teklemariam achieve academic excellence, but he also graduated on the Dean’s Scholar program, reserved for the top five per cent of students in the faculty.

“I was on the list for multiple subjects for the year 2021, which was a challenging year to focus on my studies due to the disruptions and uncertainties caused by the global COVID-19 pandemic,” he said.

“Without going to UOW College I do not imagine I would be where I am now, not just with my grades but also the career I have been offered at UOW College.” 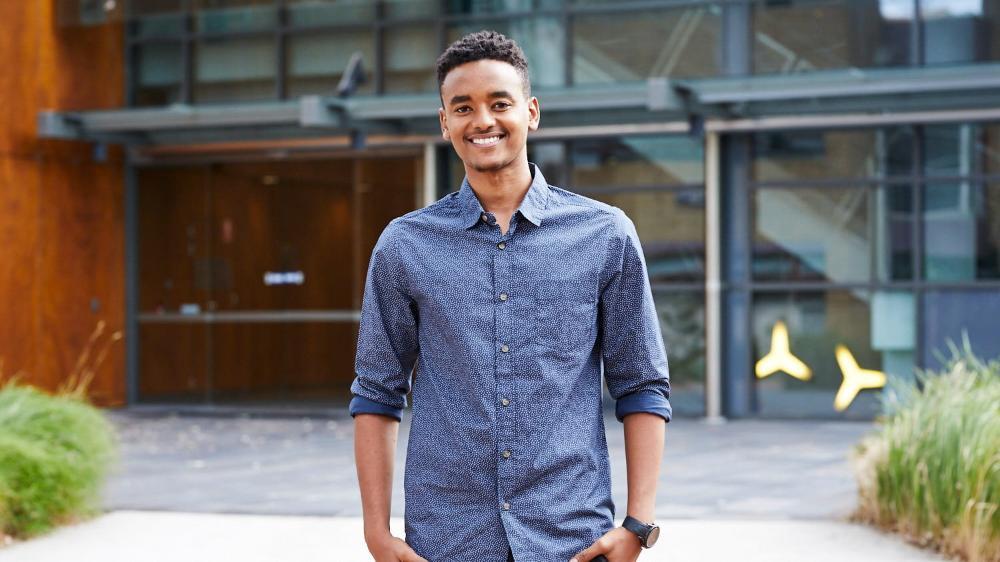 After graduating from the STEP program, Teklemariam was offered a position at the College during his second year of his undergraduate degree as a Peer Learning Program Marketing Co-ordinator. He also secured a position at the UOW’s campus at the Sydney Business School upon completion of his degree.

“My university degree is the biggest achievement I have ever had,” he said.  “But the motivation to achieve this dream partially stems from the perseverance embedded within my Eritrean identity.

“When I was in Sudan my family and the Eritrean community were supporting me with my studies, buying books and school clothes, so even though I was going through challenges, I tried to do my best and thrive through the difficult circumstances at the time.

“My educational experience at the College served as a bridge connecting the skills acquired within the STEP program with my undergraduate degree. It was the best decision and pathway which I have taken prior to commencing my degree.”

Teklemariam has been offered the opportunity to complete a Master’s degree but he aims to gain further career experience for now while mentoring and advising students who may find themselves in the same situation as he did at the end of Year 12.

“The skills I learned at UOW College will serve me for the rest of my life – in all aspects of life and to do the best that I can,” he said.

“I had many challenges throughout my studies but for me UOW College made my journey much easier than I could have ever imagined and has provided me with a much-needed boost of confidence.

“I encourage everyone to study in such a supportive, student-oriented and friendly environment that can help you achieve your educational and personal goals.

“I would like to dedicate my achievements to all the amazing teachers at UOW College and University of Wollongong, to my late parents who are taking care of me from above, to my Eritrean community both in Eritrea and globally in the diaspora, to my EALD teachers at Keira High School who believed in me when I had doubts in my abilities, and to all former, current and emerging refugees who have the potential to make the world a better place through education.”