Wattle Walk to highlight spirit of community after devastating bushfires

The wattle plant is one of the first to regenerate after the bush has been scorched by fire.

So, it seemed the ideal choice of native plant to commemorate the devastating bushfire season that tore through the NSW South Coast over the summer of 2019/2020.

The team from the University of Wollongong’s (UOW) Batemans Bay campus are creating a “Wattle Walk” to recognise the immense and ongoing impact that the Black Summer bushfires had on the coastal community of Batemans Bay and its surroundings.

The completed branches, comprising green stems and yellow pom poms, will form a landscape of knitted wattle that will be displayed in the grounds of the Eurobodalla Regional Botanic Garden. In addition, the art installation will be included as part of the River of Art, an annual festival that celebrates the vibrant arts scene of the Far South Coast.

“The purpose is to create a shared experience that symbolises our combined loss but also celebrates regrowth and healing,” Mrs Bath said.

“Wattles play a vital role in restoring ecosystems after fire, but the yellow colour is also symbolic of the yellow NSW Rural Fire Service uniform that is given to every brigade member when they pass their basic training.

“The golden wattle is native to south-eastern Australia, and when their seeds are exposed to heat, they germinate quickly, helping to stabilise soil and return nitrogen to the system.” 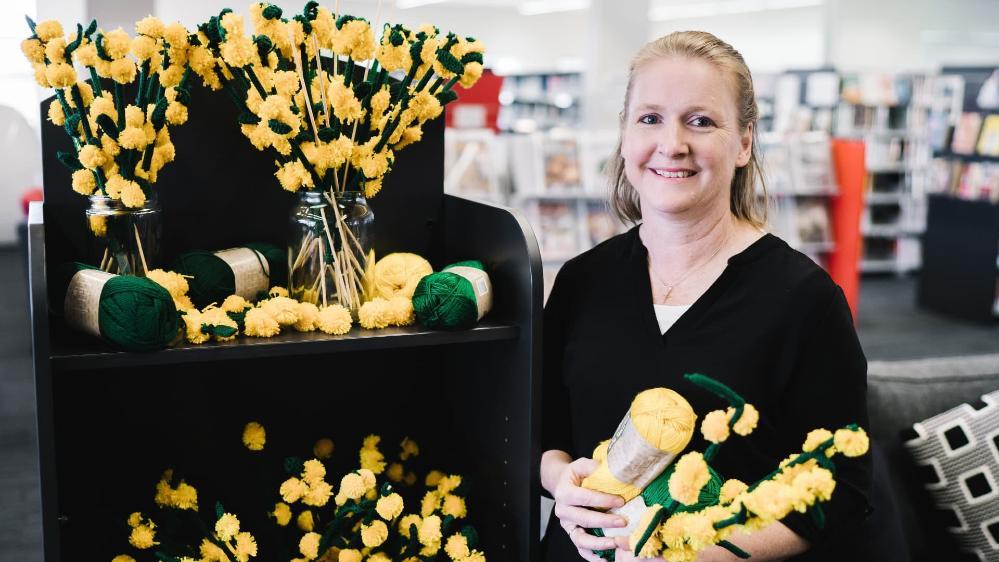 Nicola Bath, from UOW Batemans Bay, with knitted wattle flowers that have already been created for the community art installation. Photo: Sunbird Photography

It was a horrific time for the entire community, one that has left a permanent scar some 18 months later.

The UOW team have an ambitious goal to create an art installation of 37,000 wattle branches, one for every member of the Batemans Bay community.

“We were inspired by the Australian War Memorial’s 2018 display of 62,000 poppies, a tribute to the Australian lives lost in World War 1,” Ms Facchin said.

Knitting workshops are being run at the library, which adjoins the Batemans Bay Campus, but they are also encouraging community members who want to get involved in picking up wattle kits from the library and then drop them off when the branches are completed.

The Wattle Walk will be launched during the River of Art festival, which will run from September 17-26.

Ms Facchin said they are excited to see the community come together to create a memorable art installation.

Keen knitters can pick up a pattern and wattle kit at Narooma, Moruya or Batemans Bay libraries. Completed wattles, stem, leaves, and pom poms can be dropped off at the same locations.

There is also an instructional video available with a step-by-step guide to creating a wattle branch: https://www.youtube.com/watch?v=hvxss-TfnfQ&ab_channel=uownow