Five distinguished academics have been admitted as Emeritus Professors to the University of Wollongong (UOW) Honours List, recognising their immense contribution to their field of expertise and mentoring the next generation of researchers.

Professor Paul Wellings CBE, UOW Vice-Chancellor, said the five recipients were giants of their respective fields of research and had made an immeasurable contribution to UOW’s research, teaching, and community.

“It is an honour to be able to recognise and celebrate the work of Julie, Vera, Robin, David, and Wenche,” Professor Wellings said.

“They are all world-class scholars and leaders in their fields, but they are also generous teachers who have been valuable mentors to emerging researchers and students. I extend my congratulations to UOW’s newest Emeritus Professors.” 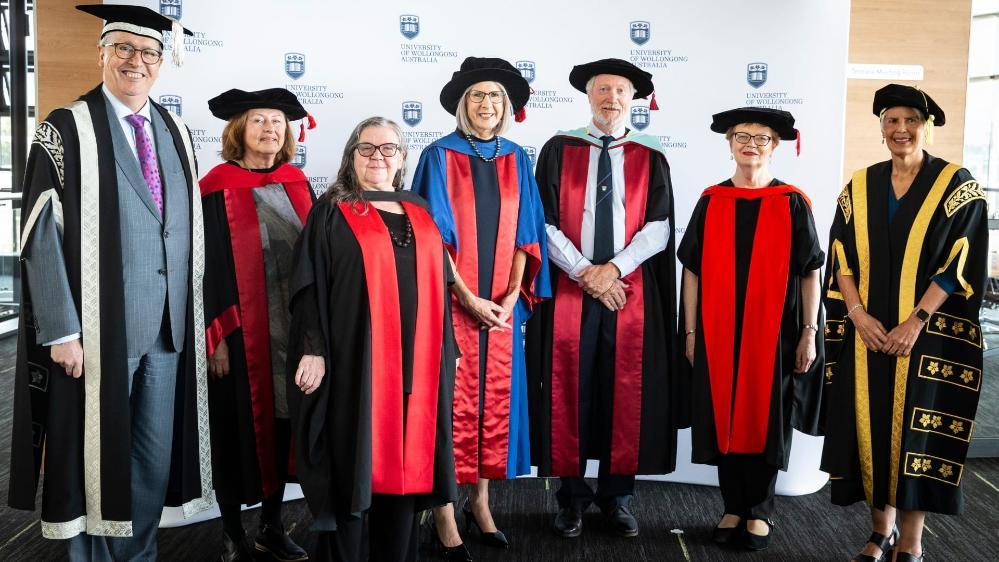 Senior Professor Julie Steele AM retired last year after 37 years at UOW. During that time, she became an internationally renowned researcher in biomechanics and founded the Biomechanics Research Laboratory at the University. Her research during her long and distinguished career has focused on improving quality of life and helping individuals prevent injuries.

Professor Robin Warner was the Deputy Director of the Australian National Centre for Ocean Resources and Security before retiring at the end of last year. She joined UOW in 2007 after an impressive career in the Australian Navy followed by the Attorney-General’s office, where she became a world-class leader in environmental law and the law of the sea.

Senior Professor Vera Mackie, the founder and Director of the Centre for Critical Human Rights Research at UOW, is one of the world’s foremost scholars in Asian history, gender, and sexuality studies. She retired from UOW at the end of last year, and was known during her time at UOW for her extensive publications of journals and books, and her generous mentorship of early career researchers.

Senior Professor David Griffith, who retired last year, is an outstanding scientist who has made significant contributions to the field of atmospheric chemistry. During more than three decades at UOW, Professor Griffith founded the Centre for Atmospheric Chemistry, working alongside academics at all stages of their careers.

Professor Wenche Ommundsen is a distinguished international researcher of multicultural and diasporic literature. She joined UOW in 2006, after a long career in Europe and Australia, before retiring in 2019. During her time at UOW, Professor Ommundsen became known as an outstanding academic leader and inspiring mentor to early career researchers and students.