Emeritus Professor a lifelong advocate for the arts

The concept of thriving, accessible creative cultures as a fundamental part of life has inspired Professor Amanda Lawson throughout her long and distinguished career as an art gallery curator, arts policy and enterprise specialist, and university academic and faculty dean.

Professor Lawson, who retired in April, was yesterday (Tuesday 8 December) awarded an Emeritus Professorship from the University of Wollongong in a ceremony at Innovation Campus.

“There are so many possibilities for cultural engagement and for experiencing the richness of arts and cultural heritage, as well as for creative expression. From early on I could see the potential of the arts to enrich everyone’s lives and offer diverse ways of looking at the world – from that I became committed to advocacy and support for the arts as a career.”

After completing a Bachelor of Arts (Merit) in English and Philosophy at the University of Edinburgh, Professor Lawson moved to Australia in the early 1980s. It was, she said, a positive time to come here.  “The time and the place were right to start my career. I arrived in Australia in a period of immense creative innovation and confidence.”

Professor Lawson had various roles in not-for-profit arts organisations, including Executive Director of the Crafts Council of NSW, and in arts funding and policy at the Australian Council for the Arts. She was the Director of Bathurst Regional Gallery and manager of Cultural Services for Bathurst City Council for a number of years.

“I decided to expand my background in art and cultural history and theory and undertook a PhD in Australian Literature at the University of Sydney, which was awarded in 2002,” Professor Lawson said.

Appointed Head of the School of Art and Design at UOW in 2004, Professor Lawson then became Dean of the Faculty of Creative Arts in 2008.  “UOW has been a unique place to work because of the way it values creative practice as a fundamental aspect of teaching and research. It is embedded in every part of the University, which was a vision created and achieved by extraordinary people who went before me… I just needed to take up the baton." 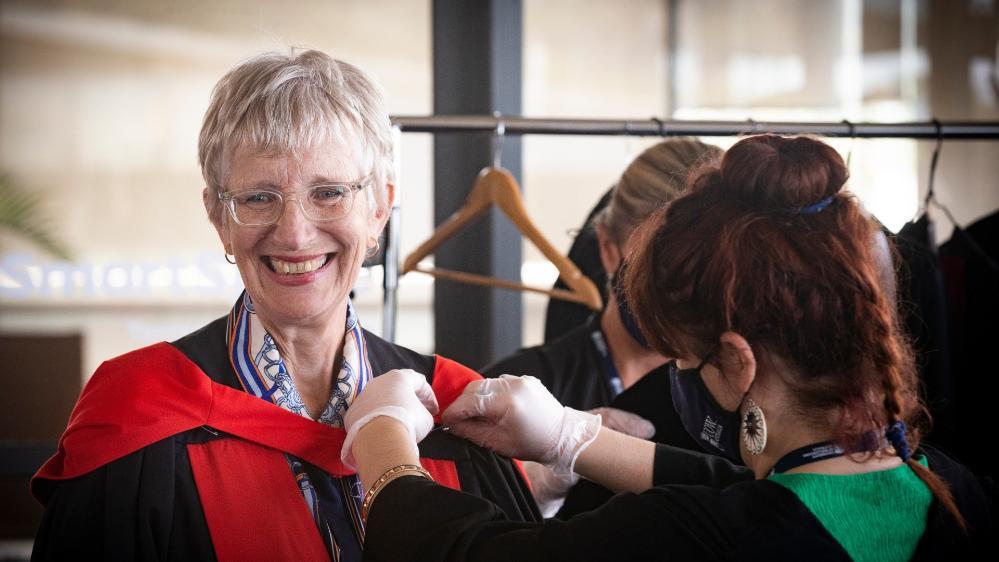 In 2013 Professor Lawson was appointed the inaugural Executive Dean of the Faculty of Law, Humanities and the Arts. “It was an honour to work alongside colleagues from such diverse areas, and to gain insights into the passions, the skills and the expertise that drive research and teaching in the humanities, communications and law. I found that we had much in common and that, as in creative arts, students and their futures are at the heart of these disciplines.”

With student careers in the growing creative industries in mind, Professor Lawson worked to secure the plans and funding for what has grown into a suite of excellent creative industries teaching facilities in the newly-opened Jillian Broadbent Building on UOW’s Wollongong Campus.

A few years after joining the University, Professor Lawson also took on the role of Director of the UOW Art Collection.  With a deep appreciation for Australian art, Professor Lawson has guided the collection to grow significantly in value and also to reflect the diversity of 20th and 21st century visual arts. The collection includes paintings, prints, ceramics, textiles and sculptures by eminent Australian artists such as Emily Kngwarreye, Lloyd Rees, Arthur Boyd and Judy Watson.

Under Professor Lawson, the UOW Art Collection has become integrated more broadly into the built environment at UOW and has developed into one of the most accessible public collections in Australia. “Being Director of the Art Collection has been a highlight,” she said, “in particular, being able to purchase a major Lloyd Rees painting of the Illawarra and having the opportunity to meet the donors and artists who have made our collection possible.”

While Executive Dean, Professor Lawson also took on a key role in the successful bid for the ARC Centre of Excellence for Australian Biodiversity and Heritage (CABAH).  In 2017 she became Deputy Director of CABAH, which is based at UOW, and led a national team of Education and Engagement researchers.

Connecting audiences with the complex human and environmental history of Australia has been a rewarding finale to Professor Lawson’s career.

“I’ve gained some insight into the deep history of Australia, its geological, cultural and archeological histories,” Professor Lawson said, “and there are endless possibilities for telling those histories to new audiences here and internationally.”

Professor Lawson is now an Associate Investigator with CABAH, and is working on the  CABAH Art Series, a program she initiated in which artists are commissioned to work alongside researchers.

Professor Lawson spent her childhood in a rural area in the north of Scotland, where culture was all around, but there was not much opportunity for children to engage with and experience creative arts. “I grew up in a world where there wasn’t easy access to the arts. I remember going to a contemporary art gallery in Glasgow when I was a teenager and being in awe!”

Throughout her impressive career, Professor Lawson has always maintained her passion and advocacy for the importance of the creative arts. This year, she said, has truly brought home the role that the arts play in our daily lives.

“Interestingly, in 2020, when the absence of live performance and exhibition has made a significant gap in our lives, when people have had to rely on their own resources – whether it’s making their own entertainment or enjoying other people’s ‘living-room’ creativity – I think the value of the arts has become more widely understood”, Professor Lawson said.

“Yet the arts still need strong voices, to ensure they achieve recognition and funding, to ensure that everyone has access to enjoy and to participate in creative endeavours. And UOW is in a great place to be part of that strong, national voice.”

“The Emeritus award is an acknowledgement from UOW that I value greatly. Finding out I was nominated by two outstanding creative professionals and colleagues whom I regard very highly is extra special,” Professor Lawson said.