James Christian talks about advocates, agitators and the future of Land Rights in NSW

NSW Aboriginal Land Council CEO James Christian delivered the 2019 Goldring Lecture at the McKinnon Building at the University of Wollongong on Thursday night.

The lecture room filled with dozens of people who have a vested interest in law, including Vice-Chancellor Paul Wellings.

The lecture title was ‘Advocates, agitators and the future of Land Rights in NSW’ and Dean of Law Colin Picker said Jack Goldring would have been proud to see this topic covered.

“This is a rare opportunity to hear from someone who has seen how the law is implemented,” Mr Picker said.

In the lecture Mr Christian acknowledged the honourable tradition of significant legal figures who advocated for the rights of Aboriginal people, including Jack Goldring himself.

He explored the mark made by these legal figures and the historical climate in which they were operating. He praised the work of John Hubert Plunket who successfully prosecuted the Myall Creek murderers for the murder of 28 Aboriginal men, women and children in the New England region of NSW and Fred Chaney, a young lawyer who represented Aboriginal women who had lost children during the Stolen Generations. 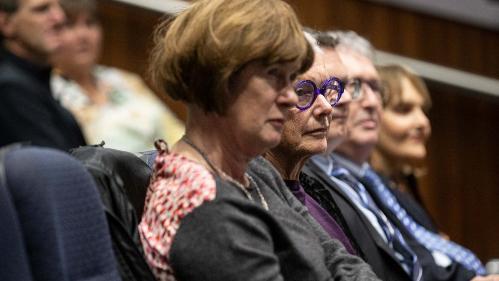 Mr Christian also spoke to current issues, advocating for the implementation of the Uluru Statement and imploring lawyers to work for a just, fair and reconciled Australia.

“I hope I’ve convinced you that Jack Goldring’s interest in Land Rights was worthwhile and that the efforts of my people to recover some of the land that was taken from us is a noble cause worth supporting,” Mr Christian said.

Professor Goldring was appointed as Judge of the District Court of NSW and served as Commissioner of the Australian Law Reform Commission.

The $10,000 scholarship is awarded to a current law student who has demonstrated outstanding academic achievement and a strong commitment to social justice. 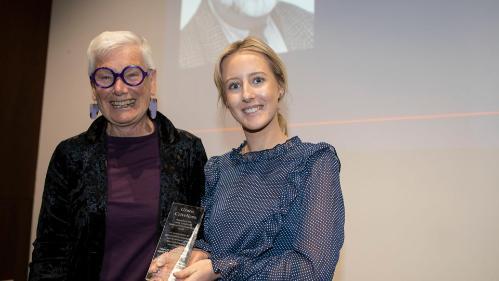 This year, the Scholarship was awarded to Grace Crivellaro, who is in her fourth year of a Bachelor of Journalism/Bachelor of Laws.

Grace, from Wagga Wagga, has enjoyed the scope law has provided for volunteering opportunities.

In 2018, Grace spent eight months at the Aboriginal Legal Service.

“I really loved volunteering there, it was a great experience, I could put my skills into practice and I didn’t have to wait until I graduated until I could help people,” Grace said.

“It’s one experience I really hold close to my heart, because I could see how people are disadvantaged under the law. It reinforced why I was studying this degree, and how I could help people in a practical way.”

During her time at university, Grace has also volunteered in the communications department at SCARF, giving voice to local refugees through her writing.

Grace was overwhelmed when she discovered she would be awarded the scholarship.

“I cried when I received the call,” Grace said.

“I am absolutely beaming, I feel so grateful and privileged to be receiving this Jack Goldring Memorial Scholarship Award. It means so much and gives me confirmation that I have been trying so hard in my degree for a good reason.”