A man, the law and the sea

The key architect in building the largest ocean law and policy research institute in the world, Professor Martin Tsamenyi, was admitted as an Emeritus Professor of the University at the Spring graduation celebration.

The accolade recognised his contribution to maritime and fisheries law in the Asia-Pacific region during his 20-plus-years association with UOW.

“The governance framework for the oceans and sustainability of the resources particularly fisheries, which is critical for sustainability,” Professor Tsamenyi said.

“Sixty per cent of the world’s population depend on fisheries for their daily protein intake. In terms of food security, there isn’t a better cause to be involved with, it is a critical global challenge.”

Professor Tsamenyi holds qualifications in law and international law from the University of Ghana and the Australian National University.

Beginning as a lecturer in Papua New Guinea, he moved on to the University of Tasmania where he became Dean of Law before joining UOW in 1993.

Under his guidance, the Australian National Centre for Ocean Resources and Security (ANCORS) at UOW has grown from a very small base to become the largest ocean law and policy research institute in the world. 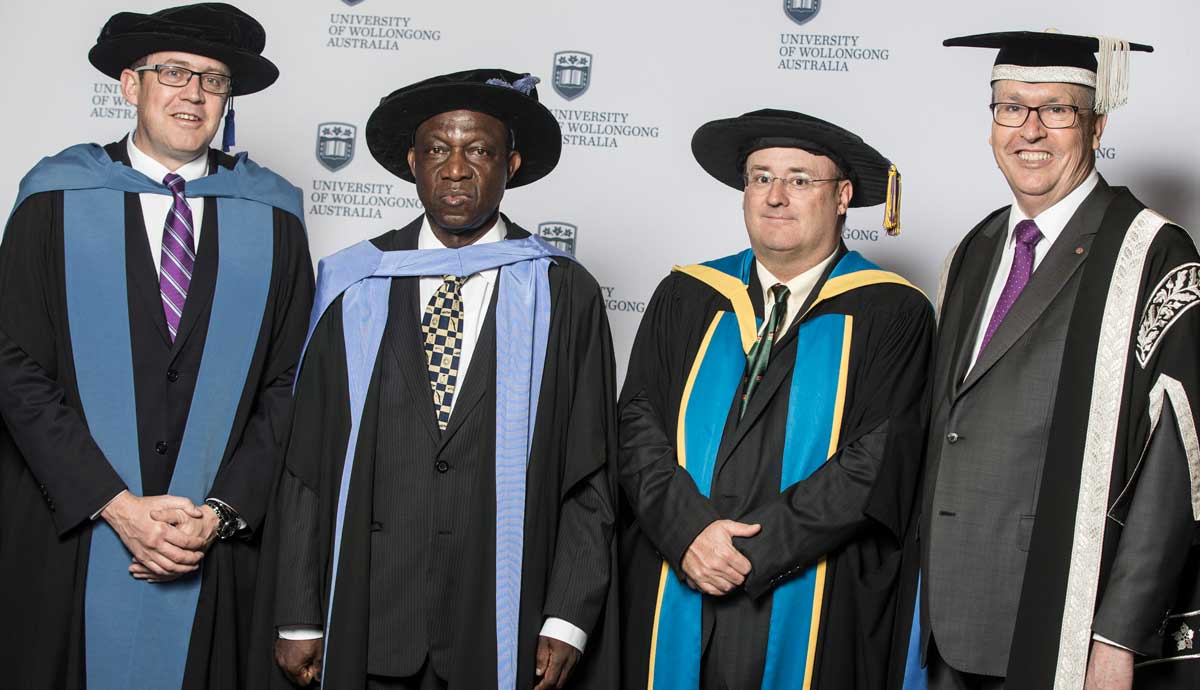 He paid tribute to the support of his staff and colleagues in addressing the governance of ocean resources, a challenge he said that at times was “one step forward two steps backward”.

Professor Amanda Lawson, Executive Dean of The Faculty Of Law, Humanities and the Arts, said in her citation speech that the relationship between humankind and the sea was at the core of Professor Tsamenyi’s life work.

“In this contrary area where individuals face internal and external conflicts, Professor Tsamenyi has sought to understand and mediate this relationship; to find a balance that respects the environment, assures peace and sustains populations,” Professor Lawson said.

“He has been the key legal adviser to both the Forum Fisheries Agency of the South Pacific and to the Western Central Pacific Fisheries Commission.

Martin Tsamenyi is, without doubt, the most sought-after legal expert on fisheries matters in this region of the world.”

In recognition of his service to maritime and fisheries law and to legal education, Professor Tsamenyi was admitted as a Member of the Order of Australia in 2012.

He has also advised the international commissions and acted as an expert consultant to the Food and Agriculture Organsation of the United Nations.

“Today, the University is privileged to add its own accolade for an outstanding researcher, academic and global authority in his field,” Professor Lawson said.

“Martin’s influence on marine policy and affairs will be an enduring legacy, not only through his own outstanding contributions but through the work of those he has taught and mentored.”

"He’s expanded ANCORS from two people to what it is today and has been extraordinary in attracting research funds and establishing international links.”