Closing a gap in Indigenous healthcare 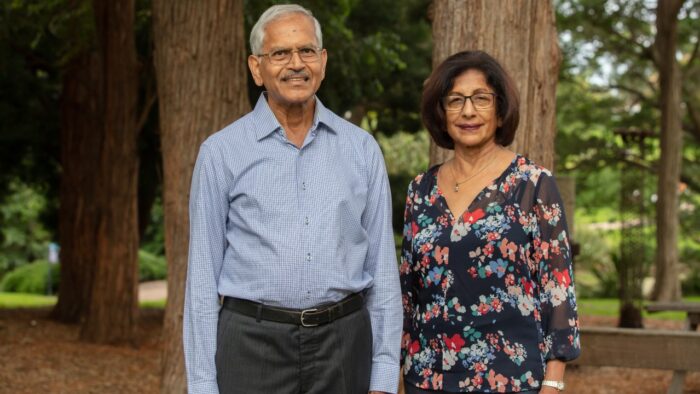 A philanthropic initiative by a Wollongong doctor is allowing the University of Wollongong to play a significant role in addressing a disparity in the healthcare system that has troubled him throughout his career. Last year, 3116 domestic doctors graduated from Australian medical schools yet only 46 were from Aboriginal and Torres Strait Islander background, according to Medical Deans Australia data.

Retired surgeon, Dr Venkata Krishna Bommareddy, known throughout the Illawarra as Dr Krishna, aims to help UOW bridge that gap by co-sponsoring a $160,000 scholarship program over four years with the School of Medicine. The program is designed to attract and retain Indigenous students throughout their medical studies.

The inaugural scholarships have been awarded to Jinneecka Klenka (Doctor of Medicine) and Madeline Hughes (Pre-Medicine, Science and Health) who will receive $25,000 and $10,000 per year respectively.

In his 45 years as a practitioner, Dr Krishna said he had not come into contact with any Aboriginal doctors, an issue both State and Federal governments acknowledge contributes to inequitable health care and poorer health outcomes for the Indigenous population.

“We are trying to get more senior Indigenous academics to come on board to help develop the curriculum.”

“Statistics show life expectancy is very low among the Aboriginal communities and they suffer high rates of diabetes as well as renal and eye problems and other health issues,” he says.

“My primary objective is to attract more Indigenous doctors (into UOW’s School of Medicine) with the hope in the longer term they will work as medical doctors in Aboriginal communities.”

Studies have shown that many Aboriginal and Torres Strait Islander people see hospitals and health care facilities as places to fear for a complex web of reasons, which include a belief that the system does not reflect their culture.

This avoidance tends to exacerbate their health problems as serious disease often goes undiagnosed and untreated.

In the past decade, Australian universities have tried to boost numbers of Indigenous enrolments in medicine and, although there has been a gradual increase over that time, they still represent 2.7 per cent of domestic students.

It is estimated that to reach parity, the number of Indigenous doctors needs to jump from 483 to 3139.

Dr Krishna studied medicine in India before migrating to Australia in 1971. In 1981, after specialist training, he began practicing as a plastic and reconstructive surgeon in Wollongong. He retired four years ago and began working as a casual tutor in UOW’s anatomy department.

Throughout his career, Dr Krishna became increasingly committed to the idea that action was urgently needed to improve Indigenous health, particularly in remote areas.

“People in those communities would feel far more comfortable with Indigenous doctors because they know the local issues and the language,” he says.

With this mission in mind, Krishna and his wife, Shashi, established the Dr Krish and S Reddy Indigenous Medical Scholarship four years ago.

However, attracting Indigenous students was a stumbling block until further discussion this year developed a new model that would draw from pre-medicine, science and health students to create a pipeline into medicine.

UOW’s Dean of Medicine, Professor Paul De Souza, is delighted with this new concept and is confident that, together with the University’s focus on strengthening Indigenous support systems, the scholarship program will achieve its aims.

“We are trying to get more senior Indigenous academics to come on board to help develop the curriculum,” Professor De Souza says.

“Our next step is to appoint a younger Indigenous academic to be nurtured and mentored by the Indigenous seniors. In that way we will create a core of support.”

Professor De Souza acknowledges the scholarship program’s potential to help realise the School of Medicine’s founding 2007 mission: to attract 50-60 per cent of the 80-student cohort from rural areas where the biggest gaps exist.

He described Dr Krishna’s benevolence, particularly at a time when universities are under financial pressure, as outstanding.

“Dr Krishna is like a beacon shining there on the hill.

If I could arrange it, I’d have more scholarships along the lines of this model, but obviously it depends on extraordinary individuals to come up with similar support.”