A brief overview of landslide monitoring

Landslide monitoring is required for a wide variety of reasons. These may include; to determine the extent, magnitude and style of landslide movement, for risk and even emergency risk management assessments and/or to assist with the design and implementation of site remedial and/or mitigation works.

Landslide monitoring can be undertaken in many forms. The monitoring may include traditional ground survey techniques repeated over time to determine movement at specific locations. It may include subsurface investigations with the aid of borehole inclinometers and their periodic manual monitoring and even continuous automated monitoring (as discussed below). Over recent years, automated robotic ground survey using various laser scanning techniques have been shown to be cost effective in certain applications. Even satellite based radar interferometry techniques over large areas at moderately high grid resolutions, with movements being detected down to cm level resolutions are being applied.

Where subsurface investigations are being carried out a widely used technique internationally involves the installation of inclinometer casings in boreholes and subsequent monitoring of the casings (typically installed vertically) using manual inclinometer probes. This technique is summarised in Figure 1.

Figure 1. Principle of Inclinometer operations, after Green and Mikkelsen, 1988.

With time, repeated visits to the site whereby full length casing profiles can be recorded, as shown in Figure 2, the displacement history of the full subsurface profile can be determined. In Figure 2, the ground surface is shown as the top most horizontal line and depth below the ground surface is shown on the left hand y axis in meters. Horizontal displacement of the ABS plastic inclinometer casing is shown in the bottom horizontal x axis in millimetres. The data shown in Figure 2 has been recorded at a landslide in the northern suburbs of Wollongong and the borehole drilling at this location shows bedrock occurs at a depth of approximately 8.2m. The inclinometer profiles clearly show landslide subsurface shear displacement occurring at a depth of between 7m and 8m below ground level with approximately 150mm of shear occurring at a depth of 7m below the ground surface. The first profile shown in this graph (the vertical y axis) was recorded on the 9th March 1989, and the last profile shown in Figure 2 was recorded on the 15th May 1996.

Figure 2. Inclinometer profiles recorded at a landslide in Scarborough, in the northern suburbs of Wollongong.

Such manual inclinometer profiling techniques have been employed in the Wollongong area for up to three decades. Since the mid 1990's, the UoW LRT has employed Coffey Geotechnics to conduct inclinometer monitoring at a number of landslide locations around the Illawarra area.

Due to its influence of ground water and pore water pressure, rainfall is an important component of any landslide monitoring strategy. The UoW LRT currently employs tipping bucket style Pluviometers to monitor rainfall.

The manually recorded monitoring history from a Scarborough landslide is shown in Figure 3. Daily rainfall totals from of Bureau of Meteorology daily rain gauge is shown along the base plot as a histogram. The cyclic periods of wet and dry are shown with the cumulative rainfall curves which total daily rainfall for the preceding 7, 30, 60, 90 and 120 day periods. Overlying this are two curves of total cumulative shear displacement as measured in two different borehole inclinometers. Above that is the really interesting section of this graph which shows the rate of landslide shear, the actual manually monitored rate of landslide movement.

This style of monitoring was discussed in detail by Flentje during his PhD research. Flentje's PhD thesis (particularly in Chapters 8 and 9) can be downloaded .

Whilst such monitoring is very useful in geotechnical engineering and engineering geological assessment of landslides, several issues are very clear. Manual monitoring is expensive, and is only undertaken on an 'as needed' basis. The stepped nature of the cumulative displacement curve in Figure 3 reflects not only the timing of landslide movement, but also the timing of landslide monitoring. Provided the monitoring occurs frequently, periods of movement are detected. If the monitoring is undertaken at low frequencies of say, annually, or even less frequently, episodes of movement may be lost in the 'averaging' effect of the long return period of the monitoring. Furthermore, such manual monitoring is not 'pro-active', it only tells you what has happened and requires some considerable reporting effort to get the information to management.

Following a long period of manual monitoring of landslides in the Wollongong region, the UoW LRT has undertaken the development of a network of Continuous Real-Time Monitoring (CRTM) landslide field stations.

Using all of the afore mentioned techniques, we have simply replaced manual inclinometers, with In Place Inclinometers (IPI's) which actually hang in borehole casings, at designated depths where manual inclinometer profiling has confirmed shear planes, or in the absence of confirmed shear planes, where it is assumed the shear planes have developed. For example, in Figure 2 above, we would position an IPI to monitor shear displacement over the interval 7 to 8m as we know the style of landslide displacement in this borehole and we would expect this style of displacement to continue.

Using solar power and batteries, we have installed data loggers out on various important landslide sites and connected to the loggers a series of IPI's, vibrating wire piezometers, extensometers, tilt meters and rain gauges to monitor various aspects of landslide and other structural movement.

The continuously monitored history of a landslide in the northern Wollongong suburbs is shown in Figure 4. The period covered by this graph is late 2003 to early 2005 and the data shown is recorded hourly. Figure 4 includes a daily rainfall histogram along the bottom which shows two events with daily totals exceeding 80mm per day in April and October 2004. Over this period the In Place Inclinometers have provided excellent data. The IPI rate of shear displacement curves clearly displays two prominent spikes of accelerated displacement commencing on the 4th April and the 21st October 2004. The movement event, which commenced on The 4th April, continued for 5 days and peaked at 2.4mm per day. This was triggered by rainfall of 110mm and 106mm on consecutive days. The movement event, which commenced on the 21st October 2004, lasted for 7 days and peaked at 2.7mm per day on the second day. A maximum daily rainfall of 81.5mm and several other days of 15mm to 30mm triggered this short duration of movement.

The vibrating wire piezometers (vwp) have both shown quite strong responses to the rainfall.

Figure 4. Continuously logged monitoring history of a northern suburbs landslide for the period late 2003 to early 2005.

This style of monitoring data is available in near real-time (subject only to the on site logging interval) via a secure password protected web-interface developed by the UoW LRT and the UoW CEDIR group. The site is password protected as it is a research application at this stage and it is constantly evolving.

Geoscience Australia (GA) has been undertaking a Database Interoperability project investigating means by which spatial data bases can be linked and collectively queried. As a pilot project, Landslide Inventories developed at the University of Wollongong, and Mineral Resources Tasmania have been linked via the internet to GA's National Landslide Database. The web portal is in the early stages of development and can be found on the Geoscience Australia website

The Landslide Research Team at the University of Wollongong (LRT - UOW) strives to maintain and enhance the quality of research and to gain extensive feedback.

Participation in national and international conferences helps this process and also facilitates fuller understandings of the work of other researchers and professionals. Excellent feedback about our research was received at many conferences including the following recent conferences where we presented papers and participated in other ways (eg chairing of panel, delivering keynote papers).

The following presentations have been given by Dr. Phil Flenjte, at selected recent events:

Doctor Sergio Mora-Castro visited the University of Wollongong in May 2008 and presented two seminars in the School of Civil, Mining and Environmental Engineering. With the kind permission of Dr Mora, the two PowerPoint's from these seminars can be viewed and or downloaded here:

Dr Mora is a highly experienced Engineering Geologist and has been Head of School and Professor at the Central American School of Geology, University of Costa Rica. From 1998 - 2007, Dr Mora was Environmental, Natural Resources and Risk Management Specialist at the Inter-American Development Bank, with assigned duties in Dominican Republic, Haiti, El Salvador, Bank's Headquarters (Washington, DC) and Bolivia. He has been involved in many large scale disaster type situations and reviews. Currently, Dr Mora is an engineering geology consultant working within environmental, natural resources and risk management discipleines.

Recent work (web sites and associated publications) concerning Landslide Risk Management practices within Australia and Internationally can be found at the following links.

The Australian Geomechanics Society (AGS) is a sub-group of Engineers Australia which collectively represents members interests in the fields of soil mechanics, rock mechanics and engineering geology.

In 2007, following a lengthy Landslide Risk Management (LRM) review process supported by funding from the National Disaster Mitigation Program and with the help of too many people to mention here, the AGS published three guidelines including: a Hazard Zoning Guideline and Commentary; a LRM Practice Note and Commentary: and GeoGuides for Slope Management and Maintenance. These documents, listed in the following table, can be downloaded from the AGS web link shown above, then selecting Landslide Risk Management and then selecting Downloadable documents:

Geoscience Australia (GA) has been undertaking a Database Interoperability project investigating means by which spatial data bases can be linked and collectively queried. As a pilot project, Landslide Inventories developed at the University of Wollongong, and Mineral Resources Tasmania have been linked via the internet to GA's own National Landslide Database. The web portal is in the early stages of development
In late 2007, GA published the Natural Hazards in Australia Report. This far-ranging report covers Tropical Cyclones, Flood, Severe Storm, Bushfire, Landslide, Earthquake and Tsunami. The report can be downloaded

GNS Science has recently published guidelines for assessing planning policy and consent requirements for landslide prone land. These can be downloaded here:
http://www.gns.cri.nz/Home/Our-Science/Natural-Hazards/Active-Partnerships 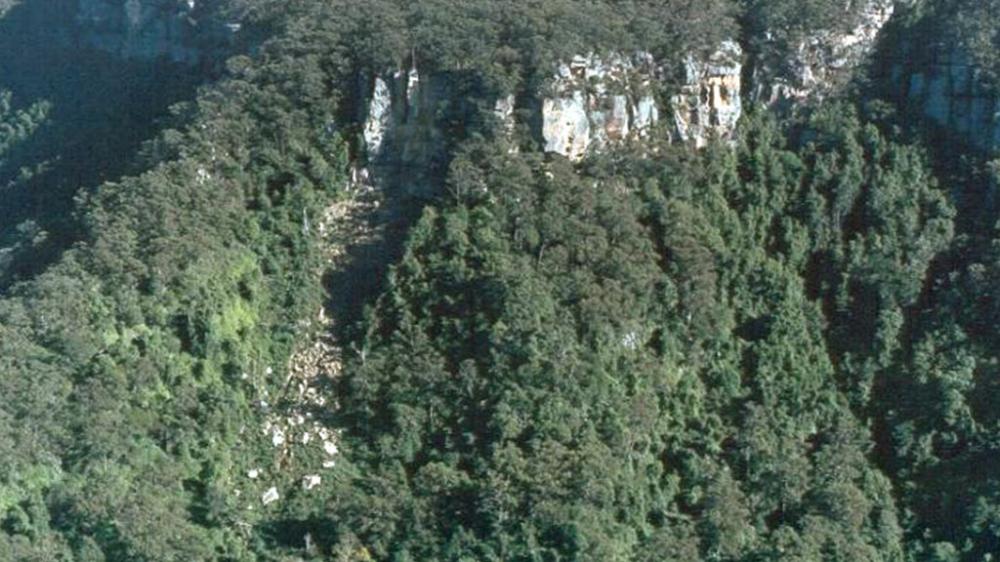 Rockfall above the Avon area - first observed May 1995. Photo by Rob Martin 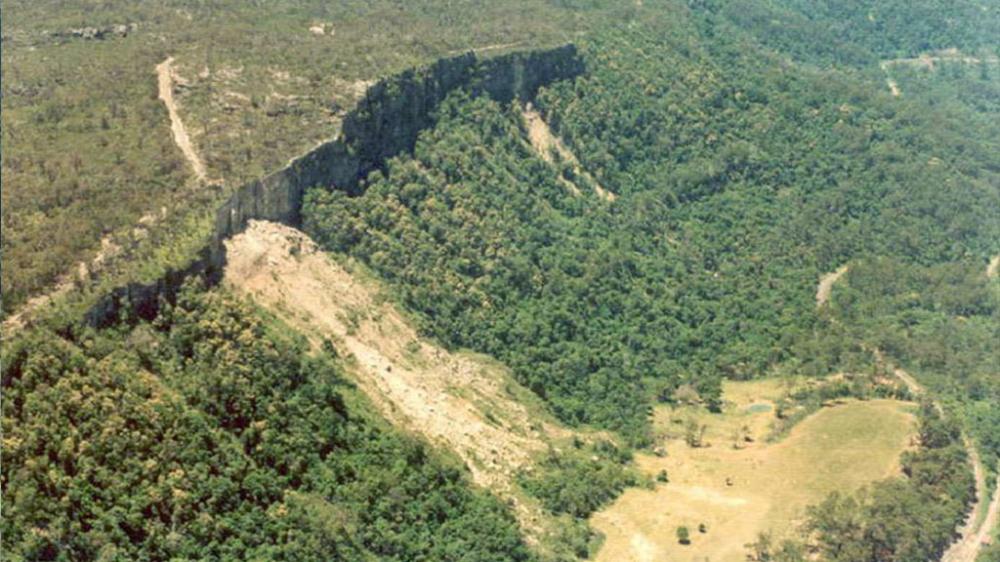 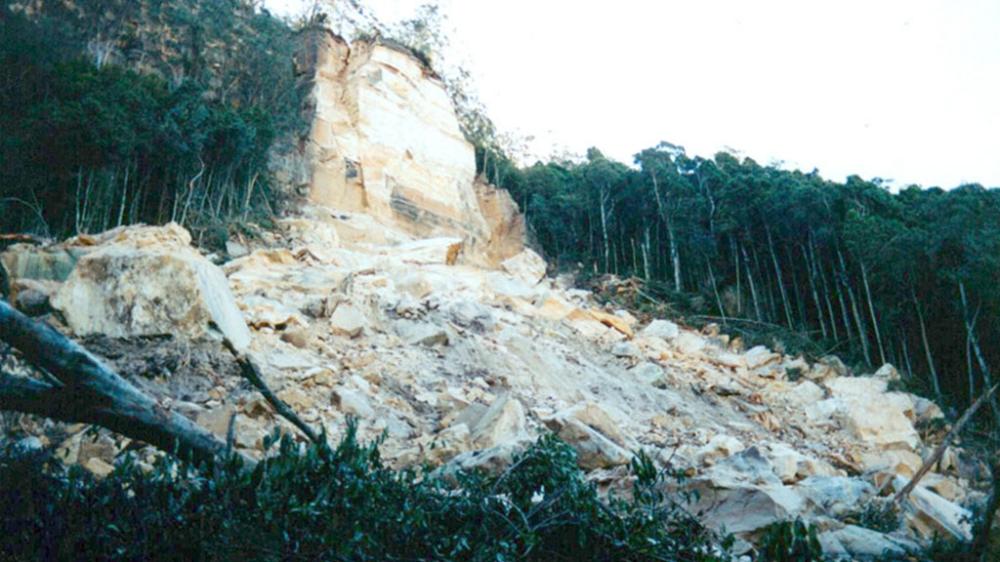 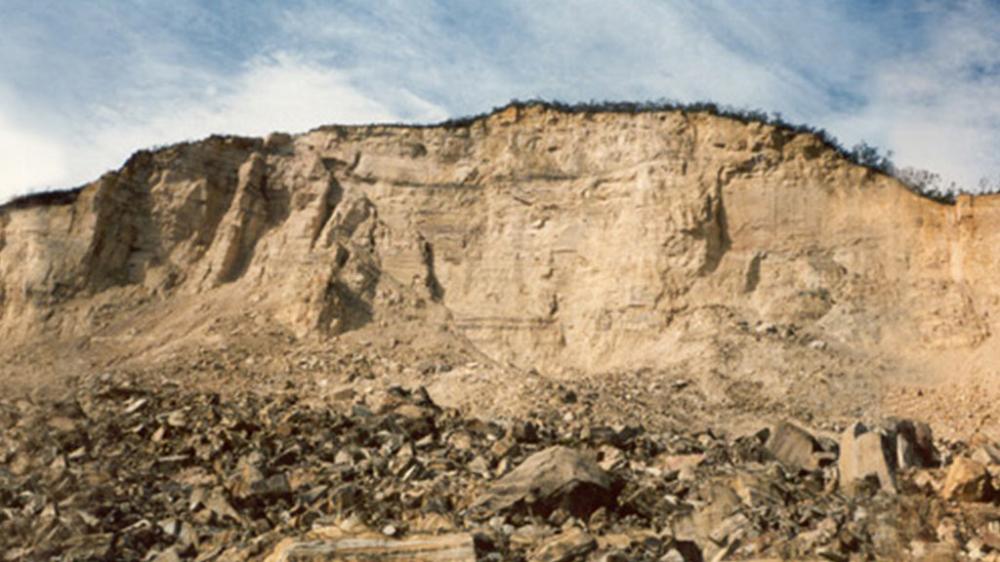 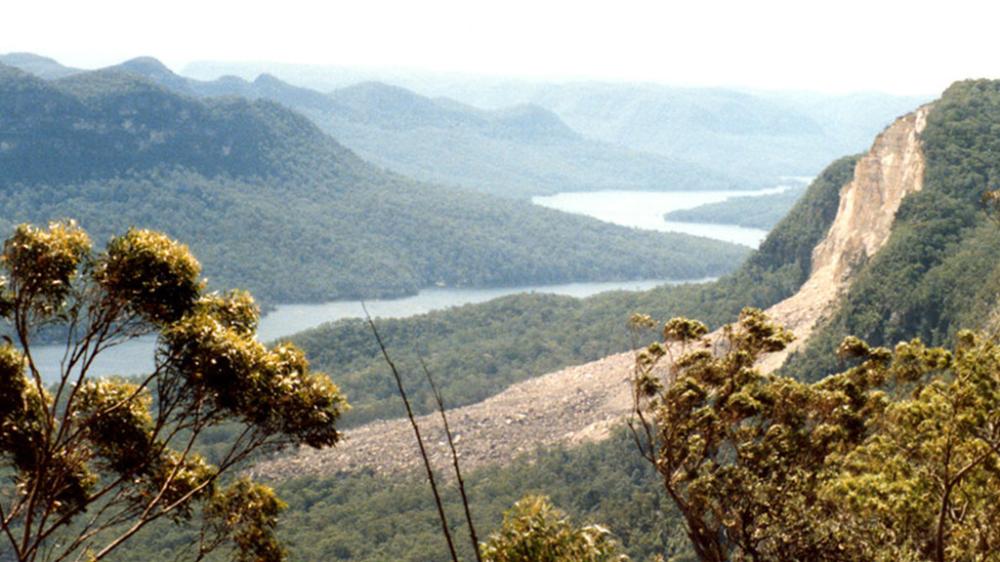 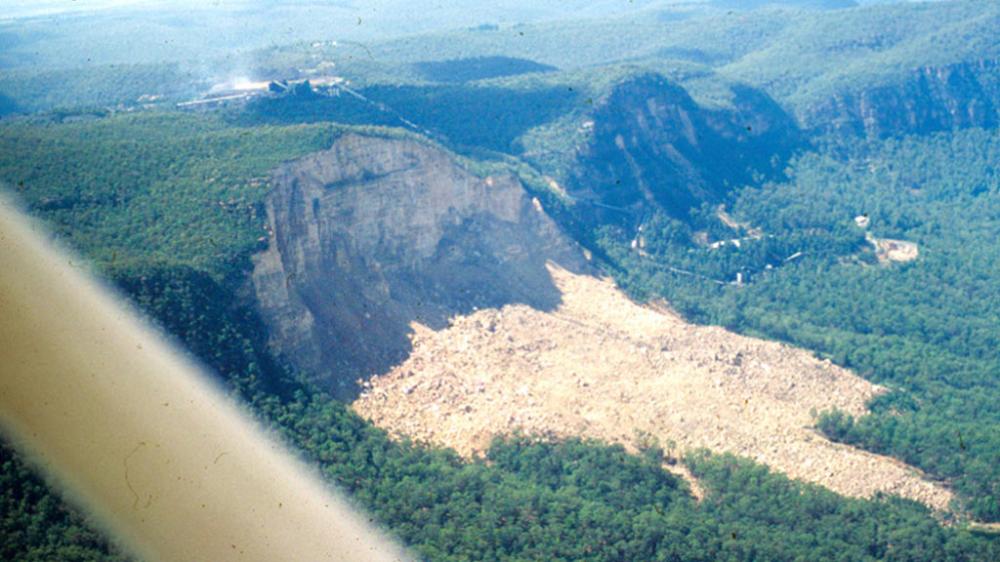 Rock avalanche oblique aerial overview. Rockfalls occurred in this area on numerous occasions between 1963 and early 1984. Photo by David Cunningham, 1986 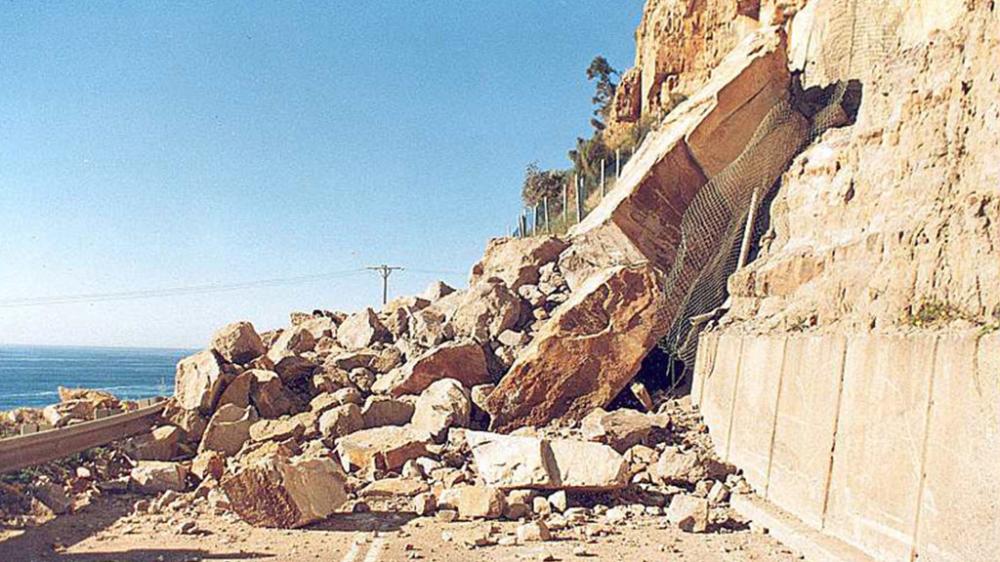 Rockfall on the old Lawrence Hargrave Drive between Coalcliff and Clifton in 1987. Photo by Greg Kotze. 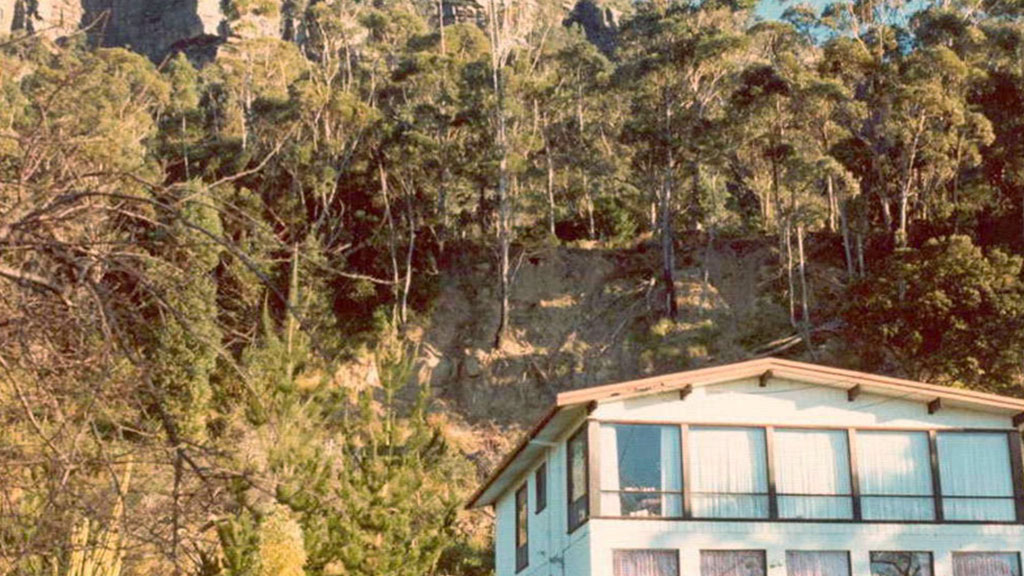 Shallow debris flow, from Scarborough Sandstone cliffs, which flowed to the rear of the house in the foreground, above Morrison Avenue. Photo by Ann Young. 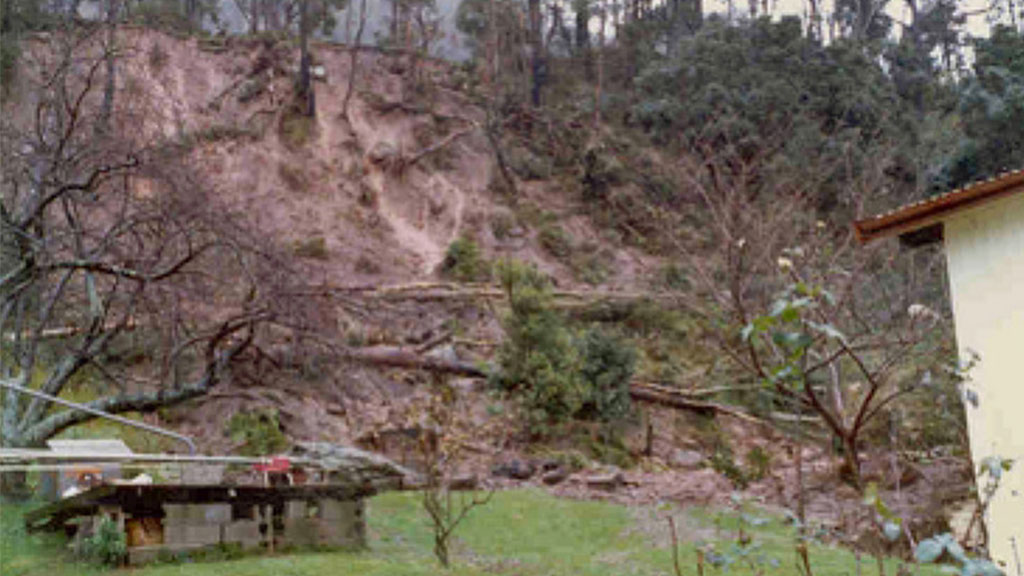 Debris flow travels out to impact on rear of house.
Photo by Ann Young. 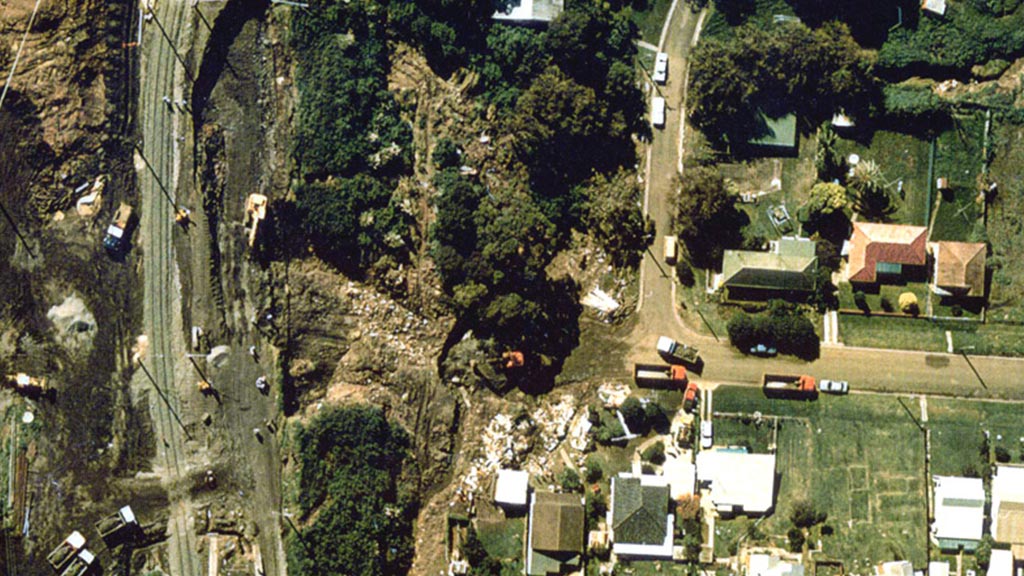 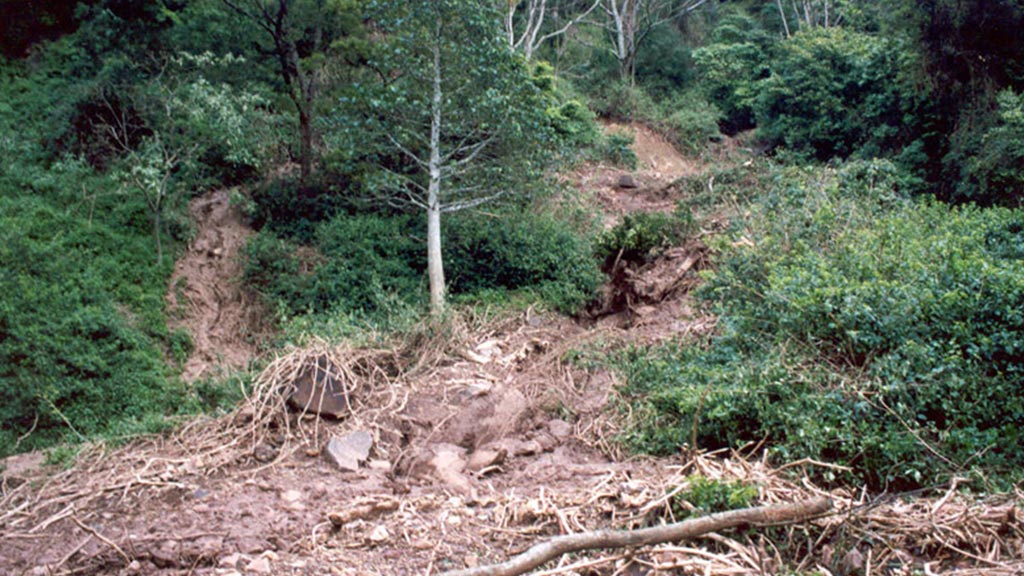 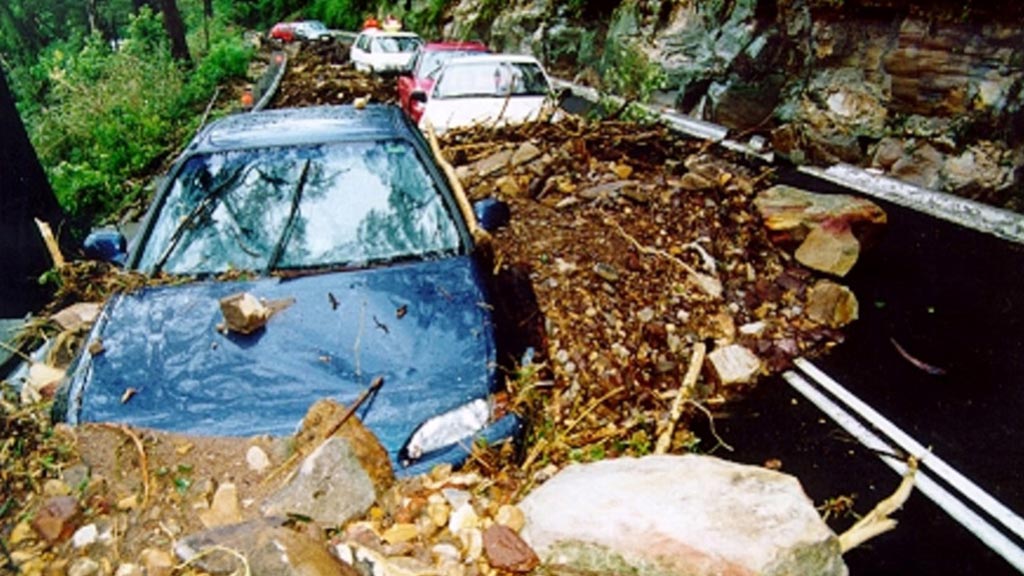 Bulli Pass in the early morning on the 18th August 1998. Numerous cars trapped in debris. Photo courtesy of the NSW SES. 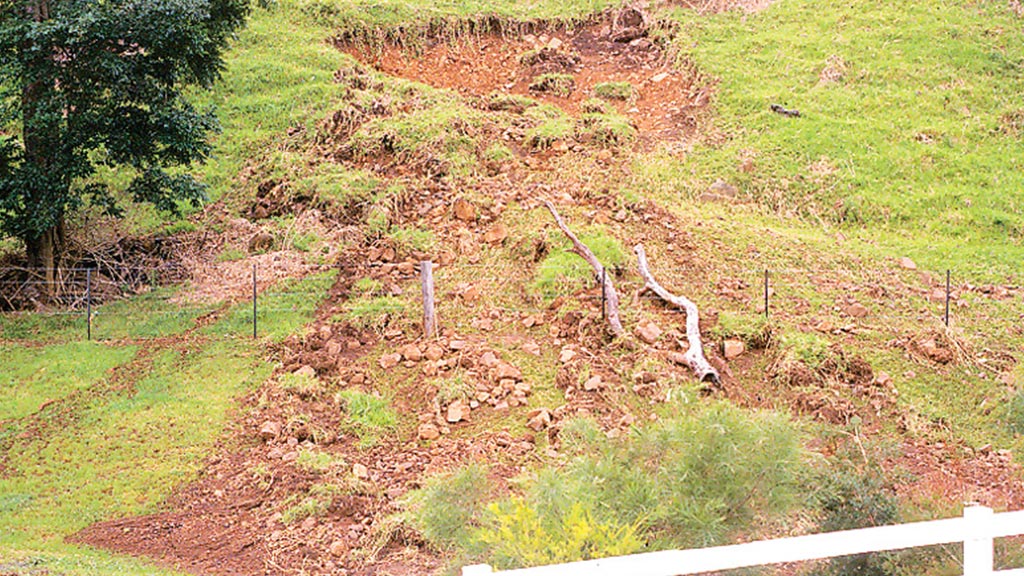 Small debris flow near Darragh Drive, Figtree. Debris flow occurred between 9 and 10am on the 24th October 1999 during 48 hours of heavy rainfall. Photo by Phil Flentje. 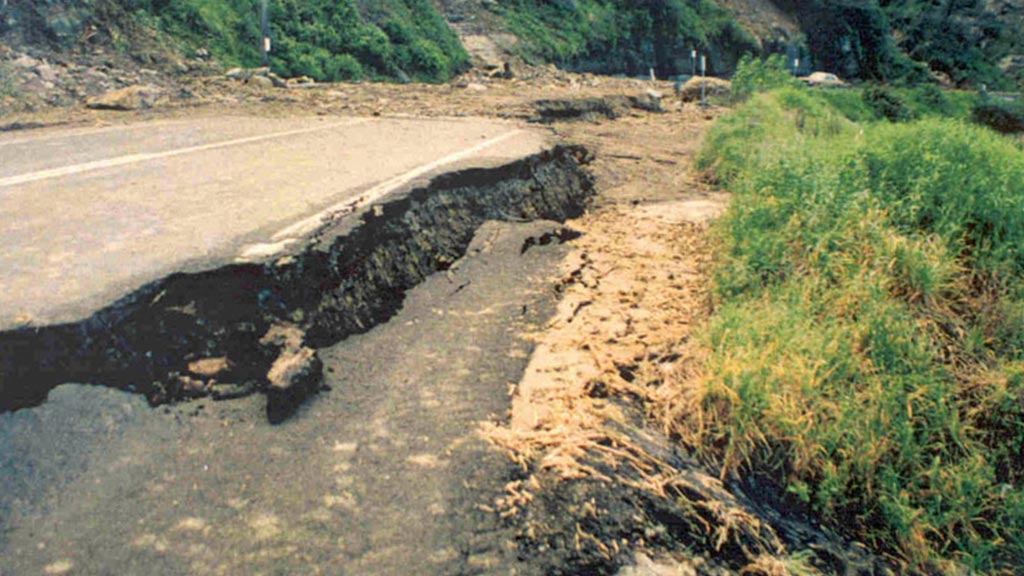 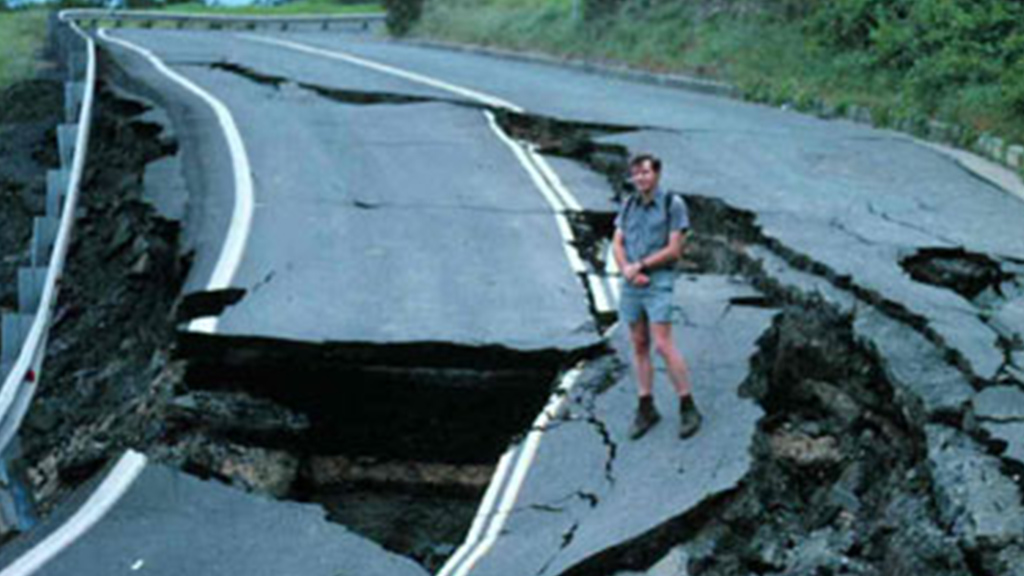 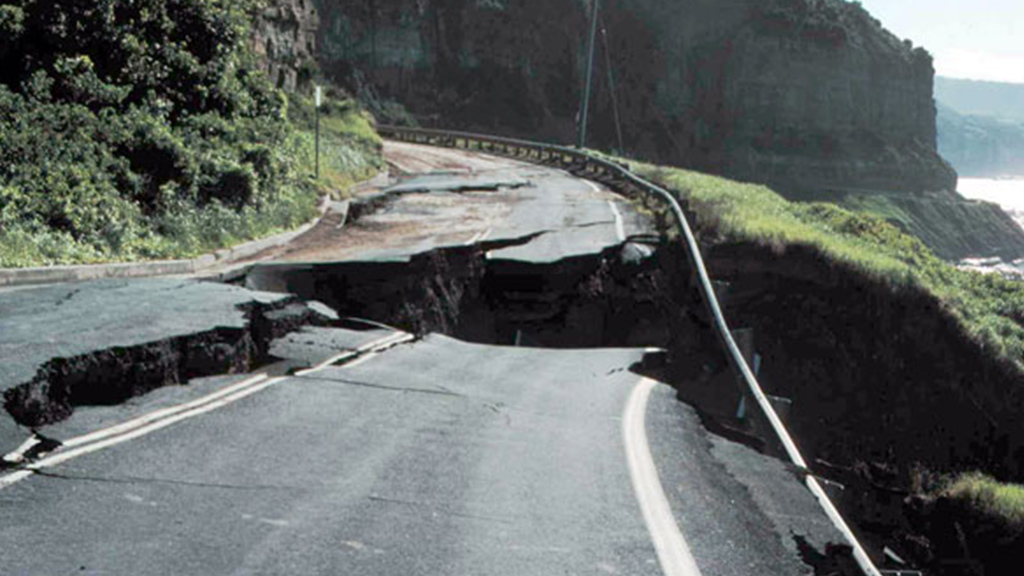 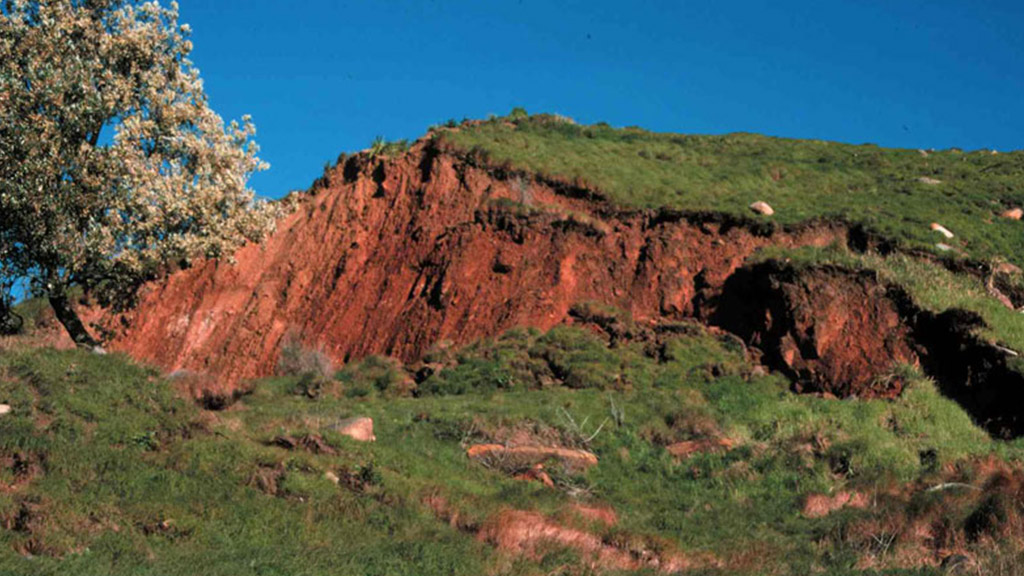 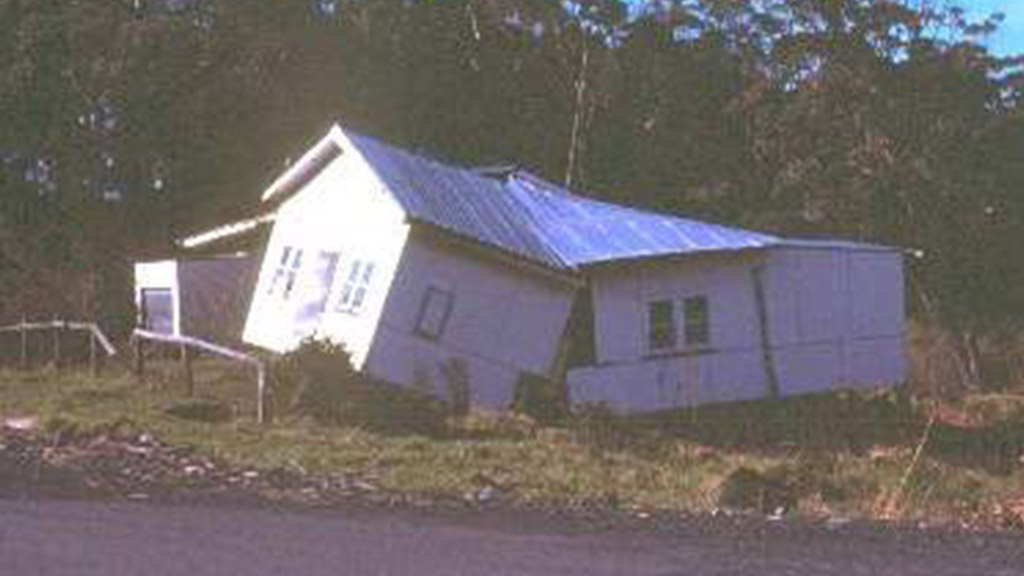 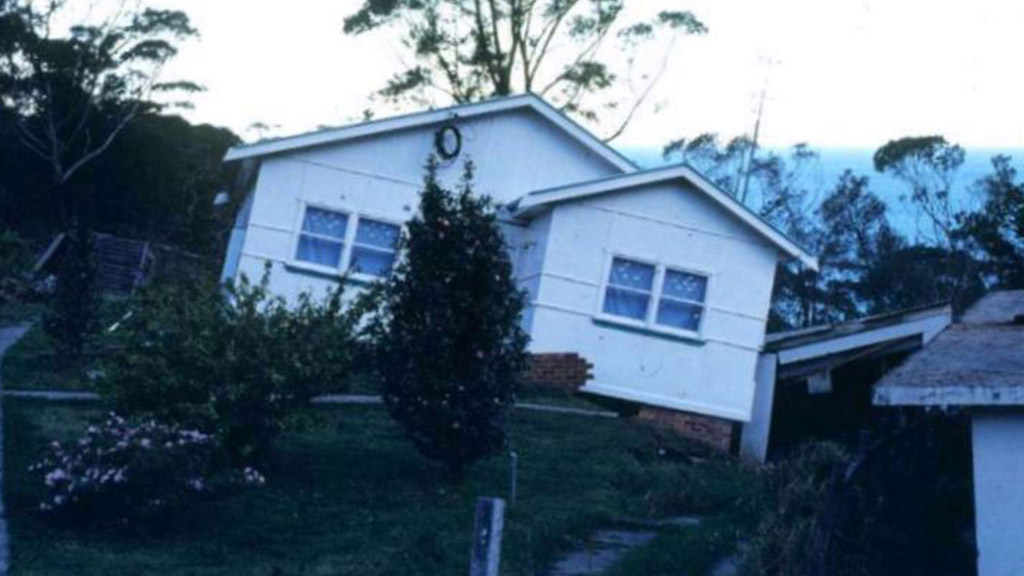 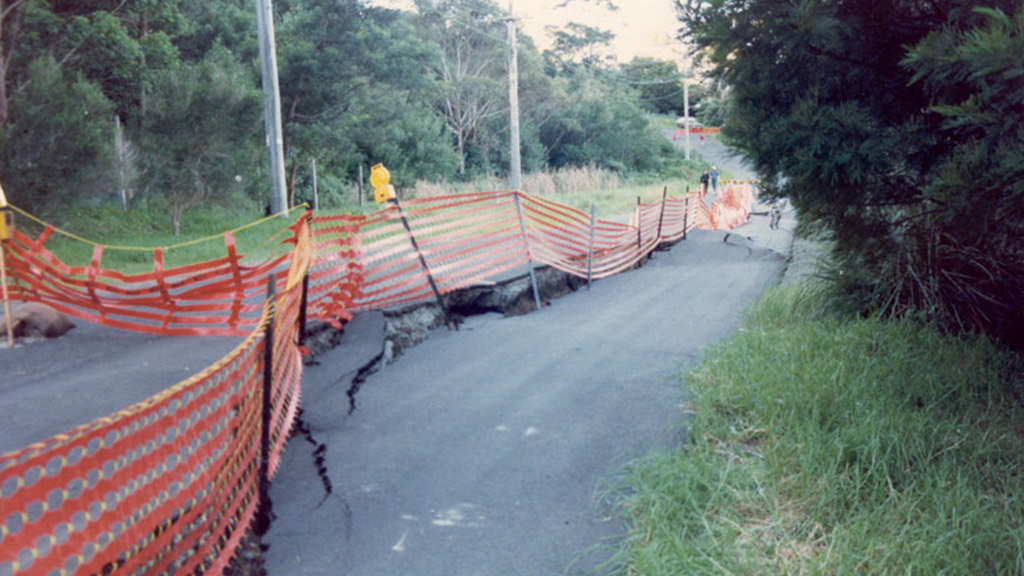 Damage to the pavement of Morrison Avenue, April 1990. Photo by Phil Flentje 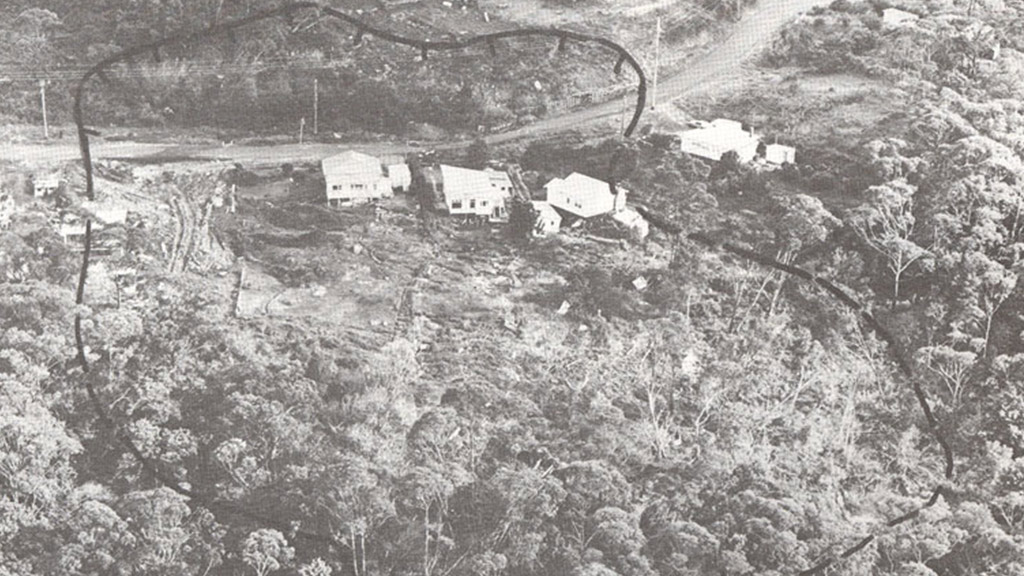 Oblique aerial view of the site 77 landslide. Morrison Avenue, then lots 1 to 6. 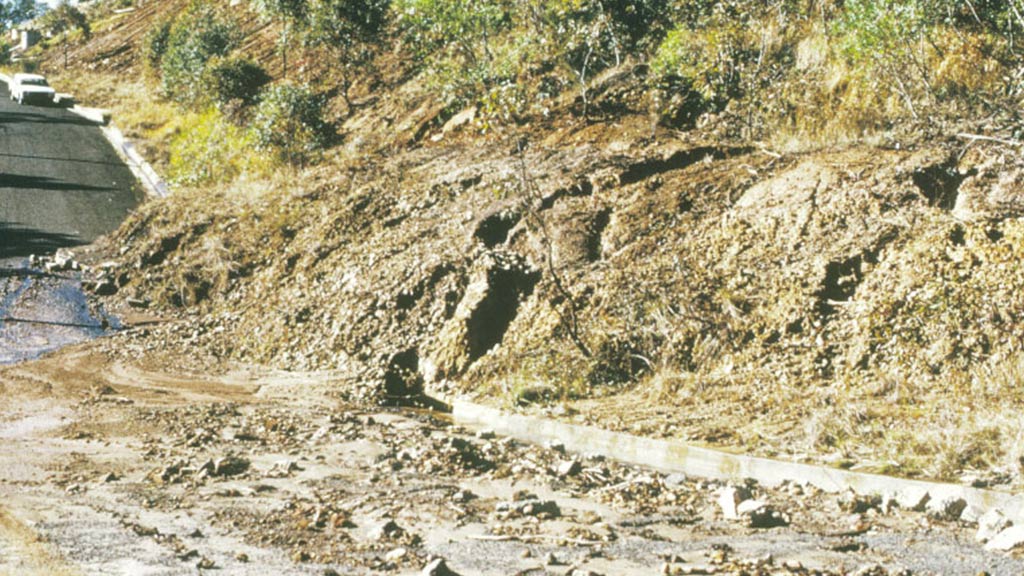 Slide of colluvium material out onto Cope Place. Photo by Ann Young 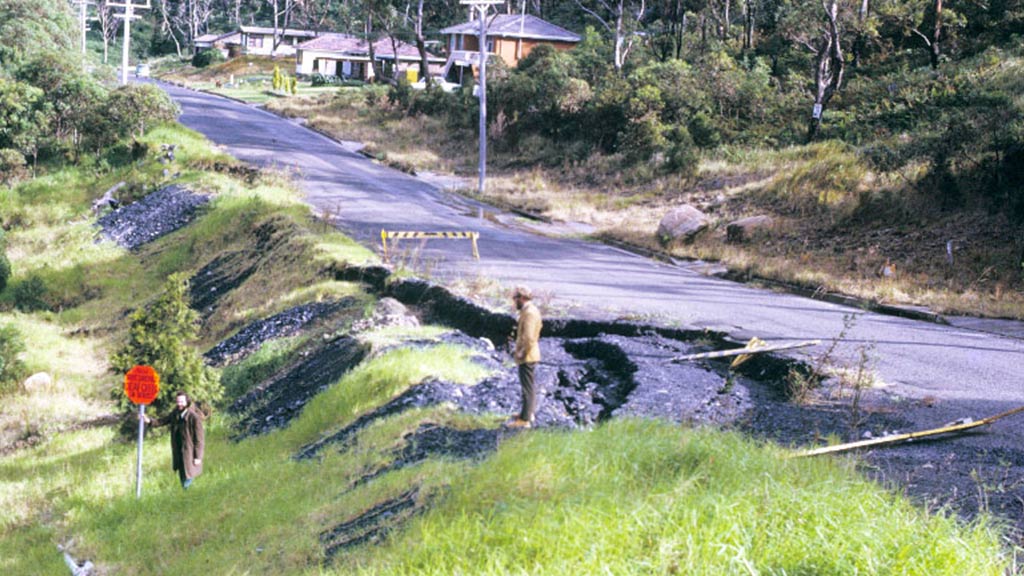 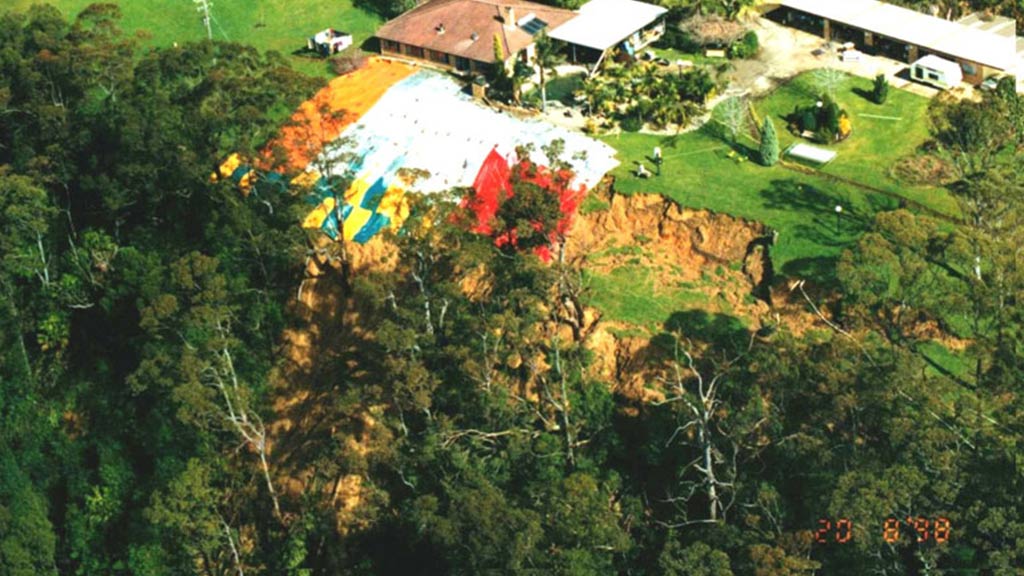 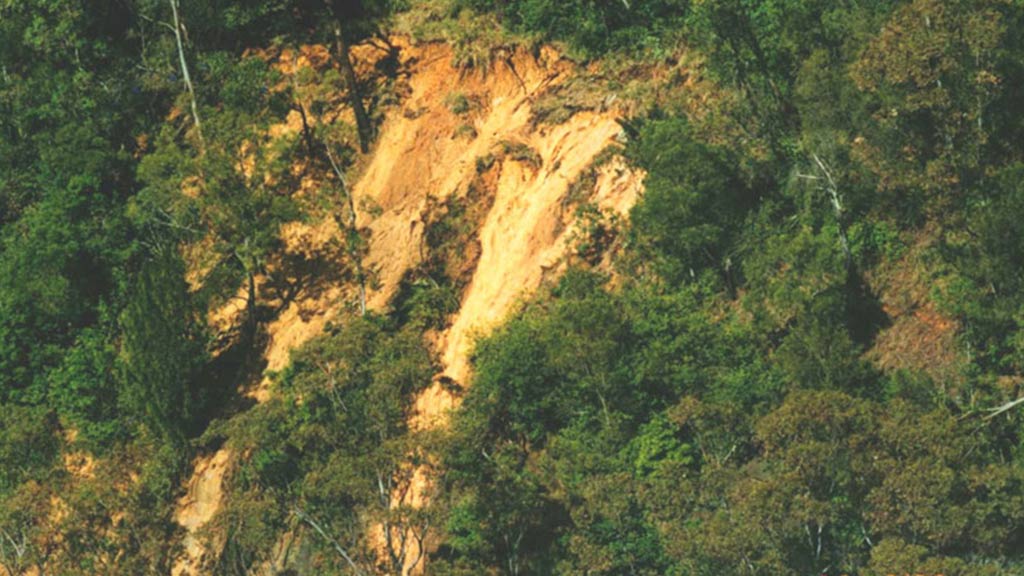 Landslide on the northeastern side of Mount Kembla above the Fire Trail. Close up photo shows a debris flow area within the larger slide mass. Photo taken by Polair and the Geotechnical Team, 21st August 1998. 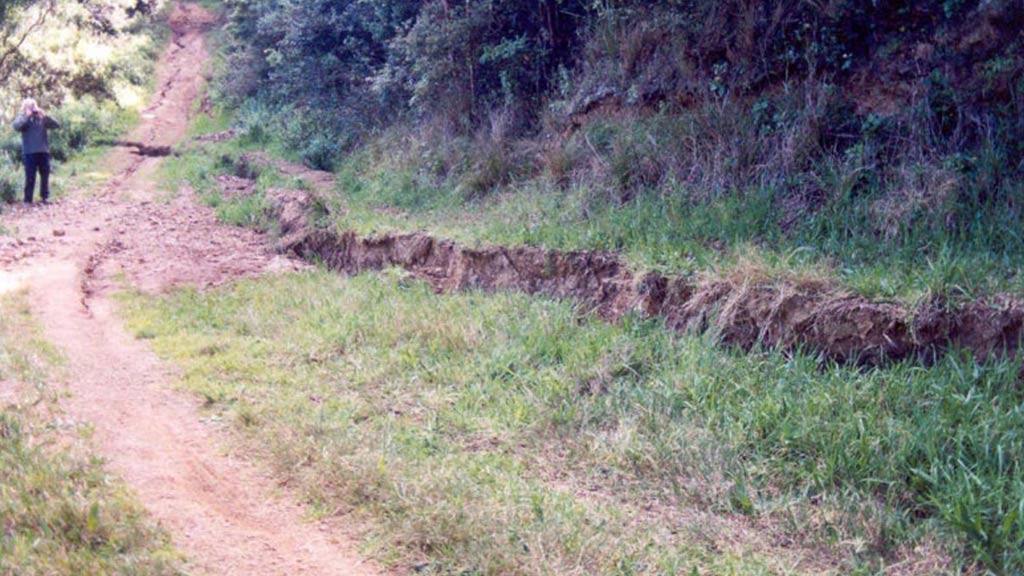 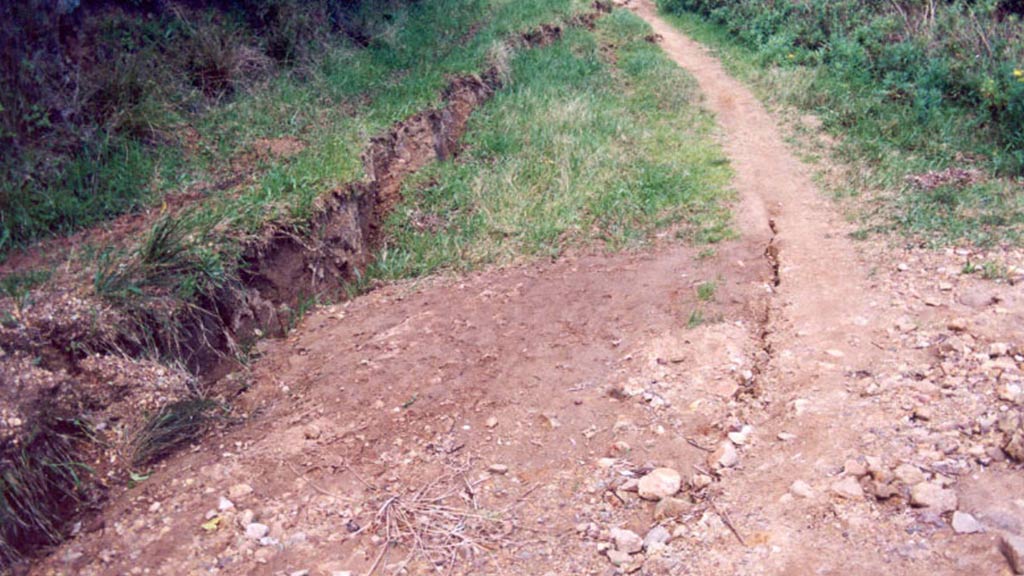 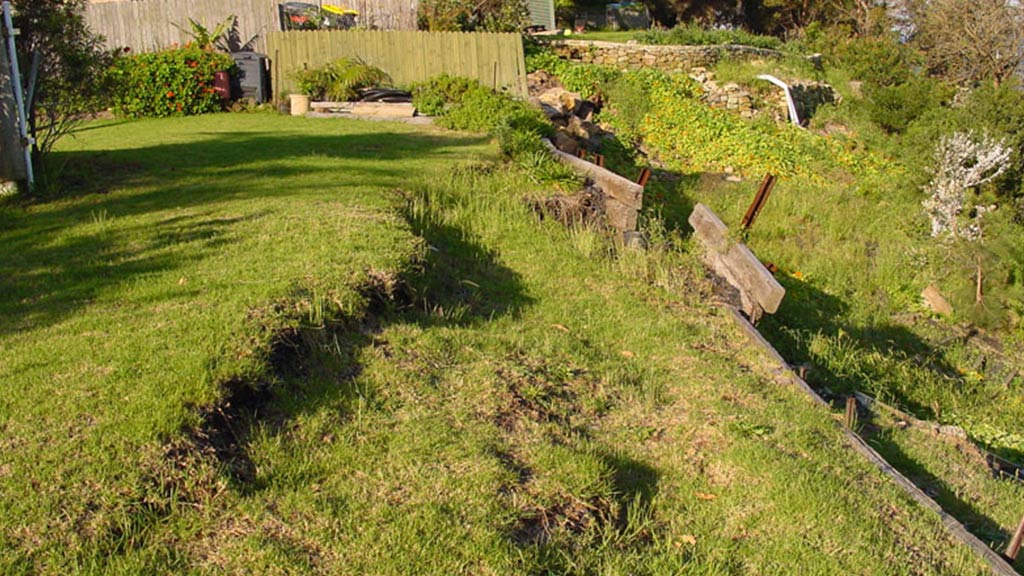 Head scarp area of large slide which moved during August 1998 rainstorm event. Photo by Phil Flentje on the 25th October 2004 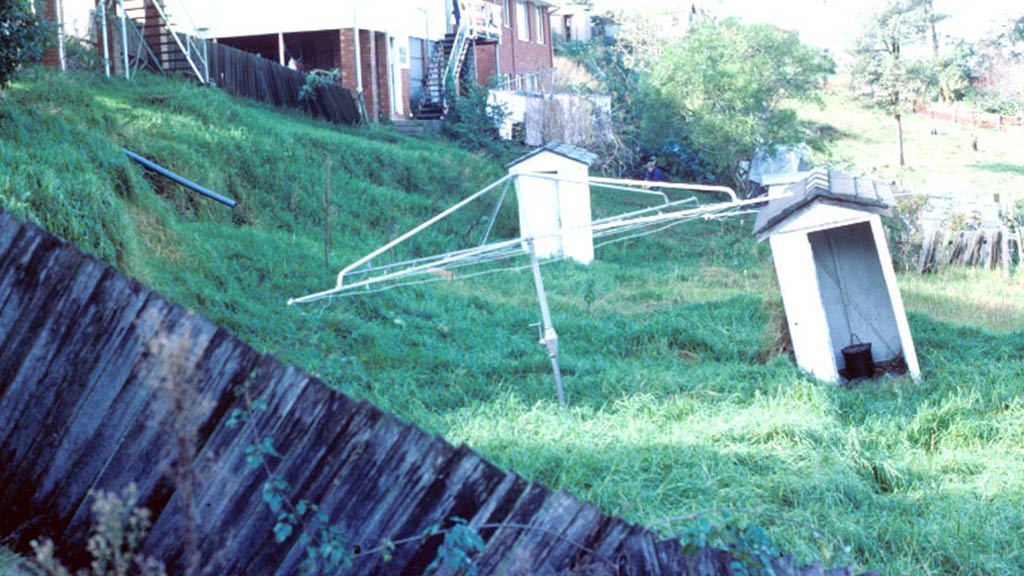 Landslide affecting the rear garden of properties on the south side of Georges Road, Bulli after 1974 landslide. Photo by Ann Young. 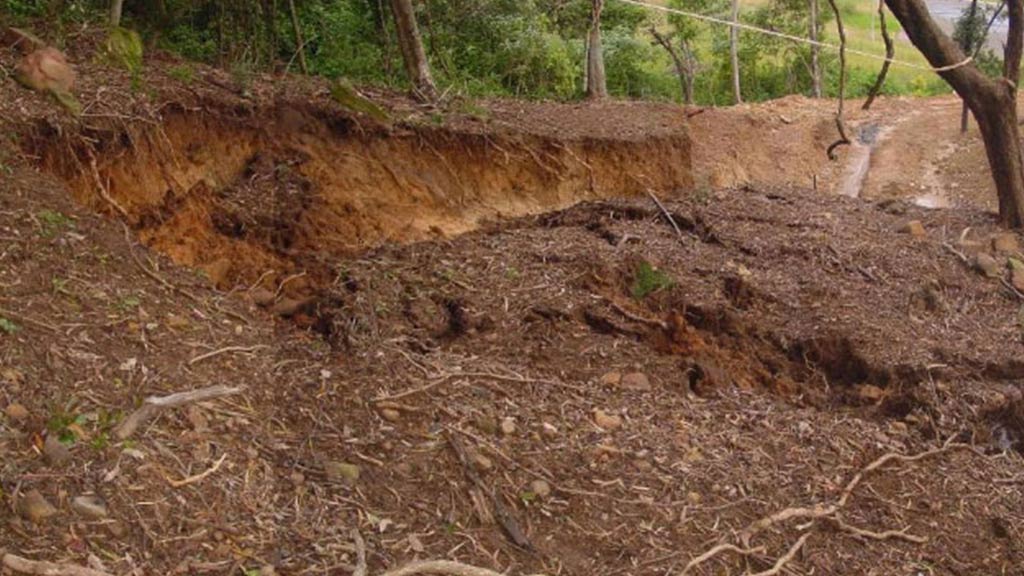 A man induced landslide, 10am 5th April 2004 during heavy rainfall. Collapse of a 3m high unsupported excavation and slope above onto rear of house. Photo by Phil Flentje