Zach Stewart is kicking down doors to create change

For Zachary Stewart, education has been the key to opening the door to his future. But it was a future that Zach didn’t even know was possible until his final years of high school.

The proud Kamilaroi man attended Endeavour Sports High School in Sydney, and for most of his life, he thought his career would lie in rugby union.

Attending TAFE or getting a trade was his plan B, but rugby was where he devoted the majority of his thoughts, time and energy – and not to mention daily training sessions.

“I didn’t even consider university,” Zach says now. “I didn’t have the marks, but I was also never told I was smart enough to go to university. It just wasn’t even on my radar.”

But as he was beginning Year 12, Zach’s participation in the Clontarf Foundation, a non-profit organization that helps young Aboriginal and Torres Strait Islander men to finish high school and find employment, guided him to understand the different options that were available to him. Whether that be higher education or straight into the workforce.

At the same time, Zach was involved with NRL School to Work, an education and employment program that provides Aboriginal and Torres Strait Islander students with work experience, mentorship and employment opportunity.

With some encouragement from his school's Clontarf Director, who was his mentor, Zach began to open his mind to the possibility of university.

“He really planted that seed for me,” he says.

It was the University of Wollongong (UOW) that captured Zach’s attention. He felt at home among the beauty of the campus and was drawn to the support and facilities offered by Woolyungah Indigenous Centre. Applying via the Indigenous Admissions Program, Zach received a place in the Bachelor of Science Education, majoring in Biology.

He had always loved the subject of biology, and with two aunties who were teachers, education seemed like an organic fit. But in his second year, as Zach embarked on his first practical placement, he began to have doubts about a career in teaching.

“It was an observational placement, but I was really eager to be involved because I wanted to do know if this was something I wanted to do,” Zach says. “But I was out of my depth, being a teacher. Being straight out of high school, I just couldn’t picture myself being the authority figure in front of kids.

“And even though the education system has become much more inclusive in recent years, it is still very much seen through that Western lens, and that is hard. That system didn’t really feel like it fit for me.”

After devoting two years, full-time, to his degree, Zach was at a loss. He was on the verge of walking away from university. He was reconsidering his teaching studies at a time when he was experiencing considerable upheaval in his personal life. For Zach, it felt like the walls were closing in. 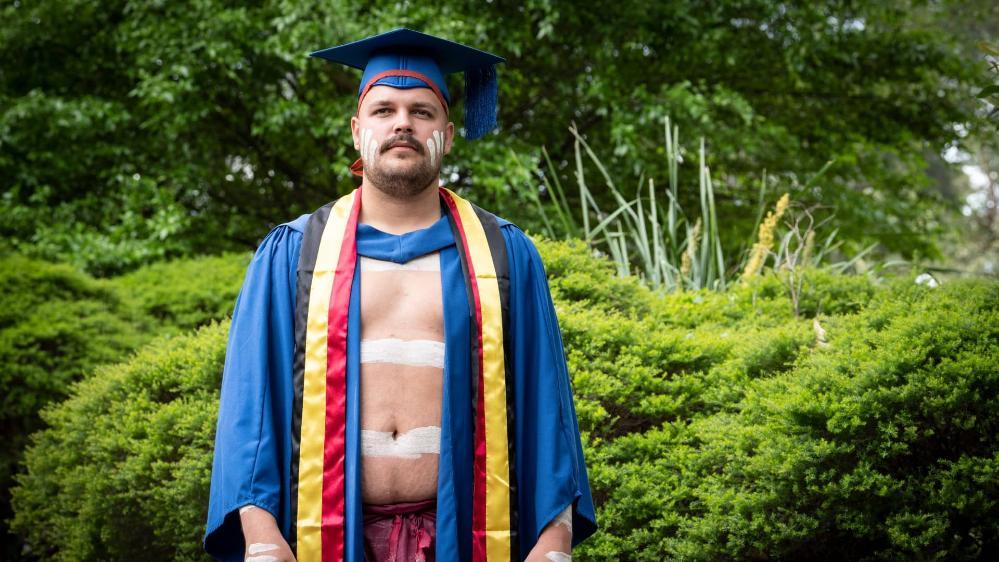 Thankfully, after reaching out the team at Woolyungah Indigenous Centre, Zach realised his future lay in public health, rather than teaching. With the support of Lesli Kirwin, who “essentially grabbed me by the ear and pulled me back”, Dr Noelene Weatherby-Fell, and Dr Joanna Russell, Zach transferred to the Bachelor of Public Health, majoring in Health Promotion.

“It felt like everything clicked. I earned really good marks and I loved the content, especially the focus on Indigenous health,” Zach says. “It was an amazing degree to be part of.  There are so many opportunities that a degree in public health can provide because it’s so broad.

“My passion lies in Indigenous Health, particularly working within schools and with young, but I have the opportunity to work across different sectors because the degree is so broad. Career wise, it has really set me up for the future.”

In addition to his studies, Zach began working with Jawun, a not-for-profit that empowers change in Indigenous community and places skilled people from corporations and government into Indigenous organisations. As part of the reporting and communications team, Zach was thrilled at the opportunity to create tangible change for Indigenous communities and use his background in health promotion to improve wellbeing outcomes.

Despite pivoting away from teaching, Zach realised he still loved engaging with young people. Now, he works for UOW’s Woolyungah Indigenous Centre as a Future Student Engagement Officer, helping to open doors for the next generation of Indigenous students who might not envision university as part of their own future. He facilitates the My Future Matters program, which covers from Sydney in the north to Bega in the south and ensures Indigenous high school students are aware of the pathways that are available to them at university.

It’s a role that suits him to a tee. It enables him to have a yarn with young people, facilitate taster sessions at university, build relationships with the students and let them know their options for higher education and other post-school options.

While his own university experience had its ups and downs, Zach said he has no doubt that the journey has led him to right where he should be. His career took him five and a half years to complete, but he was so thrilled to be celebrating his graduation this week.

“I have the experience to be able to show Indigenous kids that they can choose university as an option.

“I was once that kid who didn’t think he could be in the university space. Now I have the opportunity to show other kids that they can. There’s a lot of people who have told Aboriginal kids that we are not worthy, that we don’t belong here, so for me it is about changing that narrative. It’s about letting the future generation know they too can be in this space. The door is open, sometimes they just need our help to find a way in.”