Sitting in his living room in Ōtāhuhu, south-east Auckland, a young Andy Davis would watch television in awe as vision of French oceanographer, Jacques Cousteau, beamed into his living room.

“He cruised the world in his boat, the Calypso, and would go diving in these amazing locations,” Professor Davis reminisces. “Cousteau brought the marine environment into my lounge room and I was instantly hooked.”

The co-inventor of the Aqua-Lung, Cousteau is just one of many people Professor Davis cites when he talks about what influenced his esteemed 40-year career in marine biology. He also mentions British conservationist and artist Sir Peter Scott; marine biologist Elizabeth Pope; and speaks fondly of mentors from his University of Auckland days, where he completed a Bachelor of Science in 1979 and a Master of Science (First Class Honours) in 1982.

“I was intrigued by the marine world and then going to university and having mentors with a strong marine interest meant that marine biology was a natural choice for me,” Professor Davis says.

“I moved to Australia in 1982 to do my PhD at the University of Adelaide and that’s when I become very interested in temperate marine zones in southern Australia.

“I rejected the idea that you need to work in the tropics to be a marine biologist. Yes there is diversity and corals there, but our Great Southern Reef is very important, chock full of endemic species and unfortunately undervalued.”

Professor Davis retired in 2020, but it’s this passion for temperate marine zones and his determination to turn his research into real-world outcomes that led him back to the University of Wollongong (UOW) today (Wednesday 2 November) where UOW bestowed him with an Emeritus Professorship during a conferral ceremony at its Wollongong campus.

“It came as a complete surprise to me, however I spent so much time at UOW and it’s lovely to be recognised for my contributions.”

Emeritus Professor Andy Davis at the helm of a boat with two marine biology students during a field trip in 2015.

With a 32-year research and teaching career with UOW under his belt, the internationally renowned marine biologist’s contributions are vast.

Over the course of his career Professor Davis’ innovative cross-disciplinary research has focused on the impact human activities have on marine ecosystems. This includes climate change, invasive species, contamination and more recently the impacts vessel anchors have on the seafloor and underwater ecosystems.

“Anchoring offshore is a project worked on with one of my former research assistants turned PhD student, Allison Broad, and we examined how anchors and chains from small recreational vessels and large ocean-going ships impact the seabed environment across a range of habitats,” Professor Davis says.

“Seabed environments provide the ecological foundation for so much marine life. They are critical for the growth of seagrasses, kelp, sponges as well as corals and their relatives, which in turn support other marine life.

“An exciting outcome of this project is that the NSW Ports Authority has now formally designated anchoring areas off the Illawarra coast. This has significantly shrunk the anchoring footprint for ocean-going vessels with tangible benefits for local marine ecosystems and will allow our reefs to go through a phase of recovery.”

It’s these real-world outcomes that have driven Professor Davis since his early days as a marine biologist.

“Publicly funded science gathering dust on library shelves does not assist in tackling the challenges that humans present to natural systems, I believe that working closely with industry stakeholders is key to instituting change,” he says.

Professor Davis speaks fondly of collaborations he’s undertaken with marine parks researchers, including within Jervis Bay, where his team explored how seafloor habit maps can be used to predict the distribution of fish, and how the design of marine protected areas can help improve fish conservation and management.

“Technology has been a big part of my work, especially in marine parks, and that’s what I love about science, technology has revolutionised it,” he says. “There have always been interesting questions out there, but advancements in technology help us reveal things we wouldn’t otherwise have access to.

“I am proud of the role my research team have played in these developments. From the use of camera technology to understand changes in fish assemblages to the surgical implantation of acoustic tags in fishes. We now better understand how fish move and how they interact with the surrounding seascape.”

Professor Davis is humble. He understates his significant and sustained contribution to the field of marine ecology and management. But it hasn’t gone unnoticed by those around him. 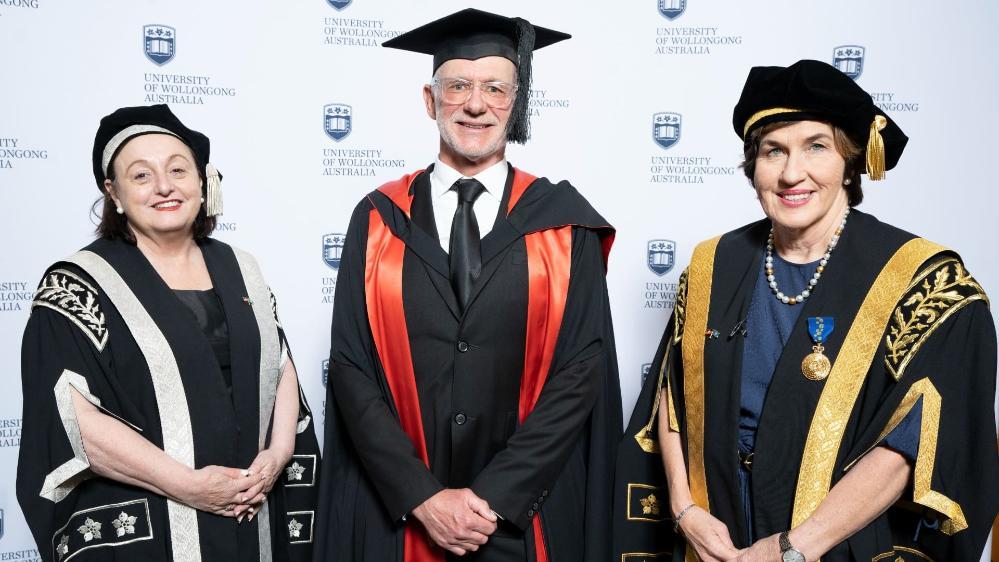 Collectively Professor Davis’ research group has produced more than 175 scholarly publications and his commitment to advancing the next generation of researchers is unprecedented.

“Over my career I have supervised 56 honours students and 27 postgraduate students to the successful completion of their degrees,” Professor Davis says. “And they’re the true unsung heroes of the work I do because they’re often the ones in the engine room testing the hypothesis and ideas.”

One of those former students is Dr Nathan Knott, now a Senior Research Scientist with the NSW Department of Primary Industries.

“Andy was an inspiring lecturer during my undergraduate years, instilling a passion for science a wealth of knowledge of the biodiversity of the Great Southern Reef, including our own rocky Illawarra coastline,” Dr Knott says.

“I was captivated by marine ecology thanks to Andy’s enthralling lectures and inspiring research and he’s the type of Professor that made the University of Wollongong a great tertiary institution.

“He was always supportive and great fun to be around.”

Dr Marian Wong, a marine biologist in the School of Earth, Atmospheric and Life Sciences at UOW and the brainchild of Professor Davis’ Emeritus Professorship nomination, echoes Dr Knott’s sentiments.

“Right from the start Andy was an incredibly supportive mentor and colleague to me when I first arrived as a lecturer at UOW and he continues to play an important role in collaborations with me and other members of the university, despite having retired,” she says.

“He is a scientist who I admire and respect for his commitment of high-quality research and teaching, but most importantly, he is someone I have always enjoyed working with.” 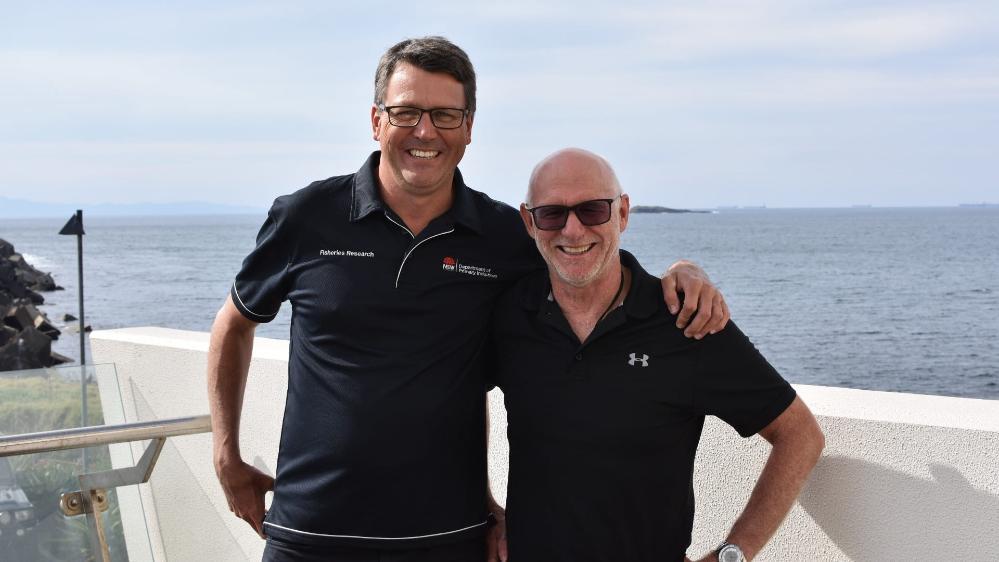 Professor Davis is equally as complimentary of Dr Wong, describing her as a wonderful colleague and cites her as a great example of another female doing wonderful things in marine biology, which he believes is an important tradition that needs to be maintained in Australia.

“New South Wales has a long-held tradition of female involvement in marine biology. Elizabeth Pope and Isobel Bennett participated in a field trip on the NSW South Coast all the way back in 1949,” Professor Davis says.

“Pope went on to be the Director of the Australian Museum, while Bennett was responsible for the seminal text on marine biology on our coast.”

“Almost 50 per cent of my postgrads have been female, as have almost 70 per cent of the postdocs working in my lab - many are now in senior positions in academia, government or industry.

But it’s Professor Davis’ contribution to the field that has earned him a global reputation for innovation, academic and educational achievement, and passionate pursuit of transformative outcomes for the environment and the life it sustains.

And despite retiring, Professor Davis hasn’t completely shut up shop, continuing to run a productive research group of five PhD students and continuing collaborations with national and international researchers.

“I’m just working on my terms now and that’s the beauty of retirement,” he laughs. “We can take the dog for a walk, go on a bike ride and learn Spanish.”

“As you get a bit older you start seeing friends get unwell, or get diagnosed with cancer, and you realise it’s time to take your foot off the accelerator and enjoy some downtime.”