Agriculture and statistics may seem like an odd match, but for Professor Robin Thompson, the two have always gone hand in hand.

Growing up on a small dairy farm in Lancashire, in the north-west of England, Professor Thompson was firmly enmeshed in the farming life but, as he explains, had no aptitude for what it truly took to work the land.

Instead, as a young boy, he was fascinated with and excelled at mathematics.

“My childhood gave me a lifelong interest in agriculture, but I had no practical skills and quickly realised a farming career was not sensible. I could add up more than I could drive tractors,” he says. “The only academic subject I was good at was mathematics. In my early teens, I used to say that I wanted to be an aeronautical engineer, just to stop the conversation!

Yesterday (Tuesday, 1 November), Professor Thompson received a Doctor of Science (honoris causa) from the University of Wollongong (UOW), for his contribution to the field of statistical genetics and his commitment to the University as an international collaborator.

Professor Thompson, who was unable to travel to Australia for the event, accepted his award via Zoom from his home in Hertfordshire and delivered the Occasional Address to graduates from the Faculty of Engineering and Information Sciences. 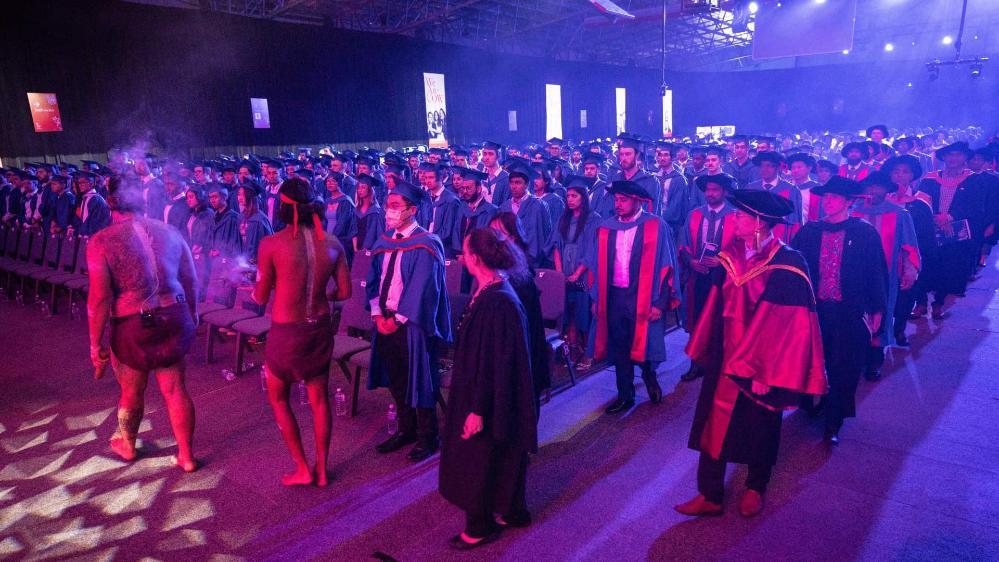 An interest in mathematics took Professor Thompson to Newcastle University, known for their exceptional agricultural department, where he gained a Bachelor of Science (Mathematics) in 1966 and a Master of Science (Statistics) the following year. After graduation, he moved to The University of Edinburgh, where he joined the Agricultural Research Council Unit on Statistics (ARCUS). He obtained his Doctor of Science in Statistical Methods with applications in animal breeding from Edinburgh in 1989.

It was there, at the age of just 23, in 1971, that Professor Thompson  and Professor Desmond Patterson made a career-defining scientific breakthrough. They developed an improved and game-changing method for animal breeding, known as Residual Maximum Likelihood (REML). The work was published in the 1971 paper, ‘Recovery of inter-block information when block sizes are unequal’, which, more than five decades later, remains the main reference point for crop and animal breeding.  REML continues to underpinsome of  the world’s most commonly used statistical analytic packages.

Professor Thompson spent the next 15 years at ARCUS, where he became one of the world’s foremost agricultural statisticians. In the early 1990s, Professor Thompson forged a strong research collaboration with UOW, particularly Senior Professor Brian Cullis, who contributed to the seminal development of the Average Information REML (AS-REML) algorithm. AS-REML remains the primary statistical genetics software in use today.

“I just wanted to do things that were useful,” Professor Thompson says, somewhat modestly. “I’ve developed methods and analysed data that have helped to write computer programs that are widely cited, and people have found them useful.”

One of Professor Thompson’s biggest sources of pride has been his relationships with his PhD students. As a supervisor, he has overseen the work of more than 30 students and says watching them go out into the world after graduation gives him great joy.

“I find it very rewarding to mentor people at the beginning of their career.”

However, his support of the next generation of statisticians continues beyond PhD supervision. A few years ago, Professor Thompson donated $100,000, royalties he had earned from the development of a widely used computer program, to the Centre for Biometrics and Data Science for Sustainable Primary Industries at UOW to establish a scholarship for students and give them the opportunity to develop their skills at the best institutions in the world. Named after the farmers where Professor Thompson and Professor Cullis grew up, the Cmajor-Drinkwater Training Award delivered its first scholarship in 2019 to Daniel Tolhurst. As a PhD student, Daniel was able to undertake research at the Roslin Institute in Edinburgh to investigate single-step genomic selection for multi-environment trial datasets. 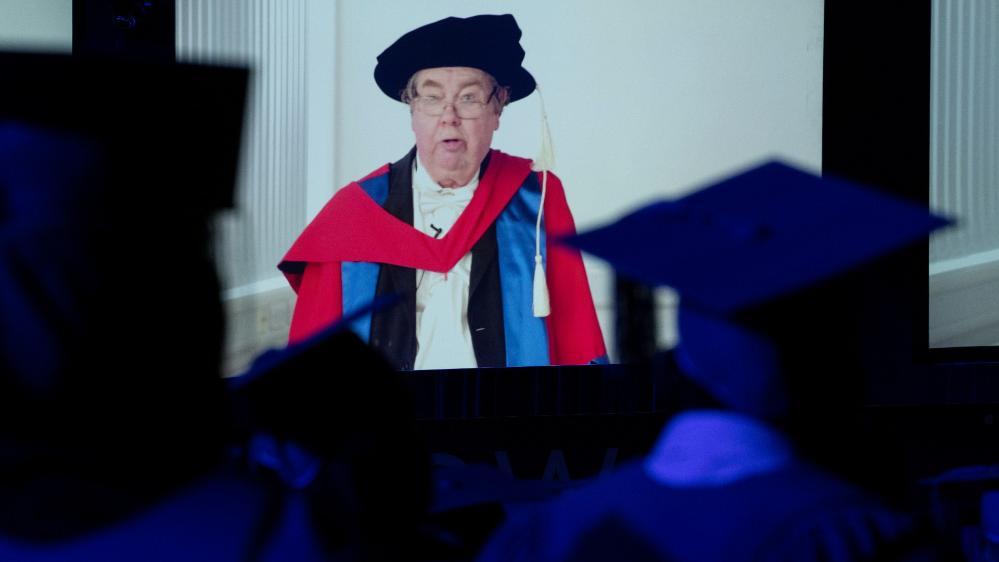 Professor Cullis said that after decades of research collaboration, he remains in awe of Professor Thompson’s intellect and the way he deciphers the world.

“Robin is truly a giant among giants. I would unreservedly say that he is a genius. His mathematical and biological insights are something to behold,” Professor Cullis said.

“He has been my mentor since 1984 or so. What Robin, Arthur Gilmour and I achieved with AS-REML and the average information algorithm has been amazing in terms of its market dominance since 1991. For software and ideas to last that long is rare in these modern times. It is only now that there needs to be a renewal with the genomic revolution.

“I have numerous stories about moments where we are sitting in a car, working on my farm with my cattle or simply sitting in a pub, when Robin asks for a scrap of paper so that he can scribble down something almost unintelligible, which turns out to solve some amazing mathematical problem. What Robin scribbles down, in 10 minutes, usually takes me months to decipher! Most others just look at the scribbles and shake their heads. It is the mark of Robin that he can do this in his head. Rather amazing.

“His generous nature is really special. He literally gives away his ideas to all and sundry, and asks for nothing in return. He has taught me how to think. He has shared his spirit and knowledge with unconditional respect and kindness with myself and so many of my students. He has been retired for over 10 years now, but he still is more productive than most.”

For his part, Professor Thompson is delighted that he has been able to marry the two things that interest him most – agriculture and mathematics. And he is grateful to be recognised by UOW with an honorary doctorate.

“It really puts the icing on the cake,” he says. “I have really enjoyed my collaborations with UOW.”

Senior Deputy Vice-Chancellor, members of the university, graduates and family, distinguished guests, it gives me great pleasure to give this Occasional Address.

I know this is a very special day for all graduates. I warmly congratulate you and your families for the accomplishment of a major milestone in your life .

I am also very grateful to the University Council for giving me this honorary degree today but also I am quite embarrassed and I will use a football metaphor to explain this.

When the football team I support, Blackburn Rovers won the English Premiership every member of the team got medals, not just the captain, nor the manager nor the centre forward who got the majority of the goals. My science has been based on teamwork so many other people deserve recognition for aiding my career. So, I wish to acknowledge some of my mentors and collaborators in this address. In effect my dream team (members named in UPPER CASE).

I am a farmer’s boy – my parents were first time farmers and had a small dairy farm near Blackburn, north west England. I wasn’t cut out to be a farmer – one of my first tasks was to chivvy the cows back to their paddock after milking, before they defecated all over the yard I can well remember my mother (MARY THOMPSON) saying to me “Look at the mess. Robin sweep it up you'll never be a farmer”.

I soon realised I had to look for another occupation.

At school, the only subject I was any good at was mathematics. For light reading I browsed The Farmer and Stockbreeder, and came across an article about a geneticist from Edinburgh, (ALAN ROBERTSON) who had developed a method of estimating breeding values of bulls – a method which my father could actually use. That article gave me the name of my ideal job, and from then on my mantra was “I want to be an agricultural statistician’’ and my intention has been to improve agriculture using statistics.

My first job, after I left Newcastle University was in the Unit of Statistics in Edinburgh University. There were two experiences there that profoundly influenced my thinking . Very early on I read a paper and noticed it was incorrect, so I wrote a correction note for this paper and showed it to my director, Professor David Finney. The next morning David had changed my one-page correction note to give me a six-page draft paper, in blue biro for the parts he was confident of and in red for the parts that needed checking, and in capitals in red at the foot ‘ROBIN CANNOT WRITE’. Thenceforth I knew I needed someone to write my papers, I’ll do the algebra.

As Professor Frino has said my career is founded on REML. The key idea was Professor Desmond Patterson’s and I worked out a computational scheme to make it easier to estimate the parameters, and generalized the method.

Both these men freely shared their experience with me and I thought in the future if there was the opportunity I would try and help people. Fortunately the chance came in Edinburgh to do this Professor Bill Hill in the genetics department of Edinburgh University co-opted me to help him with the PhD students he attracted. He monitored the genetics and I assisted with the statistics.

I assisted with over twenty students from ten different countries (including one from Australia).

I find it rewarding to help people fly especially if they manage to fly higher than me! Some people might call this generosity, but I call it enlightened self-interest. I have had a more productive career through collaboration than if I solely developed things.

Talking about Australia, why should I be awarded an honorary degree in Australia ?

As Professor Frino said I have collaborated with Australian researchers and my most productive partnership has been with Professor Brian Cullis and Dr Arthur Gilmour. We developed an algorithm that made it feasible to efficiently estimate parameters in much bigger populations than before. Furthermore, we developed a computer program AS-REML that made use of this algorithm. The initial program was mostly written by Arthur Gilmour, who has enthusiastically supported many users of the program.

But Brian Cullis and his UOW colleagues realised the program needed extensive development to be user friendly ,well documented and could be incorporated into a modern computing environment.

The result, ASReml-R met my ambition of a computer program that could easily and efficiently transform data from plot and paddock to publication. ASReml and ASReml-R are widely used, especially in the animal and plant breeding sectors.

The last person I would like to mention is my partner of forty-nine years, Harriet MacKintosh. She has supported me enthusiastically throughout my career. But she also keeps be grounded. The publishers of the journal Professor Frino mentioned sent some copies to our house. Harriet opened the parcel and when I returned home she told me my magazines had arrived. Not a journal, a magazine! She enjoys directing plays and has spent a frustrating time trying to improve the content and delivery of this address.

What is my advice to graduates?

I had a dream and I followed it and I found it very satisfying it sustained me not only economically but intellectually as well.

You have overcome the challenges of Covid and your degrees show you have not only learnt extensive knowledge but you have learnt how to learn and how to do research. Use the fact that you have obtained your degree to give you confidence to do anything you wish. As someone said graduates can fly. But let’s be greedy.

I was fortunate to have wise counsel at the beginning of my career. Bill Hill and Brian Cullis and their students challenged me intellectually and Arthur Gilmour and Brian Cullis were focused and enthusiastic collaborators.
Recruit mentors and colleagues to help you fly even higher. Thank you