In a clean energy breakthrough, researchers from the University of Wollongong (UOW) and ARC Centre of Excellence for Electromaterials Science (ACES) have developed new electrolyser technology that brings cost-competitive renewable, or green, hydrogen closer to reality.

The research findings are published today (16 March 2022) in Nature Communications and report on the research team’s “capillary-fed electrolysis cell” and its production of green hydrogen from water at 98 per cent cell energy efficiency.

This productivity is superior to other existing electrolyser technologies, and is well above the International Renewable Energy Agency’s (IRENA) 2050 target, enabling an affordable hydrogen production cost that can match the production costs of fossil fuels.

Hysata is based at UOW’s Australian Institute for Innovative Materials (AIIM) – the headquarters for both IPRI and ACES – and is commercialising the technology with backing from IP Group and the Clean Energy Finance Corporation (CEFC).

“Electrolysers have been around for 200 years, however the large amounts of renewable electricity required to produce green hydrogen and the overall cost of electrolysers today has prevented large-scale uptake of green hydrogen,” said Professor Swiegers, who is the Chief Technology Officer at Hysata.

“Hysata’s overall electrolyser system has been designed for ease of manufacturing, scaling and installation, delivering 95 percent overall system efficiency, equivalent to 41.5 kWh/kg, compared to 75 percent or less for existing electrolyser technologies. For hydrogen producers, this will significantly reduce both the capital and operational costs to produce green hydrogen.

“Hysata is proud to be at the forefront of this technology innovation and introducing an entirely new category of electrolyser that is as monumental as the shift from the internal combustion engine to electric motors.”

Professor Wallace described his excitement on the discoveries and how it is a testament to work built upon over a long time.

“The Hysata development is no exception and we are proud to be associated with this.” 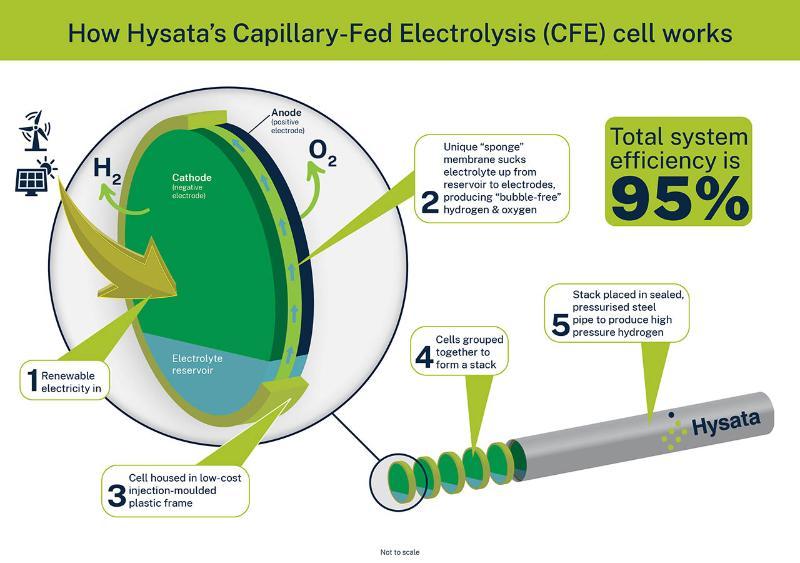 Paul Barrett, Head of Physical Sciences at IP Group Australia and Hysata CEO, explained that these new findings provide a pathway to commercialise the world’s most efficient electrolyser.

“The global momentum towards net zero is creating a massive opportunity for green hydrogen and electrolysers,” Mr Barrett said.

“Economics will ultimately determine which technologies win, and with our world-beating efficiency, Hysata is well placed to lead in this major new global market.

“Our technology will enable hydrogen production of below US$1.50/kg per kilogram by the mid-2020s, meeting Australian and global cost targets much earlier than generally expected. This is critical to making green hydrogen commercially viable and decarbonising hard-to-abate sectors.

“Hysata has some of Australia’s brightest minds working together to position Australia as a leading manufacturer and exporter of electrolysers, with plans underway to build a pilot electrolyser manufacturing plant and employ dozens of new highly skilled specialists in 2022.

“Green hydrogen is forecast to be a trillion-dollar industry with the backbone of this industry being the electrolyser. Given the urgency to reach net zero, we are gearing up to scale up as quickly as possible. The elegant design of our electrolyser is perfectly suited to mass production.”

ABOUT THE ARC CENTRE OF EXCELLENCE FOR ELECTROMATERIALS SCIENCE

Based at the University of Wollongong’s Innovation Campus, ACES is a multidisciplinary research group with a focus on developing functional devices for applications including batteries, solar cells and systems that interact with living tissue.

Sea urchins have invaded Tasmania and Victoria, but we can’t work out what to do with them Professor Alex Frino appointed to Royalties for Rejuvenation Fund body New ARC hub to turn the TIDE on offshore energy research
Close