The 2019-20 mega-fires were some of the worst in the world and in recorded history. 1.8 million hectares burned in high-severity fires during Australia’s Black Summer. The fire behaviour took even experienced firefighters by surprise.

The Australian Black Summer fires are now emblematic of the catastrophic harm wrought by climate change.

Exceptionally dry conditions and lack of soil moisture contributed to the intensity and longevity of the fire season. Similarly extreme wildfire seasons continue to unfold across the globe, including during 2021.

Emeritus Professor Ross Bradstock, former Director of the Centre for Environmental Risk Management of Bushfires (CERMB) at the University of Wollongong (UOW) and the NSW Bushfire Risk Management Research Hub, and Dr Rachael Nolan from the Hawkesbury Institute for the Environment at Western Sydney University, will deliver a keynote presentation at the Ecological Society Conference today (22 November), to pose the question The 2019-20 mega-fires: what did we learn and will it equip us for the future?

The presentation outlines causes, impacts and responses to the 2019-20 fires, which acutely affected forests and woodlands across the south east of the continent.

“We foreshadow the challenges and responses likely to be required if the 2019-20 season is a harbinger of the future across temperate, southern Australia. Overwhelmingly, these fires were due to extreme climatic circumstances,” Professor Bradstock said.

The management responses, including prescribed burns and suppression, proved partially effective in reducing fire severity and house loss, but such effects were constrained due to extreme weather conditions.

“The fires produced large carbon emissions, and exposed large areas of ecosystems and their constituent biodiversity to components of the fire regime that render them vulnerable to decline.”

Professor Bradstock is a global leader in bushfire research amid a rapidly changing climate.

In 2006, Professor Bradstock co-established CERMB a multi-disciplinary research team dedicated to the development of a quantitative understanding of risks posed by bushfires and how such risks may be mitigated through cost-effective management.

Professor Bradstock and Dr Nolan argue that the rate of change in fire risk delivered by climate change is outstripping the capacity of our ecological and social systems to adapt.

“Verification of the magnitude of potential impacts from shifting fire regimes is urgently required to understand how climate change and fire will reshape the structure and composition of the forests and woodlands of southern Australia,” Professor Bradstock said. 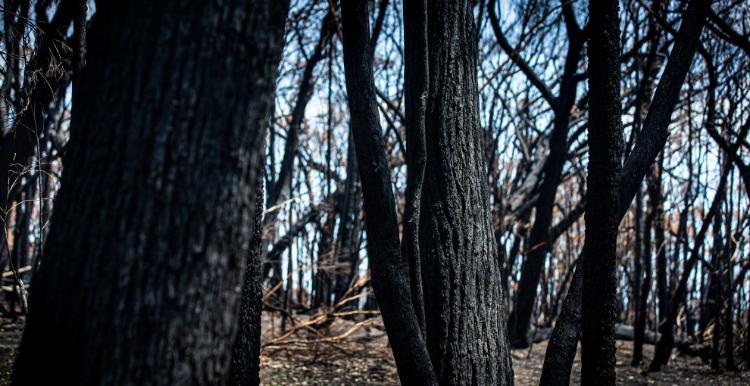 The charred remains of a forest following the bushfires that tore through the Shoalhaven. Photo: PAUL JONES

Professor Bradstock has worked extensively with government agencies and the community to help improve our understanding and capacity to coexist with fire. He has served as an expert witness at two Royal Commissions and led a major technical project that supported the NSW Independent Bushfire Inquiry during 2020.

Largely due to his efforts, UOW is now home to the most highly regarded bushfire research group in Australia.

The keynote presentation is part of the 61st Annual Conference of the Ecological Society of Australia (ESA). In 2021, the online ESA2021 conference theme is ‘Renewal’.