Vice-Chancellor honoured for promoting and supporting education and advancement

The Council for Advancement and Support of Education (CASE) has announced University of Wollongong (UOW) Vice-Chancellor Professor Paul Wellings CBE as recipient of the prestigious 2020 CASE Asia-Pacific Leadership Award.

The award, presented to Professor Wellings at an online event on Tuesday 18 May, recognises institutional leaders for their outstanding efforts in promoting and supporting education and advancement.

CASE President and CEO Ms Sue Cunningham said Professor Wellings was a long-term supporter of the advancement profession who had pioneered the role of advancement in tertiary education for newer universities, provided personal philanthropic support and supported policy structures at the national level.

UOW Chancellor Emeritus Jillian Broadbent AC, who nominated Professor Wellings for the award, said: “Professor Wellings has pioneered our advancement strategy to be as modern as it is innovative and effective. His dexterity to inspire and empower the Wollongong team has seen the University’s achievements and reputation increase in all major rankings, further progressing the University of Wollongong as a world-class institution under his tenure.”

Professor Wellings thanked CASE for the award and for the work it does globally to advance education.

“Being presented with the CASE Asia-Pacific Leadership Award is a real honour and one that I am immensely proud of,” Professor Wellings said.

“Alumni relations, philanthropy and community engagement have an increasingly important role to play in higher education globally, and are a key component of UOW’s strategic vision. Our advancement program has made significant contributions to the University’s achievements over the past 10 years.”

Widely regarded as one of Australia’s most influential university leaders, Professor Wellings has valued and supported alumni engagement throughout his 10 years at the helm of UOW.

He has actively engaged alumni in the life and mission of the University, placing great value on meeting UOW’s global alumni – who number more than 160,000, based in 156 countries – and has attended more than 70 alumni events across Australia and internationally.

As UOW Vice-Chancellor, Professor Wellings pioneered a number of key achievements to support communities through philanthropy and engagement. Under his leadership, the University raised $100 million in philanthropic funds, facilitating transformative outcomes, including:

In addition, Professor Wellings has led UOW’s efforts in community engagement and contribution. His standout achievements include spearheading a staff bushfire recovery campaign that raised more than $165,000 for the NSW Rural Fire Service; and supporting regional community initiatives, including as a board member of the Bundanon Trust.

In addition to shaping the University’s advancement program, Professor Wellings has also led by example. A dedicated philanthropist, Professor Wellings and his wife Dr Annette Wellings have been regular donors to UOW supporting among other things the Transforming Futures Scholarship Fund, which provides equity opportunities for students entering university. 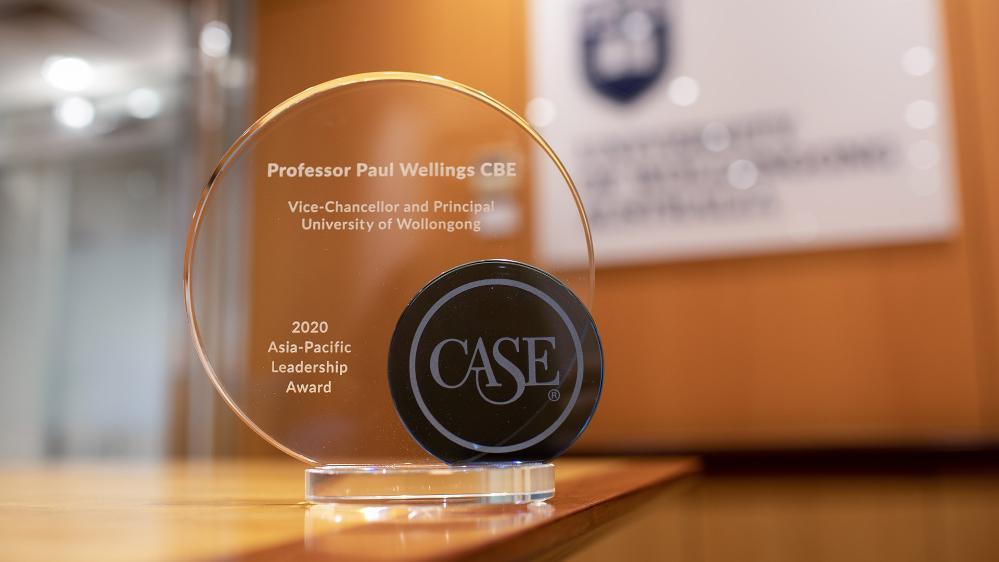 CASE believes in advancing education to transform lives and society. As a global non-profit membership association of educational institutions, CASE helps develop the communities of professional practice that build institutional resilience and success in challenging times. The communities include staff engaged in alumni relations, advancement services, communications, fundraising, government relations, marketing, and student recruitment. CASE is volunteer-led and uses the intellectual capital of senior practitioners to build capacity and capability across the world.