University of Wollongong (UOW) Emeritus Professor Martin Tsamenyi AM grew up in a rainforest in Ghana and only saw the ocean for the first time when he was 20 years old.

Since that first encounter he has spent most of his academic and professional life devoted to championing the sustainability and security of the oceans.

Professor Tsamenyi was recently conferred with an Honorary Doctorate of Law (Maritime Law) during a virtual graduation ceremony for Nelson Mandela University (NMU), which is based in Port Elizabeth, South Africa.

Professor Tsamenyi is the Former Director of the Australian National Centre for Ocean Resources and Security (ANCORS) at UOW and has been one of the University’s academic leaders for over a quarter of a century.

The honorary doctorate recognised his enduring passion for and contribution to global oceans law and policy, and his determination to create positive change.

“I do not believe that this honour has been given to me only in recognition of my past work, rather I see it as a wake-up call. A call to action to do more for humanity,” Professor Tsamenyi said in his acceptance speech during the virtual graduation ceremony.

Professor Tsamenyi’s life work has focused on the relationship between humankind and the sea.

“At the heart of the Blue Economy is stewardship of our ocean environment and its resources.  It includes improving human wellbeing, food security, and social equity through the sustainable management of our oceans,” Professor Tsamenyi said.

Professor Tsamenyi is an outstanding researcher and academic. He has taught, mentored and inspired countless numbers of students. He holds qualifications in law and international law from the University of Ghana and the Australian National University.

Beginning as a lecturer in Papua New Guinea, he moved on to the University of Tasmania where he became Dean of Law before joining the UOW as Professor of Law in 1993.

In recognition of his service to maritime and fisheries law and to legal education, Professor Tsamenyi was admitted as a Member of the Order of Australia in 2012.

In 2016, UOW bestowed on Professor Tsamenyi an Emeritus Professor title for his exceptional service and dedication to the University and his distinguished contribution to maritime and fisheries law in the Asia-Pacific region. 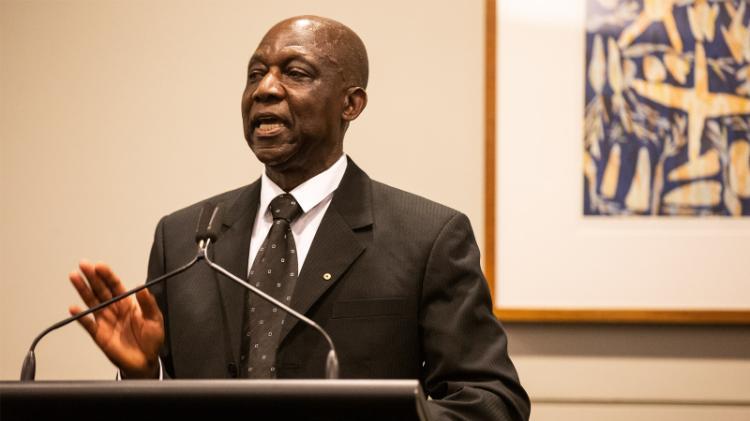 Professor Tsamenyi is a global authority in his field, offering leadership and expert advice.

“I have walked the corridors of power talking to Prime Ministers and Presidents, always holding my Bible, in my case, The United Nations Convention on the Law of the Sea, like a preacher spreading the gospel of a sustainable, peaceful and equitable ocean,” Professor Tsamenyi said.

He has made a major contribution to the success of Africa-wide initiatives in ocean science and sustainability.

Professor Tsamenyi warned that much more needed to be done to ensure the future of the Blue Economy globally.

“The long-term sustainability of the Blue Economy is now in doubt, as the world witnesses its constant abuse and degradation. Our oceans and seas have become garbage bins for large volumes of land-based waste,” Professor Tsamenyi said.

“Intellectual and political leadership is needed to restore dignity and direction for a sustainable Blue Economy.”

Throughout his acceptance speech he drew on the ideas and words of Nelson Mandela that continue to inspire him.

“I'm inspired again by Nelson Mandela who said ‘after climbing a great hill one only finds that there are many more hills to climb’,” Professor Tsamenyi said.

Under his guidance, ANCORS became Australia’s only multidisciplinary university-based centre dedicated to ocean law, maritime security, and marine resource management and the largest ocean law and policy research institute in the world.