Professor Fiona Wood’s accolades are immense and impressive. The list includes being honoured with a Member of the Order of Australia, recognised as an Australian National Living Treasure, named Australian of the Year, and a plethora of awards and prizes.

However, what truly sets Professor Wood apart is her empathy, kindness and dedication to using her incredible skills to help others.

These qualities are not necessarily a given for those at the top of their field, but for Professor Wood, one of the leading burns surgeons and researchers in the world, empathy and kindness go hand-in-hand with treating patients’ physical injuries.

On Thursday, during the University of Wollongong’s (UOW) virtual graduation ceremony, Professor Wood was awarded a Doctor of Science (honoris causa) for her services to medicine and medical research, especially burn surgery, as well as her impressive leadership and global humanitarian activities.

Accepting her award via Zoom from her home in Perth, Professor Wood spoke of the importance of education to the graduates. During her childhood in England, her parents were devoted to providing the best possible educational opportunities for their children.

“Education is fundamental. It makes dreams possible. My parents were hard-working, and they really instilled in our family the value of learning and being productive,” Professor Wood said.

Professor Wood’s life began in a small mining village in Yorkshire, the third  of four children. Since her mother believed that being a doctor would provide her daughter with financial security, she was focused on nurturing her education.

Surgery was a natural choice, yet it was an era in which women were not always seen as suitable for surgery. But, as Professor Wood told Dr Norman Swan in 2018, ‘It’s not a question of whether I’ll be a surgeon, it’s just where and when.’

She began her medical career at St Thomas’ Hospital in London, under the tutelage of Dr Bryan Mayou, a plastic surgeon who would become a lifelong inspiration and mentor to the young doctor. Professor Wood’s interest in burns medicine developed when she moved to the Queen Victoria Hospital, which had a dedicated burns unit. Thus began a lifelong interest in and pursuit of innovation in finding the best treatment for her burns patients.

“And my approach to people who told me that girls didn’t do that was that I was very good at needlework!”

Despite the intense schedule that a life devoted to medicine brings, Professor Wood did not choose between family and career. She is the mother of six children, a role that saw her become an inspiration to all working mothers, particularly in the field of medicine. However, the juggle of having children while undergoing her training in surgery, and then also while practising, was not always easy but she stayed motivated by her desire to make a difference in the world.

“My children are older now, so it is a lot easier than when they were all young! But my family has always been very supportive of my work and understands its value. It is about being organised and making sure I have time for everything, including my own wellbeing and exercise. Having such a great team of professionals around me in every area of my work also makes life easier. I don’t really see it as a juggle. When you love doing something, you somehow just make it all work.

Professor Wood’s role as Australia’s preeminent plastic surgeon in burns medicine was thrown into the national spotlight with two defining national events – the Bali Bombings in 2002 and the Garuda Flight crash in Indonesia in 2007. 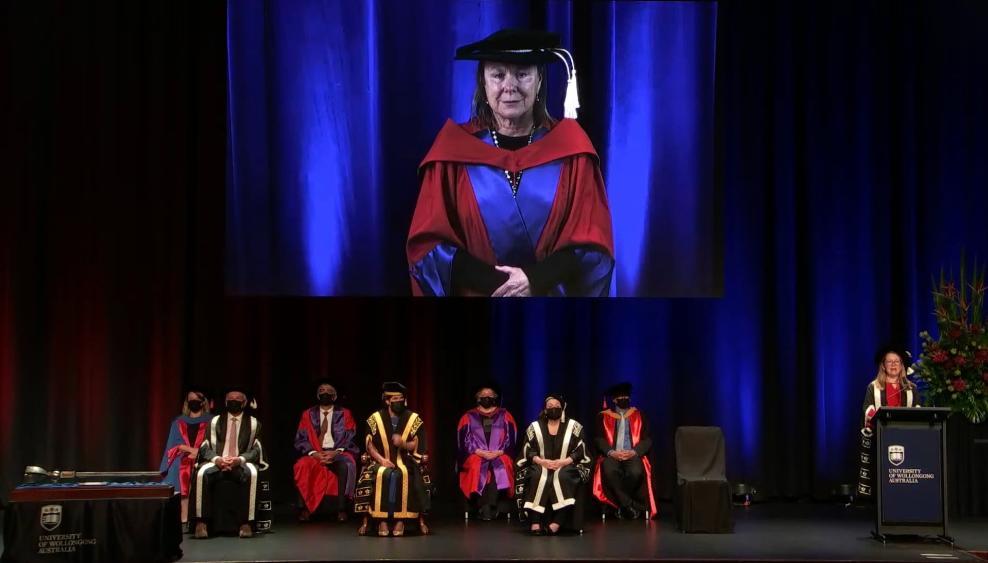 Professor Fiona Wood accepts her Doctor of Science during the UOW virtual graduation.

Professor Wood cared for many of the Australians injured in the Bali Bombings when three bombs exploded in the busy tourist spot of Kuta. They were flown to Royal Perth Hospital, where Professor Wood and her team spent weeks performing surgery, immersed in the care of 28 burns victims, who were suffering from burn and blast injuries , as well as infections and shock.

The team, led by Professor Wood, not only saved lives in the immediate aftermath of the bombings but improved the quality of life for the 25 survivors as they began to rebuild.

While it was a horrific time, Professor Wood said being busy and being of service helped to keep her going.

“I have tried to focus on the positives, the doing and trying to make things better,” she says. “My personal strategy is to learn from today to make tomorrow better.

“In burns treatment, the quality of the outcome has to be worth the pain of survival.”

In 2005, Professor Wood was named Australian of the Year for her work with the Bali Bombings patients. It was during that time that she used ‘spray-on skin’, her patented, world-first invention in which healthy cells are sprayed onto a burn wound.

A few years later, Professor Wood was once again on the frontline of caring for disaster victims when the Garuda Flight 200 crashed after overshooting the runway in Indonesia. On the ground in Indonesia, Professor Wood aided survivors of the crash with emergency burns treatment.

Being placed on the international stage as a result of these two tragedies has demonstrated Professor Wood’s resilience, strength and immense empathy to the world. At the same time, it has brought greater focus to the life-changing work that she has been undertaking for many years – to reduce the physical and psychological devastation caused by burns injuries.

She is the driving force behind the Fiona Wood Foundation, a not-for-profit organisation that uses research to drive better treatment for burns victims. It is difficult to put into words the immense impact that Professor Wood has had on the lives of her patients.

Professor Wood is also a champion of collaboration in research; she recognises that bringing expertise together is the key to better patient outcomes, greater innovation in burns treatment, and the translation of research into bedside treatment.

In 2019, Professor Wood visited the ARC Centre for Excellence in Materials Science at UOW to develop future collaboration possibilities on using bioprinting and bioinks to heal wounds.

Despite the extensive list of accolades and achievements to her name, according to Professor Wood, her greatest honour is not derived from her career. Instead, it is being a mother to her six children.

Juggling her intense and prolific career alongside a bustling family has, at times, been challenging, but Professor Wood has always done her best to put her children first.

“I am in awe of my kids and feel so lucky to have them in my life,” she says. “I can’t separate them out. They are a part of who I am.

“I believe the key to success has been understanding the need for hard work, and how that can be enormously fulfilling, but always keeping something of the best of you for those who care for you the most.”

As Professor Wood addressed the cohort of UOW graduates, her message was clear: “Find your passion and hang on to it.”