Team UOW hard at work in Dubai, racing to the finish line

A team of UOW students has spent the past two weeks in Dubai putting together their world-class sustainable house to meet the deadline for the Solar Decathlon Middle East 2018, an international design and construction competition that focuses on sustainability.

The official ceremony for the competition takes place today (14 November), to be attended by members of the royal families of the United Arab Emirates.

The Solar Decathlon Middle East 2018 is dubbed the “energy Olympics”, where 15 teams from 11 countries have designed and built sustainable homes that compete across 10 contests, from architecture to sustainability, with the added challenge of coming up with a design that is functional and suited to the desert heat.

Team UOW Australia-Dubai comprises more than 40 students from the University of Wollongong and TAFE NSW, who have spent the past two years designing, prototyping and building a design that addresses not only the competition needs, but also caters for the needs of an ageing population, supporting people living with dementia and other age-related disabilities.

Their house, named the Desert Rose after a flower that thrives in arid conditions, was completed for the 12 November construction deadline, the culmination of a massive logistical and construction effort to ship the house in modules from Australia and re-assembled in the desert heat at the Mohammed bin Rashid Al Maktoum Solar Park, about 50 kilometres from Dubai. 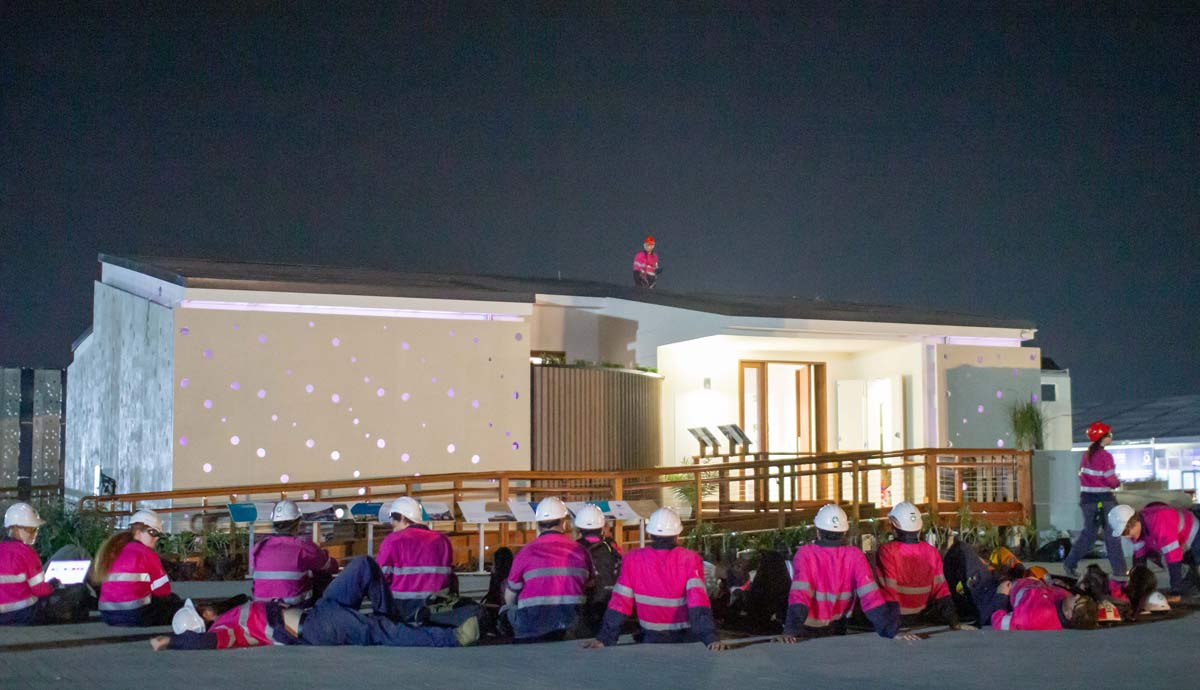 Members of Team UOW Australia-Dubai admire their hard work after two weeks of construction in Dubai.

Project Manager and UOW PhD student Clayton McDowell said that despite the challenging conditions in the desert, the team had banded together to show the world what Australia can do.

“With construction finished the Desert Rose is blossoming in this Dubai heat and we are extremely proud to be representing Australia,” Mr McDowell said.

“Over the next few days we will continue to tune the house so that we are able to squeeze the maximum performance out of it in preparation for the 10 days of measured contests.

“We are also excited to be touring the first people through our Desert Rose and showcase our Australian innovations. Right now, the team is tired but we are riding a high after being awarded 10 bonus points for finishing construction in under 15 days.”

After the Official Opening Ceremony today, all 15 houses will be open for public touring for two weeks. During this time, it is expected the event will host close to 2000 people each day.

Aside from the visitors, houses are also toured by a variety of judges, who have expertise in the 10 contest areas of the competition.

The judges will be responsible for handing out scores to all teams at certain points during the two weeks.

A winner of the competition will be the house that scores the most points out of the available 1000.

The winners of each individual contest will be announced throughout the two weeks, with an overall competition winner announced at the Final Award Ceremony to be held on the 28 November.

UOW Executive Dean of Engineering and Information Sciences Professor Valerie Linton said the team had demonstrated passion, commitment and professionalism in getting the house to the competition.

“The team has had a community of supporters, including their sponsors, along the way and the Desert Rose house has brought significant innovation and education to the wider community on how housing design can help support people living with dementia and the environment.”

UOW Vice-Chancellor Professor Paul Wellings CBE said the students had demonstrated the type of innovative thinking, tenacity and global outlook that is part of a UOW education.

“This is a huge achievement and I congratulate the students on their hard work and dedication. I wish them all the best for the competition as they represent themselves, UOW and Australia on a global stage.

“The Desert Rose will have a lasting legacy in demonstrating that it is possible to build homes that are affordable, comfortable and sustainable while addressing the complex needs of an ageing population.

"These students are leading the way in developing solutions for critical health and wellbeing challenges we face as a society.”

UOW has a long association with Dubai, having recently celebrated the 25th anniversary of the University of Wollongong in Dubai (UOWD), which is now a thriving university of 3,600 students and more than 10,000 alumni.

In 1999 UOWD became the first foreign university to receive a licence from the UAE’s Ministry of Higher Education and Scientific Research, enabling it to provide accredited courses for Emirati Government Departments, which has since become an integral part of the operation.

Green light for 100 per cent renewable power The 2019-20 mega-fires: what did we learn and will it equip us for the future? Invasive species are threatening Antarctica’s fragile ecosystems as human activity grows and the world warms
Close