Next time you turn to your favourite smartphone map for directions, or send your location to a friend, pause and thank Kurt Lambeck’s thirst for knowledge.

Emeritus Professor Kurt Lambeck AO has revealed how our planet changes shape—every second, every day, and over millennia. These changes influence sea levels, the movement of continents, and the orbits of satellites.

Professor Lambeck’s original work in the 1960s enabled accurate planning of space missions. It led him to use the deformation of continents during the ice ages to study changes deep in the mantle of the planet.

It also led to a better understanding of the impact of sea level changes on human civilisation in the past, present and future.

Today’s highly accurate GPS-based systems build on his work and enable precision agriculture, new ways to explore for minerals, and the navigation tools we all use in our smartphones.

“The Earth is remarkable,” Professor Lambeck said. “It has this wonderful record of its history going back to almost its very beginning.

"Almost everywhere you look, you learn something new about what’s been going on in our planet. It’s a constant journey of discovery.”

Professor Lambeck was born in the Netherlands and came to Australia with his parents in a converted troop ship as displaced persons after World War II.

His parents were Dutch Resistance fighters who would become part of the diverse and vibrant fabric of Wollongong and surrounds.

The family settled in Wollongong where he attended Dapto Primary School and Wollongong High School.

“I was fortunate at the time that Wollongong had a selective high school and that gave me a solid background in maths, physics, chemistry, English and so on.

"I really had no idea what I wanted to do after high school and there was no university here in those days.

“In those days you had two options, a job at the steelworks or leave the area. I tried the first and didn’t like it.”

A scholarship from the NSW Government allowed him to study a Bachelor of Surveying at UNSW, graduating in 1963.

“That enabled me to go to university otherwise I probably wouldn’t never have been able to and never developed a taste for learning.

"I realised there were so many things that I wanted to know or understand and that knowledge wasn’t served up on a plate.”

He followed his curiosity for geophysics and competed a PhD at Oxford University in space geodesy—precise measurement of the Earth using satellites. It was 1967 and humankind was rushing into space.

Professor Lambeck’s work with the Earth’s gravity field enabled the development of better gravity field models that were vital in determining the trajectories of satellites, and were needed to navigate to the moon and beyond.

The research revealed that changes in the planet’s gravity field were directly related to plate tectonics, the movements of continents on the Earth’s surface, and that the continents are still rebounding from stress and deformity caused during the ice age.

Parts of Sweden, for example, are rising at a metre a century, while southern England is sinking by 5 centimetres a century.

By measuring change over millions of years, thousands of years, and from day to day, Professor Lambeck and his colleagues can generate the best possible predictions of future sea levels so governments can plan for a changing future. 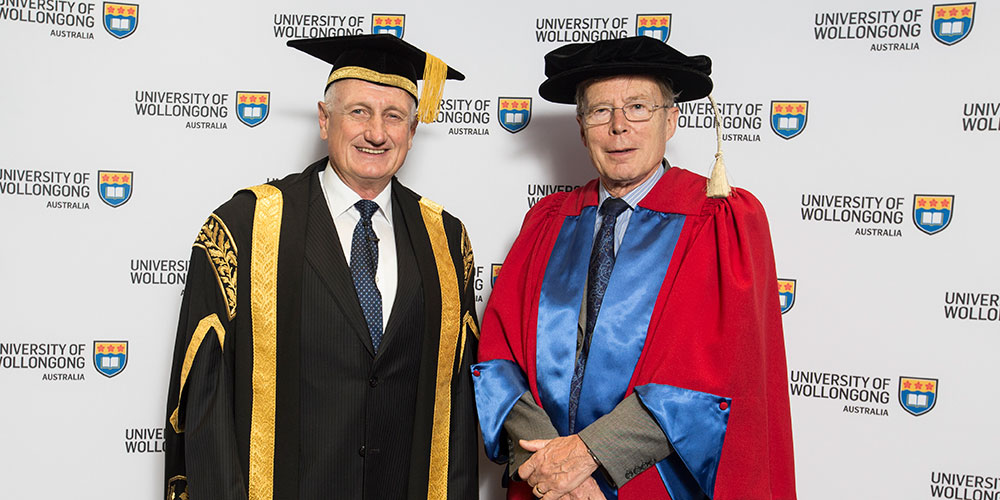 His ideas have also seeded technological innovations used every day. In Australia, he guided the development of the AuScope network, a comprehensive geodetic monitoring system.

"The network consists of about 100 GPS stations, radio telescopes, and laser tracking systems, and enables location tracking with sub-centimetre accuracy across the country.

“Today we can see the breathing of the Australian continent on a daily basis,” Professor Lambeck said. “We can watch the land rise and fall with the tides and observe the straining of the old continent as it collides with Southeast Asia.

“We can detect subtle variations in gravity that could indicate not only deep mineral deposits but also changes in groundwater through time.”

Professor Lambeck has received more than 30 international awards and distinctions and served as President of the Australian Academy of Science from 2006 to 2010.

For his distinguished contribution to the earth sciences, his significant service at the international level and his outstanding leadership, UOW awarded Emeritus Professor Kurt Lambeck AO an Honorary Doctor of Science (honoris causa) on 17 December 2015.

Professor Lambeck has had an association with the University of Wollongong since 1998 when he was a Distinguished Visiting Researcher in the former Quaternary Environments Research Centre (now GeoQuest Research Centre), and since that time has engaged with researchers on aspects of long-term sea-level changes and coastal evolution.

“Every time I drive down the escarpment and I see the plains and the coastline and think, what a wonderful landscape. I’m impressed by what UOW has achieved in its history.”

Professor Colin Murray-Wallace from UOW’s School of Earth and Environmental Sciences said: “Professor Kurt Lambeck has made an outstanding contribution to geophysics and geodesy, the science concerned with the size and shape of the Earth and the behaviour of the Earth’s crust.

“His research has clearly articulated the geophysical basis for the behaviour of the Earth’s crust, and has provided coherent explanations as to why different geographical regions have experienced contrasting relative sea-level histories over the past 2 million years.

“His research has greatly enhanced the understanding of the nuances of long-term sea-level and climate changes, and is of direct benefit for quantifying rates of present sea-level changes.

“Professor Lambeck’s research has also contributed to understanding the longer-term evolution of the Earth’s crust. He has published prolifically and his research contributions have greatly influenced many researchers globally. This award is particularly well-deserved.”

For transforming understanding of the living planet, Professor Lambeck received the $250,000 Prime Minister’s Prize for Science. He is an Emeritus Professor at the Australian National University in Canberra.

Read about and watch videos on all seven Prime Minister’s Prizes for Science at science.gov.au/pmscienceprizes