At an age when most teenagers are just beginning their tertiary studies, Jacob Bradd is donning his blue gown and cap for graduation.

Only weeks after he turned 19, Jacob has completed a Bachelor of Advanced Mathematics (Honours). It was a journey he started at the age of 13, when he became the youngest full-time undergraduate student in the University of Wollongong’s history.

It is an incredible achievement for Jacob, who said he is happy to have reached the end of his degree.

“I am really stoked to be graduating, and my parents are over the moon that I’ve received first-class honours,” he said.

Jacob has always been captivated by mathematics. But when he was a young boy, he admits that his parents were concerned that he was delayed in his learning.

“My mum is a speech pathologist, and when I was about four, she was worried that my speech and my skills were behind,” Jacob said. “So my dad [a hydrologist and Honorary Fellow at UOW's School of Earth and Environmental Science] took a year off work with the aim of getting me up to speed.

"He taught me about basic maths, and I remember he said, ‘I’ll teach you addition, and then when you understand that, we will learn subtraction.’ I woke up the next day, and I knew how to add, so I said ‘I’m ready for subtraction’, and that’s how we continued, with multiplication, division, learning all the basics.”

It was soon evident that Jacob was an extraordinary child. In Year 5, he was reading Year 8 level books. And by the time he reached the age of 13, he was ready to study subjects at University. He moved from Year 9 into full-time tertiary study, skipping grades 10, 11, and 12. 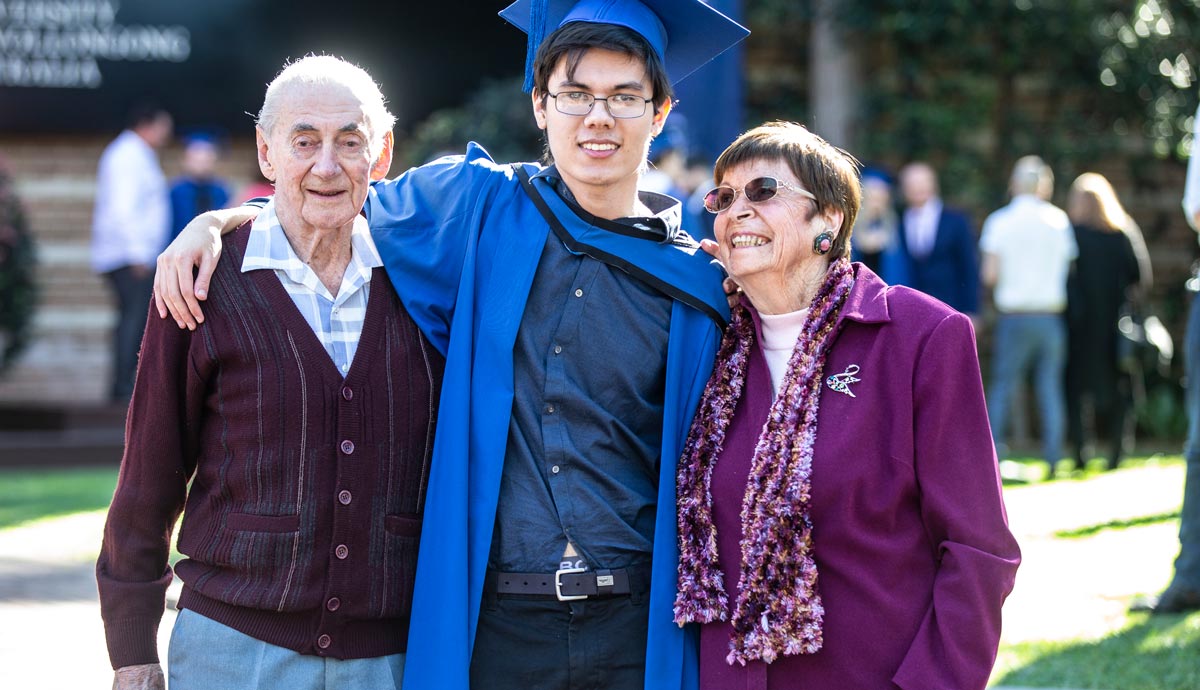 Jacob with his grandparents on his graduation day.

Jacob said it was hard to adjust at first but studying at UOW has been an incredible experience and has changed the way he learns.

“It has really challenged me to think more logically, to use that side of my brain. Studying maths at school is really different to studying maths at university,” he said. “But it has been a great experience, and the lecturers have been awesome.”

Jacob, who said he loves the “pure history” and patterns of modern mathematics, is now bound for the United States, where he will study his PhD at Pennsylvania State University.

He is excited about the opportunity to study under world-class lecturers – the reason he chose Penn State – and explore some new subjects as part of graduate school. He is also looking forward to putting his passport to use.

“In the US, you have to spend a year at graduate school doing lots of different subjects, to ensure you’re well-rounded, before choosing your thesis topic, so I’m looking forward to that, because I’m interested in lots of different things. I can’t wait to see a bit more of the world, and hopefully get to travel in Europe.”