How a family connection to Lake Conjola inspired Christopher to provide accommodation for bushfire affected wildlife. 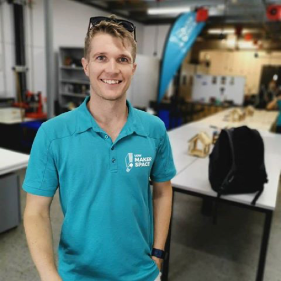 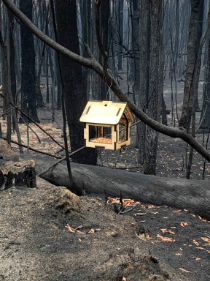 UOW PhD student Christopher Richards, with the help of the Wollongong community, created laser-cut bird feeders at the UOW Makerspace located at the Innovation Campus.

Christopher Richards grew up down the coast in Ulladulla and has lived in Wollongong for the past 10 years. Christopher holds a Bachelor in Nanotechnology and is currently finishing his PhD in Biomechanics and Engineering.

“My PhD supervisor encouraged me to get involved with the Makerspace.”

Christopher enjoys using the Makerspace to work on his academic work and have fun. “What drew me to the Makerspace was the openness of the selection of tools, equipment and expertise they have there. I use it for a bit of research, but I also do play around in there.”

“It’s less of a workshop and more of a playground for an engineer which is great.”, he said.

Christopher was personally affected by the 2019/2020 bushfire season and the Makerspace’s facilities inspired him to create wooden bird feeders.

Chris’s family were heavily impacted by the fires in Lake Conjola and noticed the birdlife were struggling in the days following the fires, with all their food burnt out and their homes lost.

Christopher then returned to Wollongong and made some bird feeders in the Makerspace with the plywood and laser cutter available which drew attention from the locals.

Christopher praised the Makerspace’s ability and acknowledged its uniqueness.

“They have this capability no one else in the region has.”

Using the Makerspace facilities, Chris and the team of volunteer helpers quickly created custom designs and implemented them. A week after starting the project a workshop was organised where members of the community where able to come in and piece all the pre-cut pieces of wood together to construct the bird feeders.

Christopher distributed some designs to Wildlife Australia and another Sydney wildlife group who monitored the bird feeders using cameras with the community providing observations on what the birds were feeding on and what food they were attracted to.

“After that we made a few little design changes because after the fires the smalls birds hanged around because they can’t fly as far as the bigger birds like the cockatoos and kookaburras.”

When the larger species birds returned Chris and team found they didn’t fit into the bird feeders like the smaller birds which inspired the creation of larger bird feeders.

“We hosted another workshop and knocked together another 60 bird feeders, went down there and distributed them again and kept track,” he said.

“It was a pretty personal project of mine.”

At the time, the community in Wollongong were desperate for a way to help people and wildlife down the coast and creating bird feeders gave the locals a sense of achievement. This was followed by a large influx of donations, clothes, toys, and food to the Lake Conjola community, making them feel overwhelmed with support.

The bird feeder project helped the Wollongong community fulfil their desire to help the fire-burnt community with even the children getting involved and sending messages of support on the bird feeders.

“When the feeders got down there it was accepted quite wholeheartedly and it was an emotional experience to see people not only caring about humans but also the wildlife which is a huge part of life down at Conjola.”

Christopher said the equipment, community reach, access to professionals and experts all made the laser-cut bird feeder project a success, with Bunnings donating the plywood.

“The people at the Makerspace, the sense of community, the motivation that you see spark in someone’s eyes when their making things, it broadens the horizons of what people can make. I love that.”