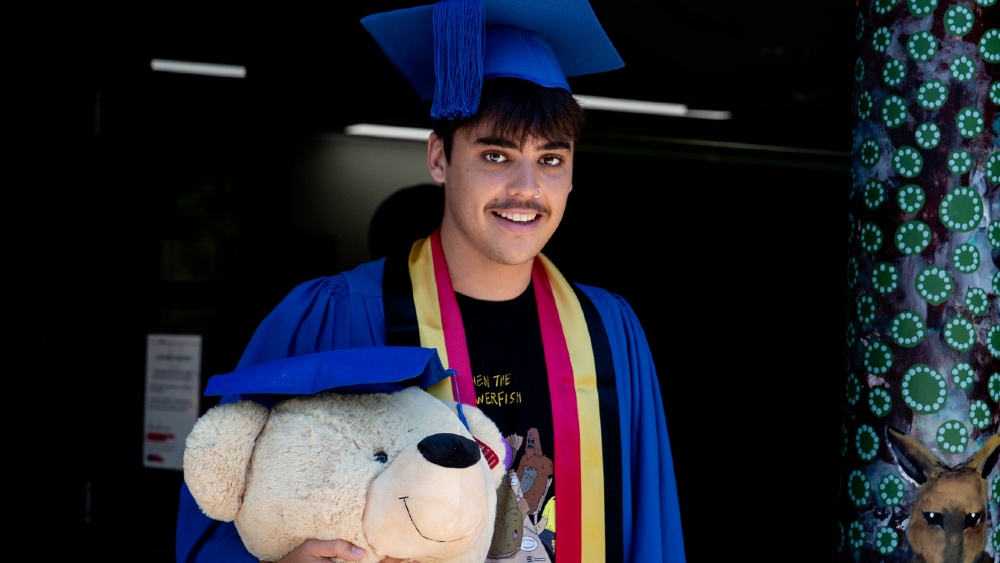 When you’re studying to become a doctor, there’s not much spare time to commit to part-time work.

The intense study schedule means employment is often impossible and the financial constraints of living on a student allowance are exacerbated.

So, when Harison Towns found out he’d been awarded the Dr Krish & S. Reddy Indigenous Medical Scholarship in 2021 he realised he could now fulfil his dream of becoming a doctor with one less challenge.

The Dr Krish & S. Reddy scholarship is awarded each year to an Indigenous student in the UOW Graduate School of Medicine and provides a stipend of $25,000 each year for the duration of the four-year program.

Harison was also fortunate to receive one of 10 School of Medicine scholarships for Indigenous students worth between $2,000 and $10,000 when he started his post-graduate study in 2021.

“The scholarships have alleviated the financial stress you are under when you are a student,” Harison said.

“It’s also alleviated a lot of other stressors like the psychological stress of not having to worry about the day-to-day living expenses, especially in the current climate of rising inflation and cost of living.

“As a medical student I don’t really have the time to go out and look for a part-time job because of the amount of study we are required to do, and the scholarships mean I can now focus on my academic studies as well as broadening my experience to develop myself as an individual.

“It has also allowed me to accelerate my medical learning because I can also now afford more medical education resources. I don’t have to worry about the costs associated with getting those resources.”

Harison is a Gunggari man (Southwest Queensland) but spent most of his childhood in South Sydney on Dharawal land.

Harison drew a lot of inspiration from his mother. Her work as a Registered Nurse at some of Sydney’s biggest trauma hospitals sparked an interest in health and medicine in the young Harison and nearly 20 years on he is fulfilling his dream of becoming a doctor.

“She would always share stories about her work, and I always felt touched by them, hoping one day I could do something similar”

“I guess I have always had a caring, nurturing type of nature and I liked the idea of helping people and being able to make a difference in people’s lives,” he said.

As a teenager, Harison’s interest in health sciences grew, and when it came time to choose a profession he decided to apply for the Bachelor of Medical Science at the University of Wollongong.

He also had the opportunity to join the NSW Rural Doctors for a brief study experience and said it opened his eyes to the dire needs of Indigenous healthcare in Australia.

“We visited such places as Tamworth, Brewarrina, Nyngan, Walgett, Bourke and Dubbo. I had some insightful and meaningful conversations with the mob out there and I felt a massive call to action over the health inequities faced by Indigenous communities. I wanted to be a catalyst for change.

“I knew I wanted to go into something that was in the medical profession but I wasn’t clear what,” he said.

“I started doing the pre-med program which allowed me to then choose in my second year a direction into the medical field. I chose to major in medical science which was more about the foundational sciences of medicine.”

When he applied for the graduate medical program at UOW, Harison said it helped him realise his career goals were much more attainable. He is one of only two Indigenous medical students in his cohort.

Harison said he always knew studying medicine was going to be hard work and he’s learned a lot about himself over the past 20 months.

“I knew the workload was going to be immense and it is my nature to push myself harder,” he said.

“But I have learned that I also need to take care of my own mental health. I’ve realised this is a marathon, not a sprint. With burnout being so prevalent in the medical field, I am taking it one step at a time”.

“I’m not sure of which direction I want to head when I’m finished. At the moment I am doing a rotation in mental health and I’m liking psychiatry, but I have two more years to decide what I want to specialise in.

“I have in the back of my mind that I won’t commit to anything now because it could close my mind to trying other areas. I want to stay open-minded and be open to everything and engage as much as I can with each rotation.

“Medicine is so rewarding, and I believe it has the highest job satisfaction. It isn’t all sunshine and rainbows though; it requires a lot of hard work.

“I hope that my experiences can inspire somebody somewhere, in particular, us blackfellas who are so desperately needed in the health sector.”