Unlocking the power of learning 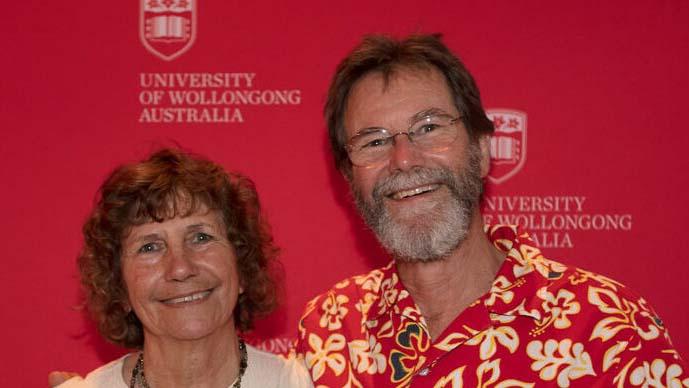 When Jean Clarke and Jack Baker first met at UOW UniBar in 1982, it was a convergence of two inquiring minds and a shared relationship with the University set to endure for years to come.

Clarke’s connection with UOW began in 1978 when she commenced a Bachelor of Arts and Diploma of Education. Arriving in Australia in the mid-1960s as a wife and mother, she had no intention of pursuing tertiary studies. In the mid-70s, she was working in the first women’s refuge established outside Sydney with women from the mothers’ club of a local public school when the nation’s educational doors were flung open.

“In my 30s, I decided I needed a university education to pursue a career and be an independent woman,” Clarke recalls. “It was during the Whitlam era, when women were encouraged and supported to further their education and university degrees were free for everyone.”

Applying as a mature-age student, to her surprise Clarke was accepted into a teaching degree. She eagerly embraced the opportunity, immersing herself in campus life and playing her part in the burgeoning cultural shift.

“There was some initial resistance among academics, but soon came the realisation that most women were high achievers and their experiences added a new dimension to university life. I joined with other female students to establish a Women’s Room on campus to provide friendship, support and an understanding of feminist politics, and enrolled in the inaugural Women in Society subject taught by a group of female academics. This validated my emerging feminism, and I have never wavered from these values.”

Clarke graduated in 1982, becoming a Senior Head Teacher in Access and Equity at Illawarra TAFE. She spent the next 20 years creating education and employment pathways for disadvantaged groups, primarily women. She actively promoted Women-in-Trades and opportunities for women to study and work in non-traditional fields, and empowered women to overcome the barriers of lack of schooling, language and childcare to realise their potential.

In particular, Clarke has been a tireless advocate for addressing the vast opportunity gap faced by Australia’s Indigenous women. She met Monaro Ngarigo woman and Elder Aunty Iris White, who from the early 1980s would become a valued mentor, friend and partner in developing equity programs.

“I believe lifelong learning should be accessible to everyone, everywhere – locally and globally. It can provide people with opportunities to improve the quality of their life together with personal satisfaction in achievement.”

Clarke retired from TAFE in 2000, and for the next 20 years volunteered at the Janet Cosh Herbarium in Biological Sciences. During this time, she also worked alongside Baker as a research assistant related to the conservation of endangered birds, and made significant contributions to two projects funded by UOW Community Engagement Grants Scheme.

Baker’s connection to UOW came much earlier in life. He was just 17 when he commenced a Bachelor of Science at Wollongong University College. Graduating in 1973, he launched what was to become a distinguished career in education, teaching at the Illawarra Grammar School and Wollongong TAFE and as a Warden at the Barren Grounds Bird Observatory and Field Study Centre. He returned to UOW to complete his PhD, graduating in 1999 having dedicated his thesis and subsequent focus to advancing conservation of the endangered Eastern Bristlebird and the Ground Parrot.

Over three decades, Baker has made an immense contribution to threatened species and environmental conservation as a researcher and educator, and in key appointments with NSW’s Office of Environment and Heritage and Department of Conservation. Alongside a proud scientific publication record in top-rated peer-reviewed journals, he has supervised countless students and forged crucial collaborations between governments and the University. In 2005, he played a decisive role in establishing and securing ongoing funding for UOW’s world-leading Centre for Environmental Risk Management of Bushfires.

Baker was appointed Honorary Principal Fellow in the Institute for Conservation Biology and Environmental Management on his retirement in 2008. His university qualifications have been much more than a ticket to a rewarding career in teaching, research and public service.

“In addition to valuable subject content and being immersed in a culture of academia, I learned to think, analyse, question and write,” says Baker. “To be able to express myself as a critical thinker has been my greatest achievement.”

Baker and Clarke – honoured as Fellows of the University in 2013 and 2007 respectively – were each the first in their families to attend university. Today, the lifelong love of learning is intergenerational, as is the connection with UOW: one of their children completed a Bachelor of Arts at the University, while two of their grandchildren are proud alumni and students. 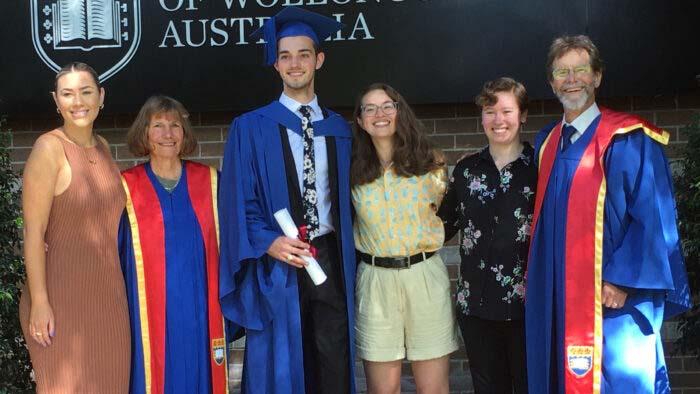 “Koko will complete a Bachelor of Arts/Bachelor of International Studies in 2021, and Finn graduated last year with distinction in his Bachelor of Science in Chemistry. He now works in a graduate position with the Australian Government Department of Health,” says the proud grandmother.

Since 2014, seeking to offer equitable access to the transformational gift of education and career pathways, Clarke has endowed the UOW Australian Indigenous Women’s Scholarship. Each year, it provides $10,000 to a female Aboriginal or Torres Strait Islander undergraduate student in science, medicine, health, engineering or information sciences.

Building on a long commitment to equity and enduring links with the Woolyungah Indigenous Centre, Clarke says the scholarship was inspired by the couple’s experience with a young NSW South Coast Aboriginal woman, Jade, who lived with them for six months in 2008 while studying engineering at UOW.

“I was shocked by the difficulty Jade was having securing any kind of financial assistance from the university, particularly as she was one of just a few women studying engineering at the time,” Clarke says.

“This was a key impetus behind the scholarship and broadened our knowledge of the opportunity inequities for women in non-traditional areas at UOW. I’m honoured by my long association with Woolyungah and its role in supporting women in their personal journeys and educational pathways. It has been a great pleasure meeting the recipients and hearing about their goals and aspirations.”