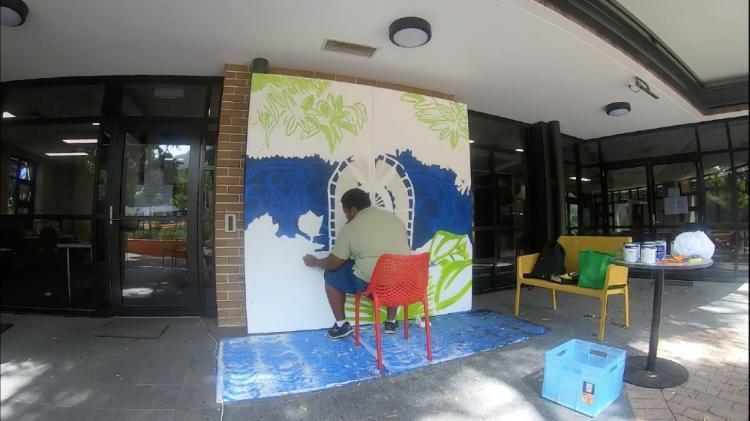 Harry Pitt has been working on a new artwork here at WIC that resembles an interpretation of the Torres Strait Islander flag.

This artwork is an amalgamation of his own heritage, the Illawarra Harry Pitt has been working on a new artwork here at WIC that resembles an interpretation of the Torres Strait Islander Flag. and is inspired by his uncle Meli Pitt, for without him, Harry wouldn’t have come to share his story in Wollongong.

“The green on the top and the bottom is a representation of the land, the blue is the ocean and the waves, the black in between are the people and the white represents peace”.

He also mentioned that each corner of the artwork is a representation of the four different seasons. The different seasons flowing into one another signifies the change of Summer to Autumn,  Winter and to Spring. He has also included both local and Indigenous plants that symbolise the two cultures, Australia and Torres Strait to create a unity.

The centrepiece of the mural symbolises his uncles Dhari, which is a traditional head piece that represents the innovation of Torres Strait Islanders as they adapted through Western civilization.

The Dhari in modern day life is used as an opportunity for Torres Strait Islanders to tell their stories, This resonates with WIC’s core goals as Harry is able to create his cultural significance through a form of art in a safe and proud environment. This is his story for all and we are proud to show it off here at WIC where we are all about letting Indigenous students shine through their culture.

His artwork will be launching soon here at WIC, so be sure to check out all of his deadly progress through the time-lapse video below, and more on his Instagram page @harrypitt_artist.

We will post Harry’s full video once completed on our social media.