You are here More Pages
Research

Research projects under this theme focus on conditions that significantly contribute to the inequities in the health status between First Peoples and the non-Indigenous population.

Our research contribute to building the evidence around actions needed to ensure that Indigenous children, youth, men, women and older people enjoy good health and wellbeing throughout their lives. 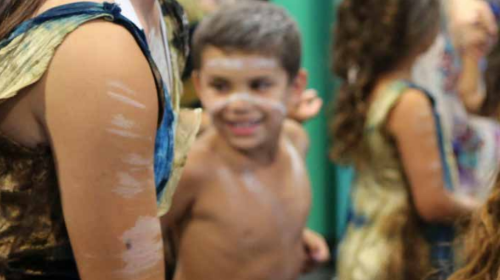 Evidence for action to improve the health of urban Aboriginal children and adolescents: the SEARCH study

The project builds on the SEARCH cohort study of > 1,600 children and their families based on a long-standing Aboriginal Community Controlled health sector and research partnership. The project aims to improve urban Aboriginal child and adolescent health by using data from participants to identify opportunities for intervention and developing data-driven multicomponent interventions to improve health services.

Burns in children can be a devastating injury, causing life-long scarring, severe psychological trauma and loss of function in multiple domains. Aboriginal and Torres Strait islander children experience burns at least double the rate of other children.

Having consistent access to high quality care is fundamental to good outcomes in burns care. There are well documented barriers to access to both tertiary and primary healthcare for Aboriginal and Torres Strait Islander people in both urban and rural/remote settings. However, despite the significant burden of burn injury, to date there has been no work that examines care received, or its impact on outcomes in Aboriginal and Torres Strait Islander children.

This study followed a group of Aboriginal and Torres Strait Islander children in four states – New South Wales, Queensland, South Australia and the Northern Territory – who went to a tertiary burn unit following a burn injury. We examined care received (including cost), described the relationship between care and functional outcome, and identified barriers and facilitators to receipt of appropriate, ongoing care.

This research allowed us to work with clinicians, policy makers and community to develop a ‘blueprint’ for reform of services, to ensure Aboriginal children receive appropriate and cost-effective care, and inform service delivery and future programs.

Healthy Hearts: the development and evaluation of an outreach, family centred model of cardiac rehabilitation for Aboriginal people

Aboriginal Australians are twice as likely to have a heart attack as other Australians and more than 10 times as likely to die from coronary heart disease. Cardiovascular disease also strikes Indigenous Australians much earlier, with more than 20% of 35 to 44-year-olds already afflicted, figures show. There is a particularly high incidence around the Shoalhaven region of NSW. This feasibility study is developing and evaluating a family-centred outreach model for cardiac rehabilitation in the Aboriginal community.

Working in partnership with the Illawarra Shoalhaven Local Health District, Ngarruwan Ngadju are providing academic leadership, and providing project support, including undertaking qualitative data collection, analysis and report writing. Assistance is also being provided in the preparation of intervention materials and the administration of questionnaires.

Currently the two-year feasibility study is based in the Illawarra and Shoalhaven region, but results are expected in mid-2021 and the program may be rolled out statewide if it proves to be a success in reducing hospital readmissions and saving lives.

Australia’s Aboriginal and Torres Strait Islander population is ageing: in 1991, Aboriginal people aged 55 years and over accounted for only 6% of Australia’s total Aboriginal population and this proportion is predicted to double to 12% by 2021, with resulting increases in ageing conditions such as falls. This large scale trial in NSW, SA and WA will test the effectiveness of a community based program in reducing falls and improving function in older Aboriginal people.

The project was named after the Ironbark tree because it is native to Australia, evokes images of old, strong, trees standing tall and that is what we want to see our old people doing. Standing tall and strong as they age. The Ironbark Study is comparing two different programs aimed at improving health and wellbeing of older Aboriginal people. Both involve an ongoing program delivered weekly by a local person, in a community setting. The Ironbark: Standing Strong program is a weekly exercise and discussion program, and the Ironbark: Healthy Community program is a weekly program that involves discussions and social activities.

The study plans to recruit 60 Aboriginal community or health services in NSW, Western Australia and South Australia into the Ironbark Trial. Services participating in the study are randomly assigned to either receiving the Ironbark: Standing Strong program or the Ironbark: Healthy Community program. Both programs aim to improve the health and wellbeing of older Aboriginal people. At the end of the trial, sites that delivered the Ironbark: Healthy Community program will have the opportunity to deliver the Ironbark: Standing Strong program for a further 6 months, including all resources and equipment needed.

Ngarruwan Ngadju researchers participate in the Ironbark study on the chief investigator team, the Aboriginal governance committee and in the engagement and recruitment of sites in south-eastern NSW. From late 2019 members of the team commenced discussions with Aboriginal organisations in the region to inform them of the study, its benefits for community, and to ascertain their interest and capacity to be involved as study sites for the trial. This work is ongoing and a number of sites are expected to commence the program in mid-2020.

Walking the journey of dementia: an Indigenous community study

A participatory action research (PAR) approach has been adopted as the research design working with local Aboriginal and Torres Strait Islander people which will give local people a voice and help facilitate self-empowerment in regards to dementia. Through the protocols of reciprocity, this study will give back to the community an important resource that will provide access to dementia knowledge and dementia education. Participatory action research will also be used through an ‘Aboriginal Lens’ to justify and reflect on Aboriginal epistemologies (ways of knowing), axiologies (ways of doing) and ontologies (ways of being) supporting the students' worldview throughout the study. The research tools used will include: focus groups, workshops, participant observations, and yarning circles. Concurrent data collection and data analysis will guide the study from the new knowledge that is identified from the data.

Ngarruwan Ngadju is committed to meeting the Sustainable Development Goals set by the United Nations. These goals provide a shared global framework of development priorities. The research under 'Lifelong health and wellbeing' corresponds to the following SDG: