The MOVE package allows users to build 3D models of the subsurface and calculate how much deformation has occurred in a region (due to plate tectonic movements). One of its main uses is to model what rocks looked like before they were deformed. The software is widely used by geologists in the resources industry, but is equally applicable to those interested in mapping the subsurface to map groundwater resources and for carbon dioxide sequestration – the software will therefore be a valuable tool for students wishing to pursue careers in a range of fields.

Dr Lloyd White from UOW's School of Earth, Atmospheric and Life Sciences says "the software will be an excellent resource for undergraduate and postgraduate research”.

“While the software is designed for use by the resource exploration industry, it can also simply be applied to understand more about the 3D geometry of the ground beneath our feet.”

Earth science students will be able to take advantage of the software from February 2020. 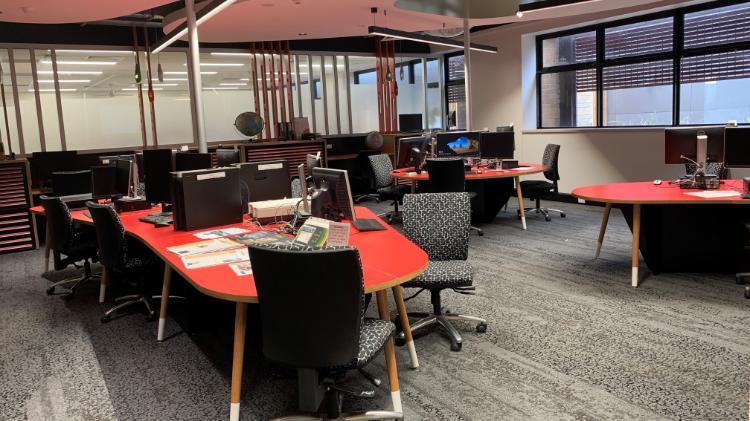 Leadership lessons from Rotheragate: The decision to head south, orca whales and smashing through the ice

In the spirit of insightful reflection, I tell the story of 'Rotheragate', an on-the-fly leadership development experience on the largest all-female expedition to Antarctica.

The setting was a journey down the Antarctic Peninsula, an inner journey toward becoming better leaders, and an epic adventure. Our goal was to reach Rothera, a British research station at 67° south, the southernmost point of the journey. On the way, we were working to heighten the influence and impact of our work as scientists through the Homeward Bound strategic leadership in science initiative. Read more...

Dr Sarah Hamylton and Rafael Carvalho have teamed up with Dr Rowena Morris of the NSW National Parks & Wildlife Service to map vegetation changes at Big Island in the Five Islands Nature Reserve. This is part of a long term rehabilitation project at Big Island, which sits offshore from Port Kembla Harbour and has seen radical changes to its ground cover since the 1950s (see Figure 1).

Burrowing habitat of seabirds such as Little Penguins, shearwaters and petrels on Big Island has been impacted by invasive weeds, which trap nesting seabirds and limit access to ground suitable for burrowing.

This project, partly supported by GeoQuest, maps changes to weeds such as coastal morning glory and kikuyu grass over the course of a helicopter spraying program that began in 2016. A team of researchers including Honours student Nial Roder conducted an aerial drone survey of the island in April. This mapped in detail the distribution of vegetation across the island, providing a baseline for future monitoring in relation to further rehabilitation (see Figure 2 and video).

The School of Earth and Environmental Sciences is particularly excited to set up a monitoring protocol that uses images collected with aerial drones to help determine the effectiveness of rehabilitation measures on Big Island over the next 10 years. Figure 2. A mosaic of drone images of Big Island, acquired in April 2017 with a DJI Phantom 4 before the aerial weed spraying