As a boy growing up in Great Britain in the 1950s, Professor Richard Kenchington spent his holidays by the seaside. Those childhood experiences of exploring the rocky coastlines and discovering the marine “critters” that inhabited the shore would prove formative for the budding scientist.

At the time, marine biology was a relatively new field of study, but from those early days of exploring and adventuring, Professor Kenchington was drawn to a life spent in and around the ocean.

“I was good at finding critters, seeing how they survived and how they worked,” he recalls. “I was guided by my father. I remembered, particularly, holidays on the west coast of Scotland. It was an area that had been little researched at the time, so we made sampling equipment and dredged up parts of the subtidal seabed to see what critters we could find.”

Decades later, Professor Kenchington’s passion for the ocean, shows no signs of dimming. For the past 12 years, he has been a valued member of the Australian National Centre for Ocean Resources and Security (ANCORS) at the University of Wollongong (UOW). On Monday, 2 May, he was named an Emeritus Professor at UOW, in recognition of his immense contribution to research, learning and teaching at ANCORS, and his role as a mentor to up and coming researchers.

“I was stunned, totally surprised when I found out that I was to be an Emeritus Professor,” Professor Kenchington said. “I am very grateful to my colleagues for nominating me. I thought I was past that sort of honour.”

That meeting led to B.Sc Marine Biology at QMC, MSc from the University of Wales and  a role in establishment of the newly opened James Cook University, in Queensland, Australia, where the Great Barrier Reef would be at his doorstep. He left for a two-year contract, aboard a P&O cruise liner. If he didn’t like the job or Australia, he could return the same way he came. 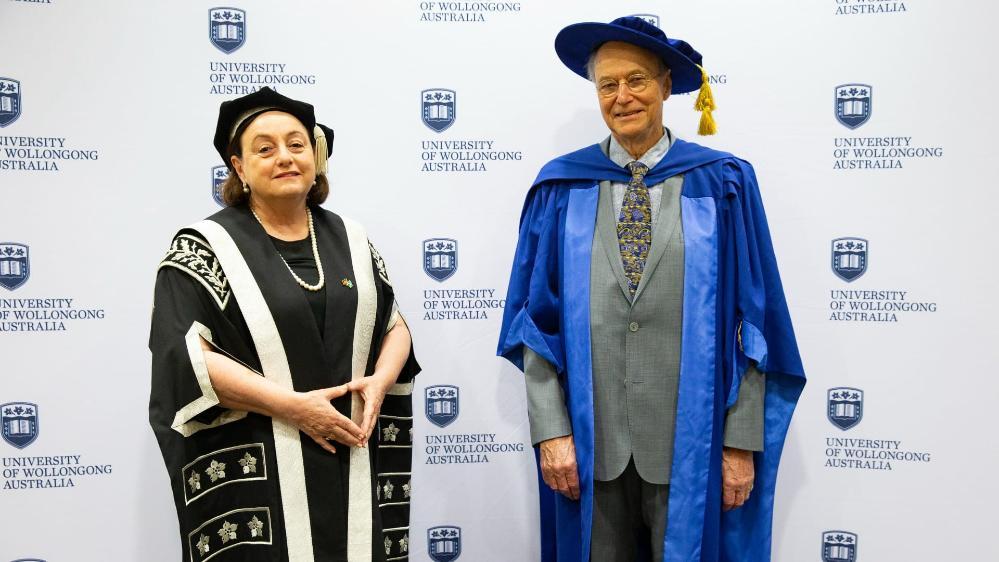 But the beauty of the region, and the chance to explore the creatures of the Great Barrier Reef – specifically, the Crown of Thorns starfish – drew Professor Kenchington in and he never returned to live in the United Kingdom.

“Marine biology was a very new field, and it was very exciting to be part of it.  I had a tenured university position with a research project on a zoologically fascinating muddy intertidal species.

“When I was offered the fellowship for the crown of thorns study, my mentor at the time, with my interests at heart, advised me not to go to a short-term project, which was dangerously political and thus career threatening,” he said with a laugh.

That passion for exploration and research translated into a passion to protect the reef and in 1975, he became a founding scientific staff member of the Great Barrier Reef Marine Park Authority.

His tenure saw the Marine Park Authority grow from a small and largely experimental regulatory body, established by the Australian Government to provide for conservation and reasonable use of the reef, to being a respected environmental management agency – the first true large marine park in the world.

Professor Kenchington’s team was the architect of the marine spatial planning system, integral to the operation and management of zoned multiple use marine protected areas. This was the first use of these systems in the world and they now represent the standard approach to marine park management worldwide. His subsequent book describing the operation of such systems is still regularly cited 30 years after its publication.

“Due to my work with the Marine Park Authority, I became involved with the International Coral Reef Initiative, a global partnership that protects coral reefs and their ecosystems.

“I’ve seen coral reefs in most part of the world, the Galapagos was one of the highlights.  My work has taken me everywhere. I’ve shaken hands with presidents and heads of state, which was just amazing for a boy from seaside Britain.”

At a time when many would have been winding down their careers, Professor Kenchington instead decided to use his vast knowledge and passion for research to teach the next generation of marine scientists.

He was first associated with the Centre for Marine Policy at UOW in 1994, and in 2010, he joined UOW’s Australian National Centre for Ocean Resources and Security (ANCORS), where he would spend the next decade contributing to research and teaching.

“I was drawn to the wide range of disciplines at ANCORS, all focusing on similar problems. It has a very strong element of law.”

“The science is important but without transdisciplinary engagement we can't manage (marine) species but we can hope to use the lessons of science to manage what humans individually and collectively do to or for them.

“I’ve been fascinated by the coastal research that has been underway at ANCORS, at the pressures that are being imposed on marine environments around the world. It has been a pleasure and a privilege.”

In 2020, Professor Kenchington retired from ANCORS, but he remains active in the research space, continuing to publish on issues of sustainable and effective management of the world’s oceans.

He is a valuable mentor to researchers and PhD students, a role that he clearly relishes, and remains passionate about how people can continue to make in-roads in the fight to protect the world’s most valuable resource – the marine environment.

“Changes take generations to happen. Young people see the importance of sustainability and protecting our oceans. People are more aware now of the threats of ocean warming and climate change, and how we can make a difference.

“I’m still that boy who holidayed at the seaside. I’m retired, but I’m still interested in what’s going on and that won’t change.”