Fossil discoveries reveal the cause of megafauna extinction

Australian palaeontologists today (Monday 18 May 2020) announced the discovery of new extinct megafauna that lived until 40,000 years ago in tropical northern Queensland.

The research team concluded that extreme environmental change was the most likely cause of the megafauna’s extinction, and that humans alone could not be blamed.

The fossils were discovered at an area near Mackay called South Walker Creek. It is the youngest megafauna site in northern Australia and was once home to at least 16 species of megafauna.

The findings, published in the open access scientific journal Nature Communications, outline how the successive loss of water flow, intensified drying, increased burning and vegetation change created the conditions to drive the extinction of at least 13 species of super-sized megafauna species, including five reptilian megapredators, a marsupial “lion” and the world’s largest wombats and kangaroos.

Professor Anthony Dosseto from UOW’s School of Earth, Atmospheric and Life Sciences helped analyse the discoveries made at the site. He said the team used a range of techniques to get robust ages on the megafauna fossils.

“We measured chemical elements uranium and thorium in fossil teeth to determine the age of giant wombats,” Professor Dosseto said.

“We found ages for these giant extinct animals of about 25,000 years. This is similar to what another lab involved in the study found using the same technique on other teeth.

“Combining all different techniques used in this study, we found an average age of 40,000 years for the youngest fossil deposit, with possibly even younger ages.” 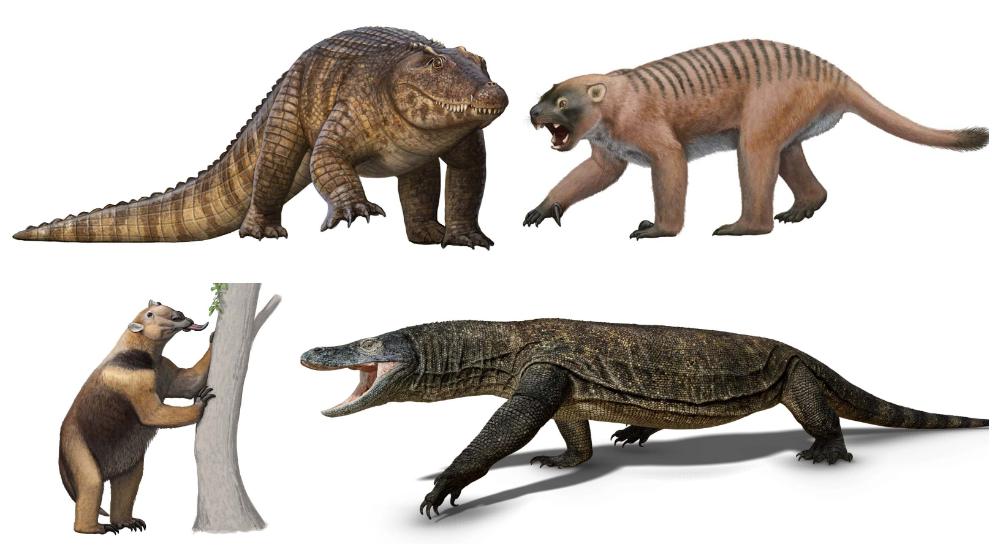 Queensland Museum palaeontologist Dr Scott Hocknull, who led the study, said there was still more research to come out of the site,

“The megafauna at South Walker Creek were uniquely tropical, dominated by huge reptilian carnivores and mega-herbivores that went extinct around 40,000 years ago, well after humans arrived onto mainland Australia,” Dr Hocknull said.

“We cannot place humans at this 40,000-year-old crime scene, we have no firm evidence. Therefore, we find no role for humans in the extinction of these species of megafauna.

“Instead, we do find that their extinction is coincident with major climatic and environmental deterioration both locally and regionally, including increased fire, reduction in grasslands and loss of freshwater. Together, these sustained changes were simply too much for the largest of Australia’s animals to cope with.”

“Our study shows that Australia megafauna was alive and well in Queensland later than previously thought,” he said.

“At this time, humans have been in the area for thousands of years. Our new ages for extinction also show it’s a time of major environmental change and increased aridity.

“No doubt humans would have hunted megafauna and had it for dinner. But these new results show that humans alone didn’t drive megafauna to extinction; climate and environmental change was also a big driver.” 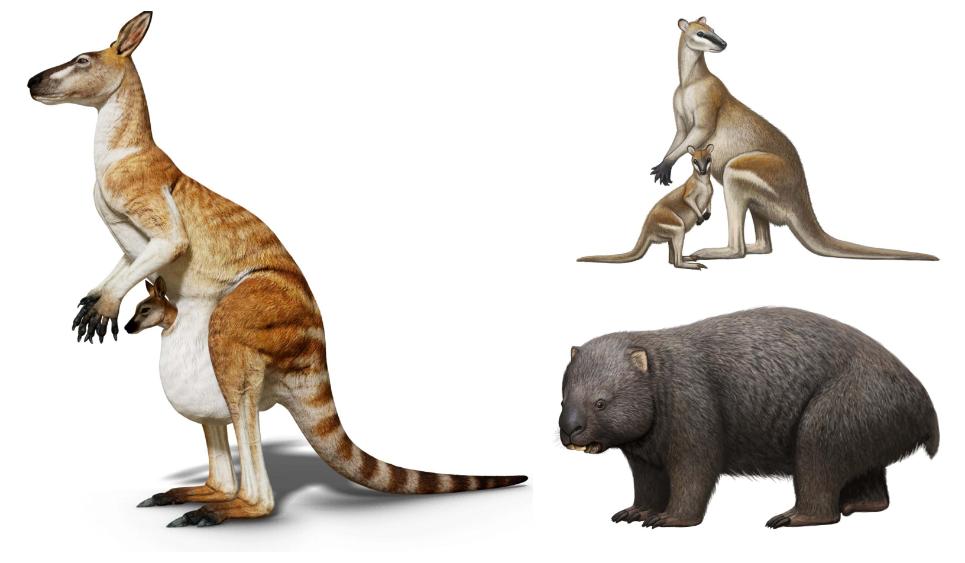 The South Walker Creek site was the stomping ground for a diverse range of megafauna including several new species, which are yet to be formally described.

One highlight from the site was the discovery of the remains of a kangaroo that stood 2.5 metres tall with an estimated mass of 274 kg, making it the largest known kangaroo of all time. Other herbivore species found at the site were four other kangaroo species, two wombats, one palorchestid, two diprotodontids and the emu.

Carnivores found at the site were the marsupial “lion” (Thylacoleo), three crocodile species (an extinct freshwater croc around 7-metres long; a relation to the modern salt water crocodile; and a land-dwelling crocodile) and two giant lizard species – a 6-metre long lizard named Megalania, and another giant lizard, similar in size to the Komodo dragon (2.5-metres).

The fossils were discovered in 2008 by the Barada Barna people during a cultural heritage clearance at the South Walker Creek site, which is operated by BHP Billiton Mitsui Coal (BMC).

This site is located 40 kilometres west of Nebo and through a partnership with Queensland Museum Network, there has been a systematic excavation since 2008 that has revealed spectacular never-before-seen megafauna fossils ranging from minute fish scales to colossal limb bones.

“The team that discovered these finds back in 2008 had no idea of how great a discovery it was. With the help of Queensland Museum we have discovered more and more animals from that time.” 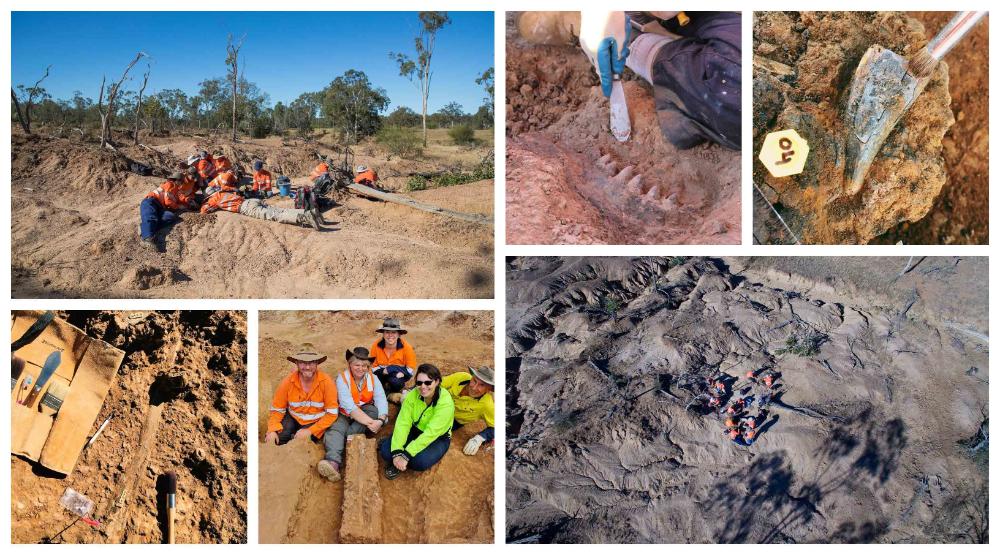 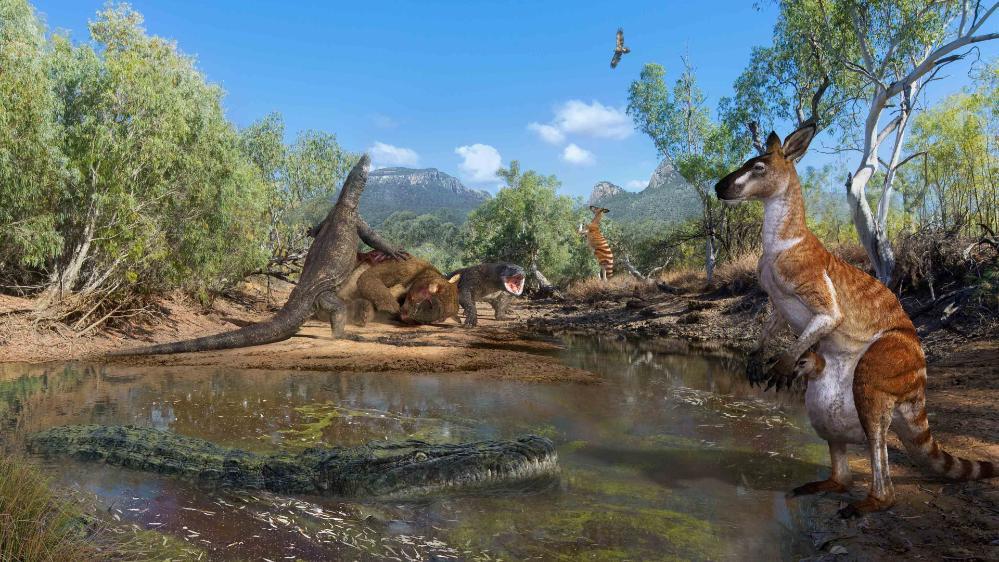